Exhibitions - The Islands of New York: Photographs by Accra Shepp

Since 2008, photographer Accra Shepp has been documenting the coastlines of the five boroughs of New York City, with the intention of visiting all of its forty islands with his large format camera. Shepp takes numerous views on site documenting the maritime nature of these zones where underbrush meets concrete and water. In the studio, the resulting 4” x 5” color film negative sheets are digitally scanned, edited and merged together into panoramic images that are printed by the artist as archival ink jet prints. Sixteen large format multi-paneled images, some spanning more than 10 feet in length, have been selected for this exhibition.

The Islands of New York: Photographs by Accra Shepp includes striking images that often depict remote areas reminiscent of the rocky coasts of Maine, or others that recall urban backwaters found from Baltimore to Boston. The familiar often feels new in photographs of the shorelines of Governors Island, Staten Island and Manhattan, while the city’s lineage as a major seaport is emphasized by the artist’s explorations of working shipyards on Staten Island and sailing communities on City Island. This constantly shifting geography reveals the often hidden areas of the water’s passages, and the people that inhabit these peripheral neighborhoods bordering vacant lots and wetlands. The Islands of New York series, estimated by the artist to conclude in 2016, will provide an unprecedented comprehensive visual catalog of 150 photographs that uncover what is often hiding in plain sight among the City’s coastlines. Ultimately, Shepp’s images raise awareness of the fragility of our city’s precious ecosystems where bird sanctuaries in Jamaica Bay, gritty industrial sites dotting the Gowanus Canal and new high rises in Williamsburg and Greenpoint share an uneasy truce between the wild and the tamed.

Accra Shepp, born in 1962 in New York City, is based in Queens. Shepp has participated in numerous solo and group exhibitions in the US and abroad, and his work can be found in the permanent collections of The Museum of Modern Art, The New York Public Library, The Whitney Museum of American Art, The Victoria and Albert Museum, London, The Art Institute of Chicago, Museum of Fine Arts, Houston, The Studio Museum in Harlem, The Spencer Museum of Kansas University, the Walther Collection, Wellesley College, The Art Museum-Princeton University and the Museum of the City of New York and the Museum of the City of New York, as well as in numerous books and publications. He has received a fellowship at Princeton University through the Atelier program, an Artadia grant, a Senior Fulbright Fellowship in Indonesia, two New York Foundation for the Arts Fellowships, a residency at Civitella Ranieri, Umbria, Italy, a grant from the Greenwall Foundation and a residency at Light Work, Syracuse, NY. Shepp earned a Master’s Degree in Art History from the Institute of Fine Arts, NYU with a concentration in conservation of art and a B.A. in Art History and Studio Art from Princeton University.

This exhibition has been organized by Louise Weinberg, Registrar, Archives Manager and Curator. 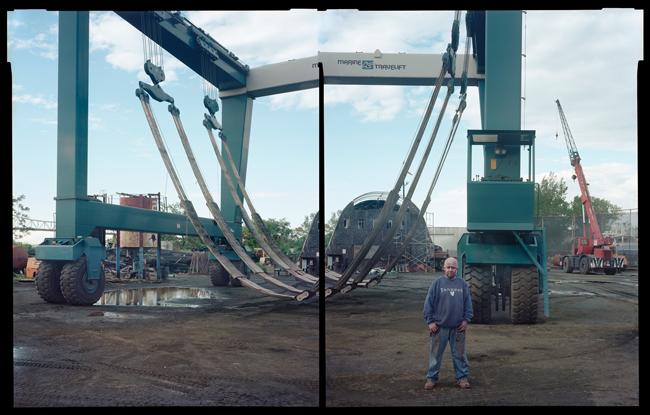 The Islands of New York: Photographs by Accra Shepp is supported in part by the New York City Department of Cultural Affairs and New York State Council on the Arts with the support of Governor Andrew Cuomo and the New York State Legislature.

The artist would like to thank the following institutions and individuals without whose support this exhibition would not have been possible: Art Matters Foundation, Peter Kasovitz and K&M Camera, Michael P. Falcone, Guy Bradley, John J. Wood, Allison Fultz, Damon Hemmerdinger, Emmet and Edith Gowin, and, Archie and Garth Shepp.