Exhibitions - Panorama: The Mapping of Prediction

The Queens Museum of Art proudly presents Panorama: The Mapping of Prediction, an exhibition of Stephen Talasnik’s architecturally inspired drawings, on view September 28 through November 30. Including thirteen pieces from Talasnik’s Panorama series, measuring up to twelve feet in length, the exhibition captures his trademark use of architectural forms, transforming the monolithic into the intimate, and the structurally complex into the fantastical and futuristic. Installed in the same space as the Museum’s Panorama of the City of New York, built as the world’s largest architectural scale model for the 1964 World’s Fair, the exhibition presents Talasnik’s own musings on architecture and design juxtaposed with the model that inspired his artistic career.

In 1964, among the millions of people who flocked to Flushing Meadows Corona Park for the World’s Fair, was Stephen Talasnik, then a nine year old boy from Philadelphia. There, Talasnik was exposed to a temporary city of pavilions with modern architecture, a futuristic monorail connecting them and a vision for what the coming decades would hold. It was this experience that sparked Talasnik’s fascination with futuristic design and in turn has fueled an artistic career that has evolved to reflect inspiration from da Vinci’s inventions and Piranesi’s didactic wonders, to Hugh Ferris’ skyscrapers and St. Elia’s transportation centers.

“If there was ever a moment of divine inspiration, it would be the instance I saw the General Motors’ Futurama exhibition and the Panorama of the City of New York at the 1964 Fair,” said Talasnik. “A lifelong obsession with visionary architecture was established at the Fair and I started doing drawings and sculptures of future cities after wandering through the Pavilions.”

Panorama: The Mapping of Prediction captures Talasnik’s affinity for architecture and the future, and also presents the artist’s use of the panoramic format. The panorama, whether utilized by painters in the 15th or 16th centuries or more contemporarily by photographers, allows large spaces to be depicted on a more intimate scale. While Talasnik’s early panoramic work drew inspiration from the predella panels he encountered while living in Rome, it also grew out of a desire to encapsulate the largest possible space and represent it to the viewer in the smallest possible arena. Where Renaissance painters immortalized massive battle scenes, and 19th and 20th century photographers examined themes such as urban development, Talasnik has used the format to capture the monolithic – urban landscapes, labyrinthine transportation systems and forms from the World’s Fair – and present it to viewers as “an exaggerated letterbox in which to envision the spirit of the future and to harness the majestic components of the Utopian landscape.”

“From an artistic standpoint, Stephen Talasnik’s drawings are impeccably rendered and conceived, evoking masters from past eras,” said Tom Finkelpearl, Executive Director of the Queens Museum. “From the Museum’s point of view, it is a singular opportunity to show an artist’s work in the context of the very site that inspired that work decades ago. Furthermore, it is exciting for us to present this series of work against the backdrop of the Panorama, which is seen daily by hundreds of people, including many children not unlike the child Stephen was when he first saw this model.”

Originally from Philadelphia, Stephen Talasnik attended the Rhode Island School of Design and the Tyler School of Art, including a year of graduate study through Tyler in Rome. His early interest in drawing was inspired by visionary architecture, specifically the work of Hugh Ferris, Antonio St. Elia, the Italian Futurist, and Georgi Krutikov, an architect of the Russian avantgarde. Industrial designers Raymond Lowery and Norman Bel Geddes also informed his work, and as a student at RISD, Talasnik studied black and white theory with photographers Harry Callahan and Aaron Siskind. He received a National Endowment for the Arts grant that enabled him to return to Italy where he started a series of architectural predella drawings. The panorama drawing series was started when he was living in Tokyo. After his Japan experience, he moved to New York City although he exhibited primarily in Europe and Asia. More recently, he has started to make wooden and bamboo sculpture inspired by the linear infrastructure associated with intuitive engineering. 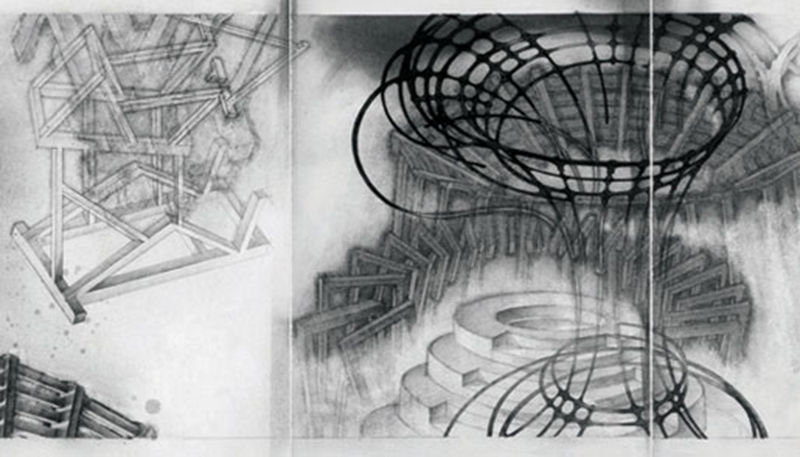 Stephen Talasnik, PANORAMA: The Mapping of Prediction is supported in part by the New York City Department of Cultural Affairs and the New York State Council on the Arts. The exhibition is organized by the Queens Museum of Art. Special thanks to Marlborough Gallery.