Queens Museum | The Eye in Matter

Exhibitions - The Eye in Matter

Robert Seydel
The Eye in Matter

The art of Robert Seydel (1960–2011) is a rare hybrid species of the visual and literary that dissolves boundaries between the lyrical and the narrative and the acts of reading and looking. In a body of work marked by an unrelenting sense of play, Seydel collapses the historical past with the notated, emotional present and mingles actual personages with fictional characters. Much of his work is made under the auspices of various personas in place of the singular first person perspective.

Beginning in 2000, Seydel created this series of works using the alter ego Ruth Greisman, a resident of Queens, New York, who was inspired by his aunt of the same name. “Robert Seydel: The Eye in Matter” features a definitive selection from this fictional archive with a selection of Ruth’s “journal pages” and almost one hundred collages (many previously unpublished and unexhibited), and Seydel’s notebooks, open to pages that reveal glimpses of the process of making this visionary body of work.

An exceedingly solitary man who spent untold hours each day reading, studying, writing and making art, Seydel used the notebooks not simply as a diary or record but as a means of selecting, arranging and composing. Many of Ruth’s journal writings are first drafted there—merging daily life and dreams as Seydel traces the leaps of her acrobatic consciousness from the banal to the hallucinatory, the melancholic to the ecstatic.

In Ruth’s collages, Seydel applied his combinatorial magic to debris from the street, forgotten photographs and faded scraps of paper, transforming earthly detritus into illuminated arrangements whose meanings shape-shift as each collage is “read.” These works invite the viewer into a world made from the daily, devotional practice of making art, into a world in which the work of art is life itself. As Ruth writes: “I’ll invent who I am, against what is. My time and name: a Queens of the mind.

Robert Seydel was a prolific artist and writer who left behind a richly layered and highly original body of work after his sudden death at the age of fifty. Book of Ruth (Siglio, 2011) is the first publication of a selection of these materials and a rare view into a multi-layered approach to collage, drawing, photography, narrative and lyric writing. Seydel rarely exhibited his work in his lifetime other than in a solo exhibition at the CUE Foundation in New York City and in “Five Contemporary Visual Poets” at the Wright Exhibition Space in Seattle. A beloved professor at Hampshire College in Amherst, MA, for more than a decade, he also served as curator at the Photographic Resource Center at Boston University for a number of years.

Robert Seydel: The Eye in Matter is curated by Peter Gizzi, Richard Kraft and Lisa Pearson, and organized for the Queens Museum by Louise Weinberg, Registrar, Archives Manager and Curator. 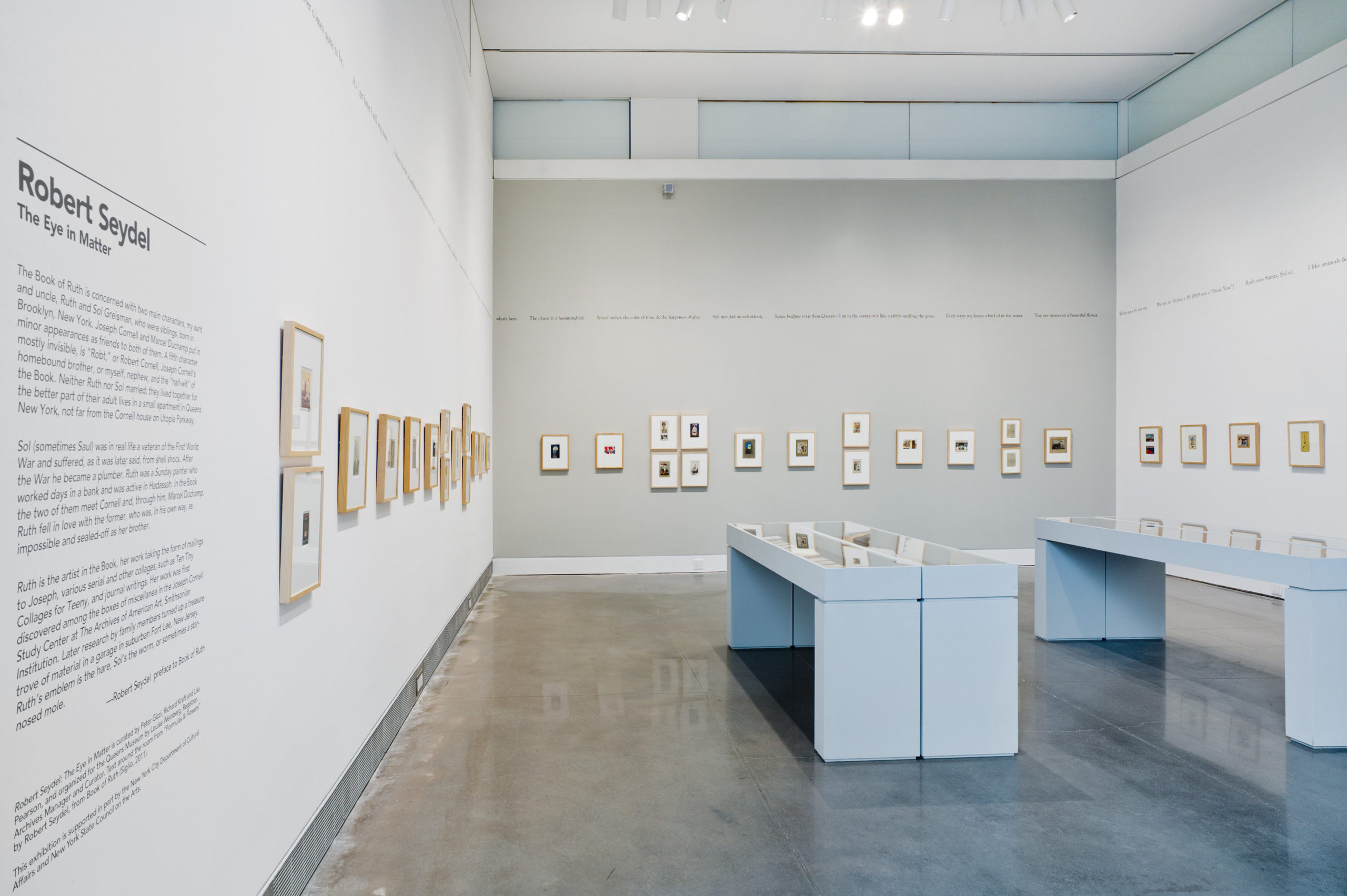 — “A Picture is Always a Book: Further writings from Book of Ruth”