Joan Jonas began her work in the experimental atmosphere of chance encounters and cross disciplines that fed the volatile and creative Sixties. A working knowledge of sculpture and art history and a passion for film equipped Jonas to enter an arena where dance and music had become increasingly spatial, and the visual arts more experiential. The relative availability of video revolutionized the possibilities of recording the moving image and very quickly the disparate elements of Jonas’s individual vocabulary were realized to formulate what is known as her performance installations.

Joan Jonas: Five Works assembles a specific selection of works from four decades of production. These five performance installations are arranged like stage sets, in which the viewer may experience the work from inside the piece and from multiple points of view. Organic Honey’s Visual Telepathy and Organic Honey’s Vertical Roll, among Jonas’s most important works from the early 1970s were included to represent the corner stone of her exploration of her own image against that of her alter ego. This work became a spring board for the development of female roles found in Volcano Saga, where nature and desire combine in the service of a female construct, Gudrun, or in Lines in the Sand, where Helen is interchanged with the politics of commerce. A repertoire of specific objects or props anchor the narrative structures that originated with The Juniper Tree, a fairy tale from the Brothers Grimm, and become more psychological and complex in subsequent pieces such as the 13th century Pagan-Christian legend, Sweeney Astray translated from the Irish by Seamus Heaney. Revolted by the thought of known places… is considered by the artist as “a work in progress.”

A few earlier videos and one new tape Waltz, some rarely seen drawings and photographs, as well as two smaller installations punctuate the exhibition for indexical reference and historical continuity. Joan Jonas: Five Works is the artist’s first major exhibition in her native New York. 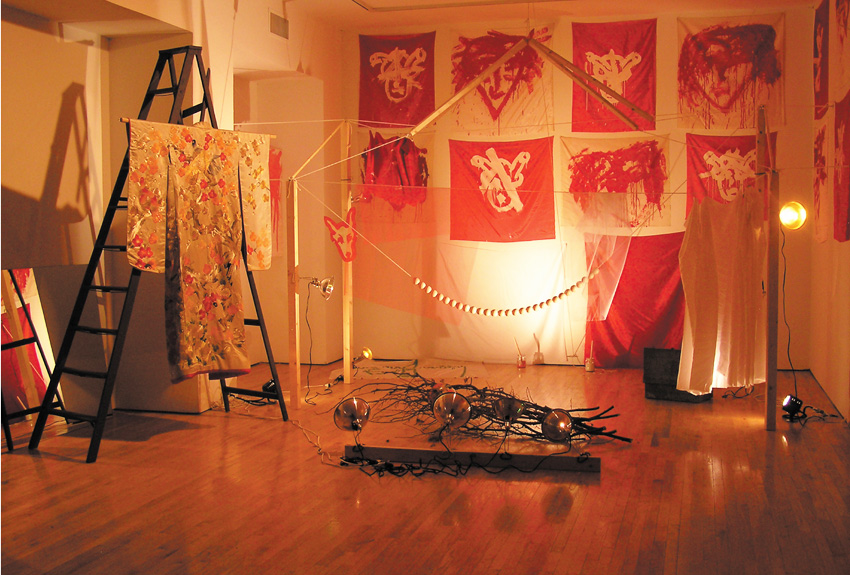 The exhibition and catalogue Joan Jonas: Five Works are made possible by the generous support of The Andy Warhol Foundation for the Visual Arts, The National Endowment for the Arts, The Lily Auchincloss Foundation, The New York State Council on the Arts, Samson Technologies Corporation, and The Florsheim Foundation.