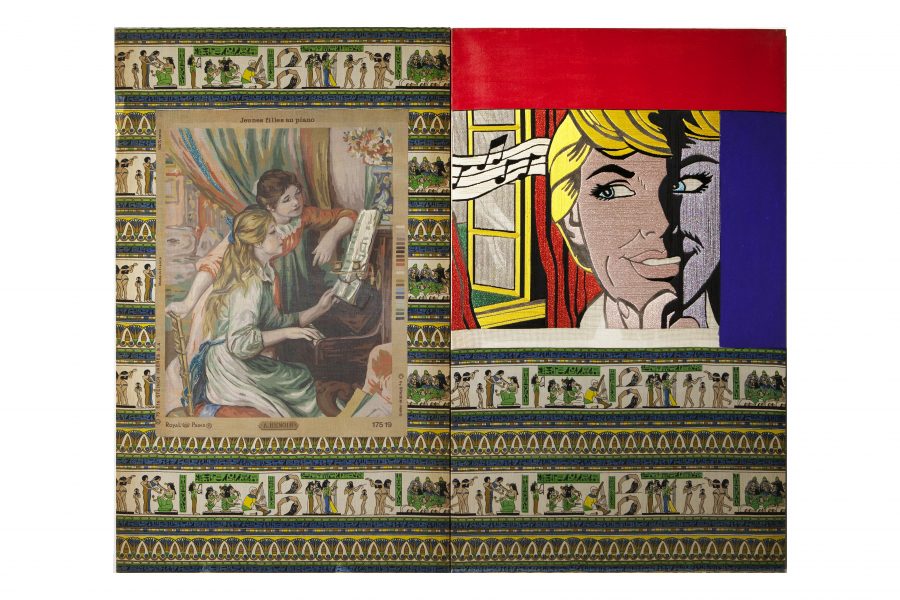 Join us for a special conversation with curator Yasmin Ramirez and artists Elaine Reichek and James Romberger to discuss the art and life of Nicolas Moufarrege. The talk centers on Moufarrege’s time in New York City, where he moved in 1981 and became a central figure in the burgeoning East Village arts scene. Speakers reflect on their friendship with Moufarrege, the impact of the AIDS epidemic on his art and others’, and the resonance of his work today.

This talk is co-organized with Visual AIDS on the occasion of Nicolas Moufarrege: Recognize My Sign. Visual AIDS utilizes art to fight AIDS by provoking dialogue, supporting HIV+ artists, and preserving a legacy, because AIDS is not over. In 2016, Visual AIDS published a volume of its DUETS series on Moufarrege’s work, featuring a conversation between Elaine Reichek and Dean Daderko.

Elaine Reichek has been using thread as a core element in her work since the early 1970s, and was a pioneer among conceptual artists in rethinking the role of craft in the fine arts and investigating alternative narratives and histories. Her most recent solo exhibitions include Sight Unseen at Marinaro, New York (2019); Now If I Had Been Writing This Story at Vienna Secession (2018); Invisible Citings at the Addison Gallery of American Art, Phillips Academy, in collaboration with sculptor Jeanne Silverthorne (2017); and Minoan Girls at Shoshana Wayne Gallery, Santa Monica, CA (2016). She lives and works in New York.
Elaine and Nicolas A. Moufarrege were close friends from 1980 until his death in 1985. She co curated a memorial exhibition of Nicolas’s work at the Clocktower Gallery in 1987, along with Bill Stelling, Tim Greathouse, and Cynthia Kuebel.

James Romberger’s pastel drawings are in many private and public collections including those of The Metropolitan Museum of Art and Harvard University. He was the co-director with Marguerite Van Cook of the seminal 1980s East Village installation gallery Ground Zero. He is the Eisner-nominated cartoonist of Post York and co-author of the graphic novels 7 Miles a Second, The Late Child and Other Animals and Aaron and Ahmed. He has written about comics, film and art for Publisher’s Weekly, Comics Journal, The Beat and LAAB. He teaches art at Parsons and Marywood University.

Yasmin Ramirez holds a Ph.D. in Art History from the Graduate Center of the City of New York. Currently an independent curator, Dr. Ramirez has collaborated on curatorial projects with The Bronx Museum, El Museo Del Barrio; The Loisaida Center; The Studio Museum in Harlem, Franklin Furnace and Taller Boricua. Her critically acclaimed exhibitions and panels include: Martin Wong: Human Instamatic (2015); Presente: The Young Lords in New York (2015); The Puerto Rican Art Workers and the Construction of the Nuyorican Art Movement (2014); Re-Membering Loisaida: On Archiving and the Lure of the Retro Lens (2009); Esto A Veces Tiene Nombre: Latin@ Art Collectives in a Post-Movement Millennium (2008); Voices From Our Communities: Perspectives on a Decade of Collecting at El Museo del Barrio (2000); Pressing the Point: Parallel Expressions in the Graphic Arts of the Chicano and Puerto Rican Movements (1999). Yasmin Ramirez’s published essays include: The Young Lords Way (2015); Snap Shots: A Short History of the Association of Hispanic Arts (2013); The Creative Class of Color in New York (2009); The Activist Legacy of Puerto Rican Artists in New York and the Art Heritage of Puerto Rico (2007); Puerto Rican Light: To Allora and Calzadilla (2006); Nuyorican Visionary: Jorge Soto and the evolution of an Afro-Taino aesthetic at Taller Boricua (2005); and Parallel Lives, Striking Differences: Notes on Chicano and Puerto Rican Graphic Arts of the 1970s (1999). She is currently writing a book on art movements in East Harlem.