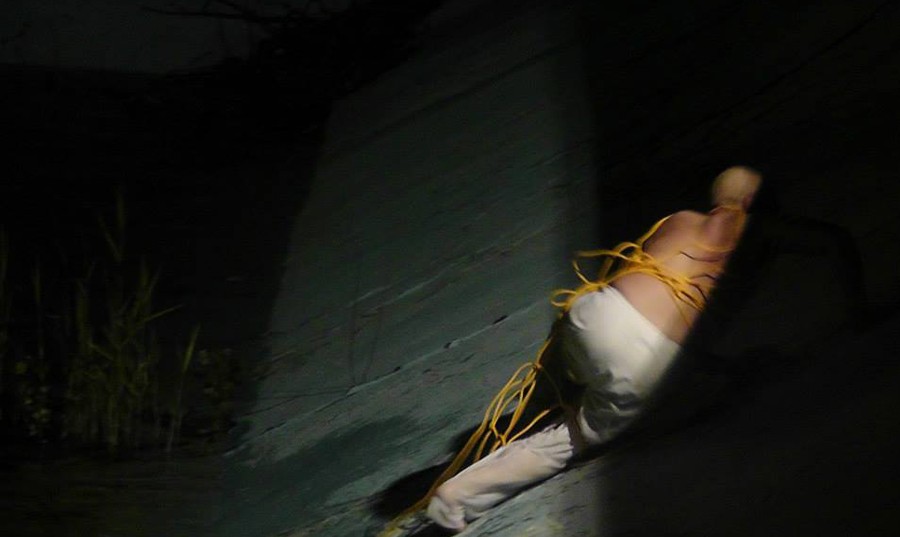 February’s  program consists of performances, dialogue panels, and tactical actions that address authoritarianism, control, abuse of power, and belligerent decisions that affect a democratic process and people.  The first event of the series is an exploration in art, activism, social awareness, and civic responsibility.  Participating artists were selected from a recent Open Call in the NYC tri-state area. Artists who responded to the call offer with their work alternative ways to look at and manifest about the present state of American politics. 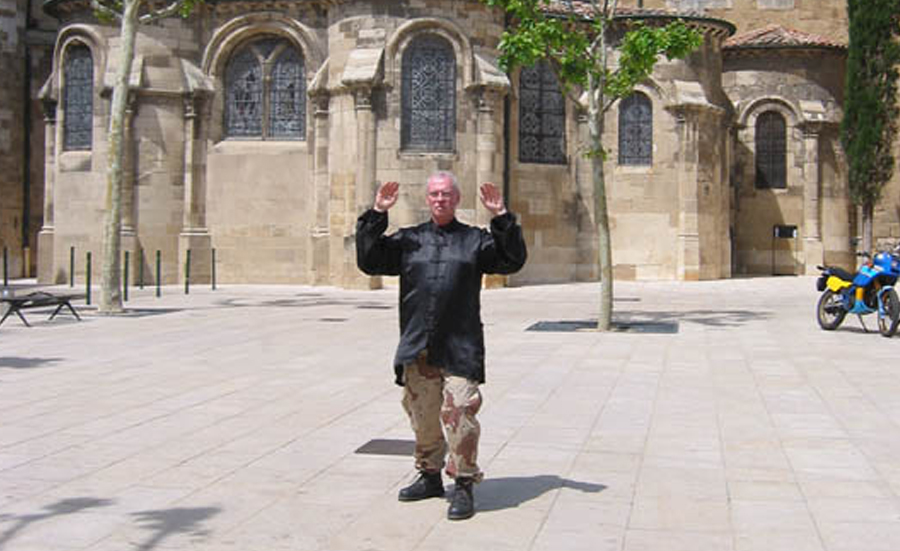 Bill Beirne is best known for his video installations and performance work, which are most often sociologically based. Beginning with the “streetworks” movement of the late sixties and early seventies his installations sought to move the immediacy of street performances into the art context through video surveillance and sculptural means. Exhibitions in New York include; The Whitney Museum of American Art, (1979, 1991) The International Center of Photography 1993 and 1994), The Sculpture Center (1994)  PS1 /MoMA (1976,1977,1979,1997,1999,2000 and 2007) and The New Museum (1981). He has also exhibited at the List Visual Arts Center at MIT (1997) The TV Gallery, Moscow (1999, 2000), and Art 3, Valence Fr. (2004 and 2005).  Beirne received a 2009 Commission for Madison Square Trapezoids, a video installation performance work for Madison Square Park.In 2015, several works were acquired for the Smithsonian American Art Museum’s permanent collection and presented in the exhibition “Watch This.” 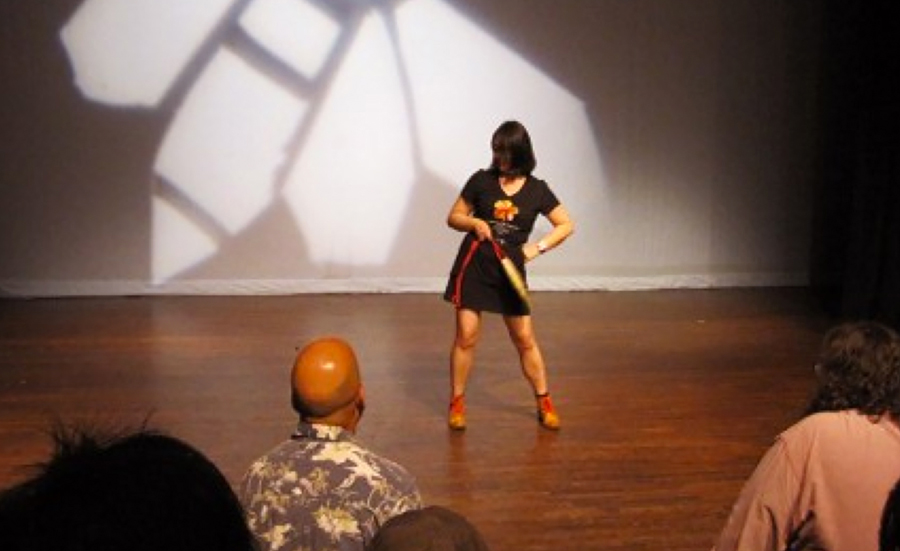 Irene Chan, Ch’An Press is a multidisciplinary artist who works conceptually in performance, installation, print media, and book arts about Ephemera, Environment, and Experience. Her works are exhibited internationally and are in 70 public collections. Ch’An Press has self-published prints and 30 limited-edition artist books to date. She is the recipient of grants and awards from the National Endowment for the Arts, New York Arts Council, Maryland State Arts Council, Washington D.C. Commission of the Arts and Humanities, fellowships to 14 artist residencies, and has exhibited and performed in 76 venues in the last ten years. In her first one-person spoken word performance, she told personal stories about her warped view on appearance due to Asian American experiences, history of stereotyping, and watching a lot of television. The stories were told with satire song, language play, and sculptural books worn on and against the body. Currently she is telling stories of her early experience with sex education with a garden of delights and erotic dessert. 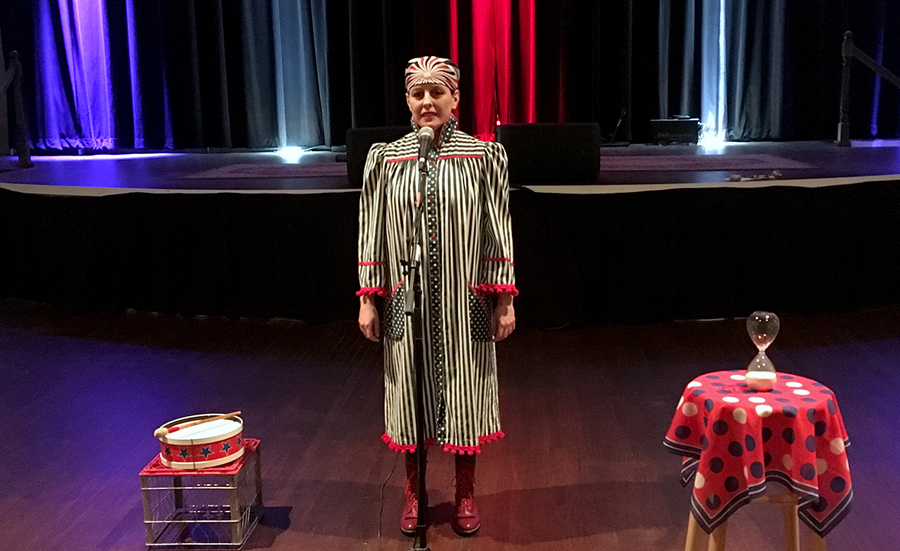 Alison Crocetta maintains a hybrid art practice that draws on her experience working within the realms of sculpture, performance art and the moving image. Crocetta’s work has been performed, exhibited and screened in Curitiba, Brazil, NKD in Dale, Norway, Berlin, Germany and Cardiff, UK and in a range of US venues such as the Contemporary Arts Center (CAC) in Cincinnati, Ohio, the Socrates Sculpture Park in Queens, NY, The Aldrich Contemporary Art Museum, EMPAC in Troy, NY, MIT List Center for Visual Arts, Weston Art Gallery, The Bronx Museum of the Arts and Harvard University. Her honors and awards include an Individual Excellence Award in the category of Interdisciplinary / Performance Art from the Ohio Arts Council in 2015, the 2011-2012 Franklin Furnace Fund for performance art, and a 2010-11 EMPAC DanceMovies film commission. She was an artist in residence at the Nordic Artists’ Center in Dale, Norway, the Agora Collective in Berlin, Germany, the Art and Technology program at the Wexner Center for the Arts in Columbus, Ohio and Harvestworks Digital Media Arts Center in New York City. She was a fellow at The Radcliffe Institute for Advanced Study at Harvard University and the recipient of an NEA grant in sculpture. Crocetta received an MFA Tyler School of Art, attended the Skowhegan School of Painting and Sculpture and earned a BFA degree from the NYSCC at Alfred, University. Crocetta is currently an Associate Professor in the Department of Art at The Ohio State University. 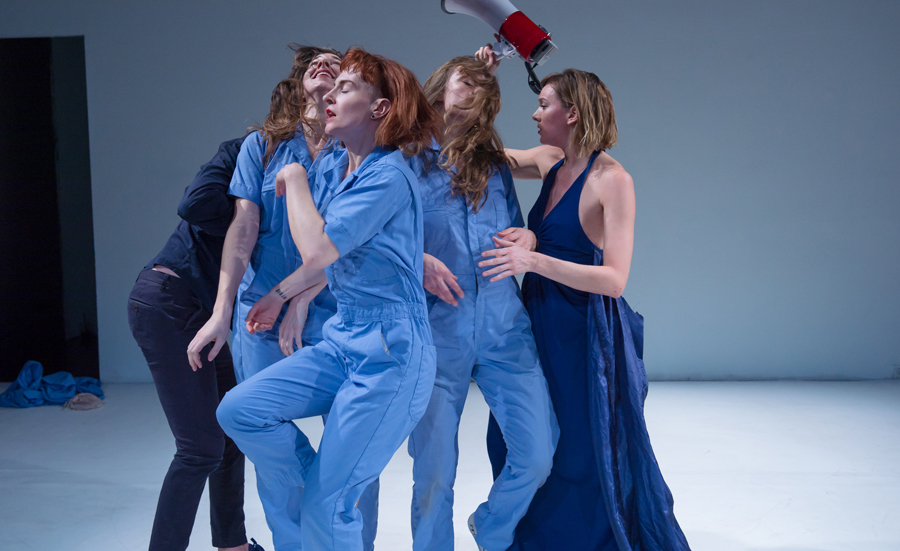 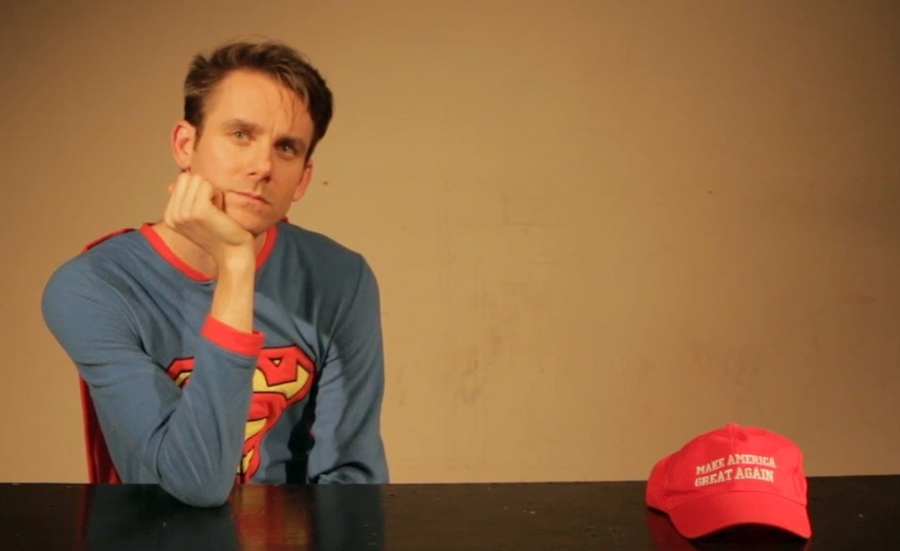 Patrick Gaughan is a poet, performer, and artistic director of Xfinity Theater. His writing has appeared in The Believer, BOMB, Boston Review, & others. He has performed work at Dixon Place, AS220, The Poetry Project, GlassBox Gallery, & APE Gallery. He teaches at Smith College & Western New England University, & curates the P L A T F O R M lecture series with poet Jon Ruseski. His chapbook of performance essays, The Impersonators, is forthcoming in 2017 from Factory Hollow Press. 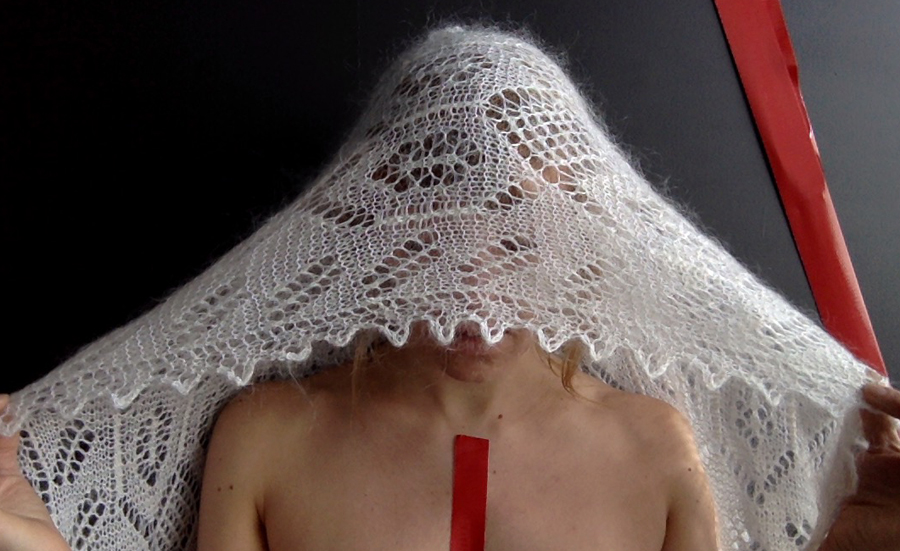 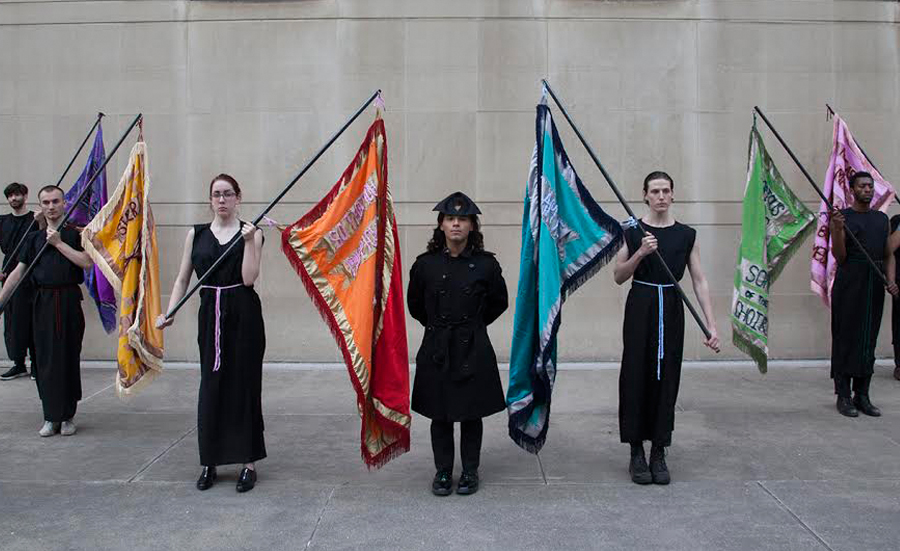 Luis Mejico is multidisciplinary artist and independent curator. He has performed and exhibited work at the Art Institute of Chicago, Museum of Contemporary Art of Chicago, Mana Contemporary Chicago, Links Hall, Zhou Brothers Art Center, The Oak Park Art League, The Uptown Arts Center, and Jan Brandt Gallery, among others. He recently curated NINETEEN: THE REUP, an exhibition of marginalized artists for the Chicago Loop Alliance’s ACTIVATE series. His first solo show, “I will hurt you,” recently opened in February 2017. 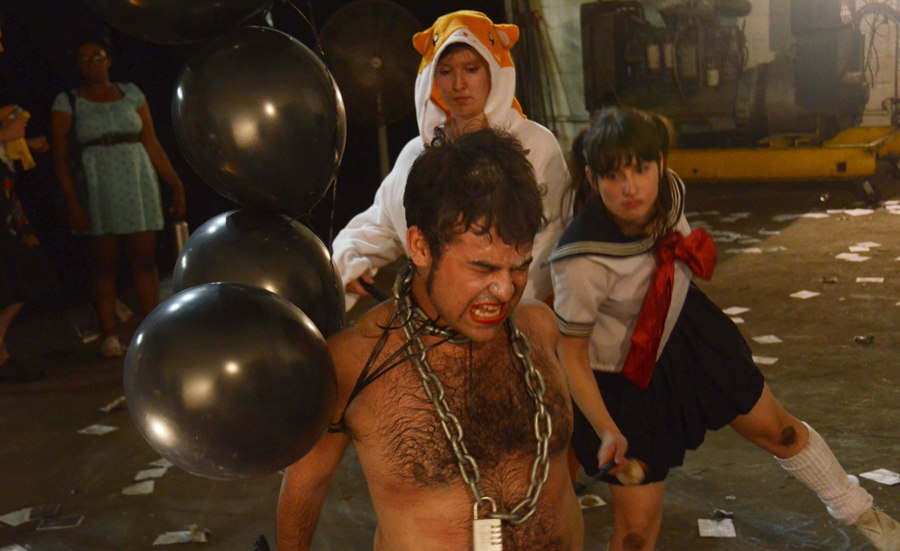 Geraldo Mercado is a Brooklyn based performance and multi-media artist.  He was born in Yauco, Puerto Rico and raised in Westfield, Massachusetts.  He holds a Bachelors of Science in Directing for film from Fitchburg State University, he moved to New York City in January 2008 to pursue a career as an artist and work at Exit Art, a pioneering art space in Manhattan. Mercado began his time there as an intern in the video department, later that year he became the Video Production Manager, a title he held until Exit Art closed after their 30 year anniversary show in 2012. Having created over 125 performances between 2012 and now, his work involves using extreme physicality to explore themes of identity, race, religion, politics, and popular culture.  Lately he has been using performance to comment on the artistic process itself, creating meta-textual works while directly addressing the audience. In 2014 he was included in El Museo Del Barrio’s retrospective show “Museum Starter Kit: Handle with Care.” In 2015 he had his first solo show “In The Universes Where I Died”, hosted by Animamus Art Salon at Gallery Sensei.  His second solo show “…And What Will We Do When We Get There”  debuted at CloyingParlor in 2016. 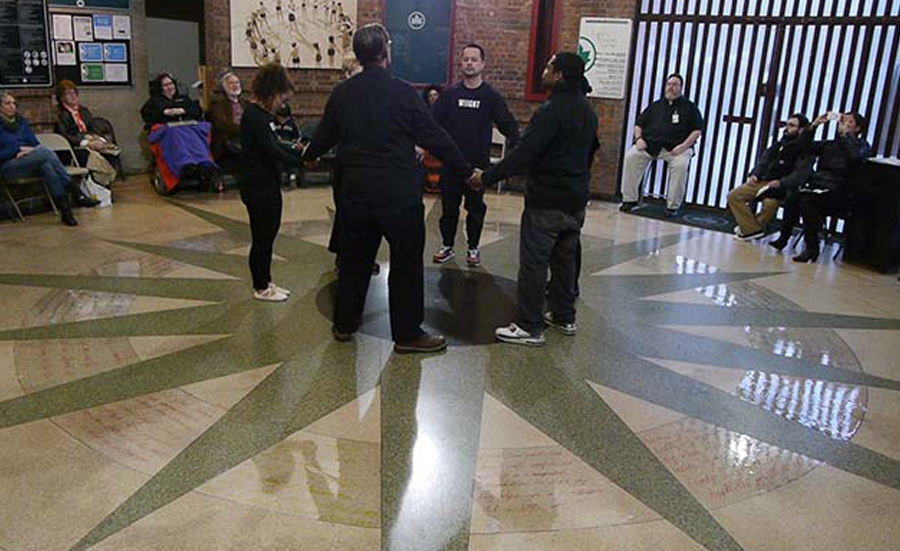 Mandy Morrison is an interdisciplinary artist whose projects mix video and performance with notions of  ‘self’ in relation to how the body projects physicality and forms of narrative within varying contexts. Her concepts have used archetypes –and stereotypes– of myth and gender as a springboard to present the physical and psychological world of conditioning and desire. Her work often respond to the idea that the body exists as a ‘function’ that participates, accommodates, or defies its cultural context. Morrison has shown internationally in galleries, museums, and festivals including the Whitney Museum of American Art, the Brooklyn Museum, Kunstlerhaus Hamburg, the Festival for Music and Art, Vienna and CINESONIKA in Vancouver. She has been a Visiting faculty at Pratt Institute, and Rutgers University and grants include fellowships from Illinois Arts Council, and New York State Council on the Arts, as well as residencies from the University of Wisconsin, and Ohio’s Wexner Center for the Arts. Her recent projects involve utopian and military architecture, rural youth, and urban break dance artists. She has directed two performance projects at Dixon Place in New York City that were performed and co-written with community participants. 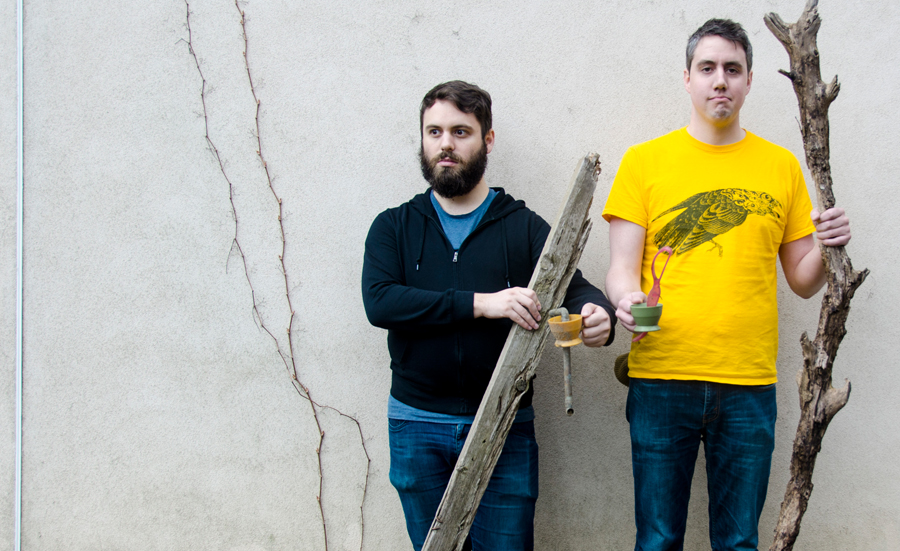 Gregory Paul and Conor Perreault work collaboratively in sound art and performances. In their performance, they will examine the growing polarization of the American people, pushed by political forces toward opposite ends of the ideological spectrum. Through the use of various electronic doohickeys and noisy gizmos, they will attempt to capture the harsh and confusing political environment that plagues the US. Frequency, volume, timbre, and attitude will be traversed in the performance to reflect the frustration inherent in determining modern leadership and the distrust of one’s neighbor that idealogues foment in the pursuit of power. The artists will take symbolically different attitudes toward creation in the moment, creating an argument with sound alone. The audience will be prompted to disrupt their division, cueing the artists to switch positions and walk in each other’s proverbial moccasins back towards the unity and friendship that lies at their core of both their collaboration and the American experiment. Conor Perreault is a New Haven noise dad and occasional librarian who conjures holy rackets for secular ecstatics with electronic doohickeys and voice. His sound work relies on uncertainty, reverie, and humor to explore communication and human connection outside of the normal modes. Gregory Paul is an electronic and acoustic sound artist from Connecticut and working out of Brooklyn. His art focuses on using sonic, performative environments that transform traditional space and consciousness into an abstract communication between the artist and the audience and other artists. He often works with Conor Perreault, a childhood friend. 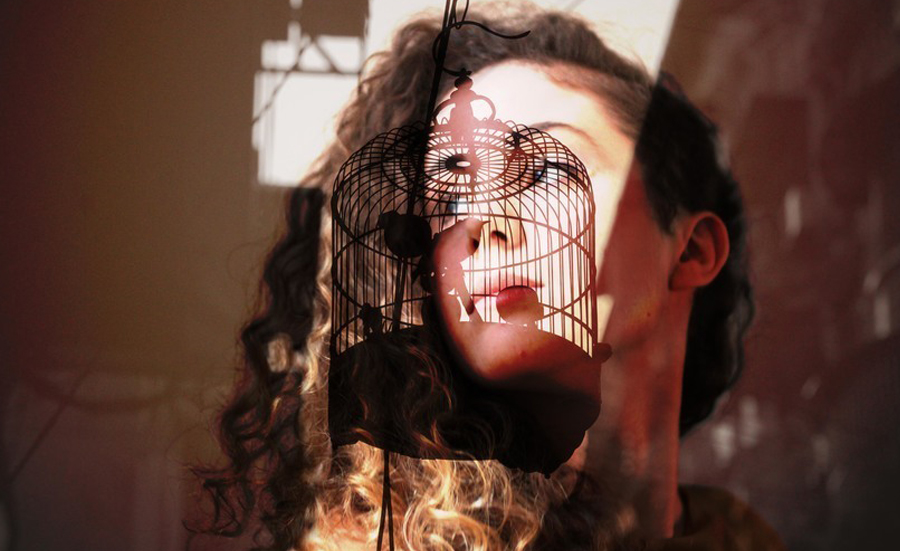 Christine Stoddard is a Salvadoran-Scottish-American writer and artist who lives in Brooklyn. Her visuals have appeared in the New York Transit Museum, the Ground Zero Hurricane Katrina Museum, the Poe Museum, and beyond. In 2014, Folio Magazine named her one of the top 20 media visionaries in their 20s for founding the culture magazine, Quail Bell. She also is a Puffin Foundation grantee, Artbridge winner, and Library of Virginia REMIX artist. 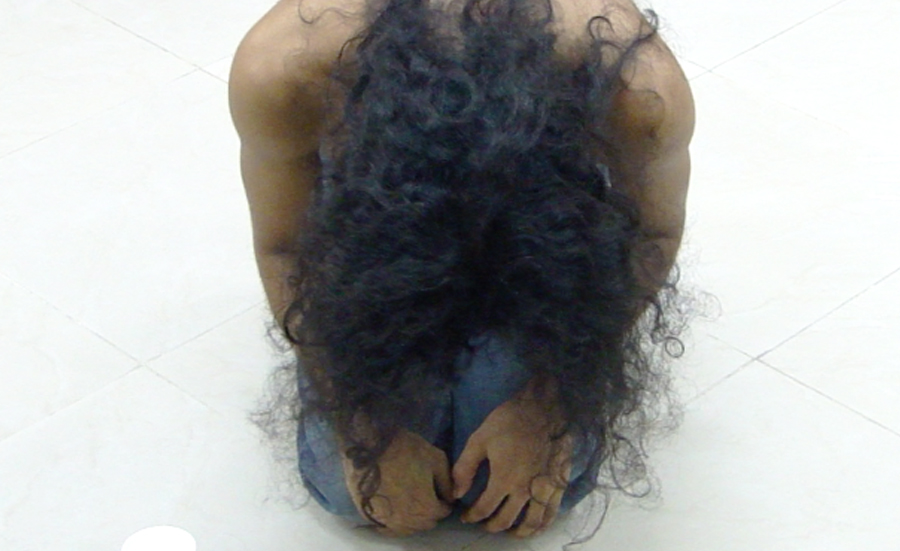 Carlos Luis Vargas was born in Ecuador.  He moved to the US in 2016, and currently lives and works in Newark, NJ. He graduated as a Visual Artist from Arts Institute of Ecuador ITAE. His experience includes a couple of solo exhibitions in his country and some other participations in Festivals and Contests with video-photo performance and installation artworks. Winner of the VI Non visual Arts biennale of Guayaquil (2014), Second place at Premio Brasil Arte Emergente in Quito (2013); lately he has turned his proposals to live action art with the help of Cuerpo Pacífico and FAAC (2015), spaces who got the ecuadorian performance scene together. 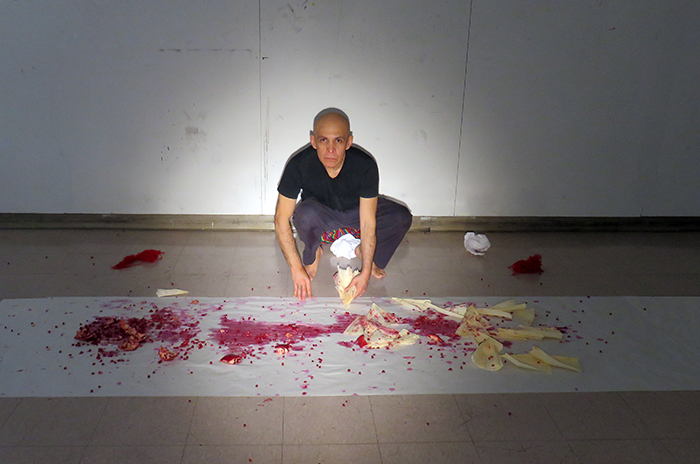