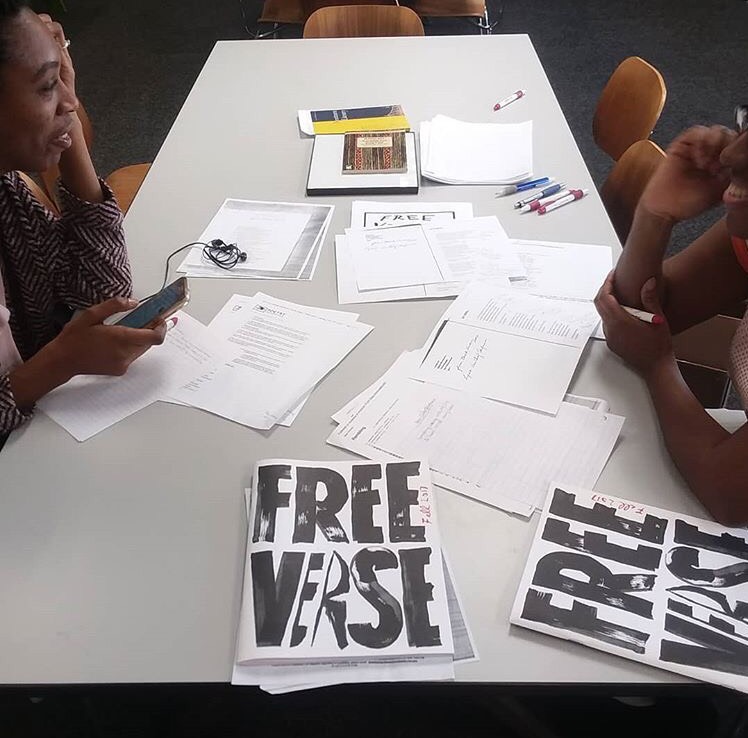 Public Panel Discussion on the Incarceration System and the Power of Telling Your Story
with Akeem Browder, Jacob Cohen, and Free Verse presenting Phantom Messages

Please join us on Saturday, July 28 for a public discussion about the recent decreed closing of Dispatches from the Ghost Ship, an exhibition of over 500 portrait drawings of inmates at Rikers Island made over the past 4 years, which opened in the Community Partnership Gallery on July 8th.
In response to the compulsory closing of the exhibition Dispatches from the Ghost Ship, we invite you to join us for a public panel on the Power of Telling Your Story with the artist Jacob Cohen, Akeem Browder – founder of Shut Down Rikers and the Kalief Browder Foundation, and featuring Phantom Messages, a program of the Free Verse Open Mic Series with Dave Johnson and Sherese Francis.
Akeem Browder is a social justice advocate and agent of change. The Bronx native works to honor the legacy of his brother Kalief Browder, and mother Venida Browder by working with elected officials, lawyers, doctors, college students and community based organizations to change laws, policies and regulations that devastate poor communities and families that have been impacted by mass incarceration and solitary confinement in State prisons. He is the founder of Shut Down Rikers, and the Kalief Browder Foundation. A civil engineer by trade, he is currently traveling the country promoting the six-part Spike TV docu-series Time: The Kalief Browder Story.
Jacob Cohen is a Brooklyn-based experimental cellist, visual artist, and educator. Since 2014, he has been working with adolescents and young adults incarcerated on Rikers Island. He brings his cello directly to the housing units, often playing for those that have received infractions for violent behavior while there. After about a year he started to draw portraits of them and their surroundings. At first they were very basic, but over time complexity and nuance began to develop and the drawings began to capture something deeply personal about the subjects, and revealing of the system in which they are ensnared. These images are of youth, ages 16-21, currently incarcerated and awaiting sentencing. Dispatches from the Ghost Ship was an installation of portraits and landscapes of life on Rikers Island, created by artist Jacob Cohen. The exhibition consists of over 500 observational drawings made over the course of four years of Cohen’s work, teaching and performing on Riker’s, as well as a selection of drawings made in collaboration with young inmates. There are no photos taken of the inmates during their incarceration other than their mug shot. No cameras are allowed onto the island. This exhibition at the Queens Museum is the first public showing of these images.
Free Verse, a weekly poetry workshop and open mic at NYC’s NeONs in probation centers, turns waiting time into writing time by giving poets from all walks of life a safe space to write about their personal experiences. Poets share experiences with the criminal justice system and family shelters; and experiences with racial profiling and other social issues. Free Verse provides a platform for writers to spread their messages in a world that may often treat them as invisible or dismisses their observations as figments of the imagination. This reading and open mic will ask Free Verse poets and the public to share words about experiences that may not be easily seen or talked about in our communities, and to write on-site responses to the current Queens Museum exhibition, “Dispatches from the Ghost Ship.”
This event is part of the Free Verse Open Mic Series, public poetry events sponsored by NeON Arts & The New York City Department of Cultural Affairs. Produced in collaboration with Yulia Tikhonova, Director, Dr. M. T. Geoffrey Yeh Art Gallery, St. John’s University.
Dispatches from the Ghost Ship was curated by Sidd Joag and produced by ArtsEverywhere.
ArtsEverywhere is a platform for artistic experimentation and exploration of the fault lines of modern society. It creates open spaces for dialogue about the value that the arts bring to all aspects of our communities and societies —not only from the points of view of artists, cultural workers, and arts institutions, but also globally from the perspectives of policy makers, ecologists, children, city builders, social justice leaders, farmers, educators, and activists. ArtsEverywhere believes that the arts must be a central component of individual and collective experiences of the world and a vital part of all social and political processes, including governance, justice, activism, economies, and education. The lines of inquiry that form the backbone of the online platform include Alternative Learning, Decolonization and New Colonialisms, Economic Dignity, Feminisms and Queerness, Language and Migration and Artist Rights.
+ Add to Calendar