The Queens Museum’s summertime staple, Passport Thursdays: International Dance, Music, and Film Series, returns for another exciting season featuring some of the many international locales that fuel Queens’ cultural and artistic vitality. This year’s adventure includes stops in Ecuador, Ethiopia, India, and Taiwan. So leave your baggage at home and bring a picnic blanket out to Flushing Meadows Corona Park for an evening in the shadow of the majestic Unisphere. There will be free artmaking workshops for families before the films start, our cafe will remain open until 8pm, and we won’t let a little rain spoil the fun, we’ll just move the whole event indoors.

Ephraim is a young Ethiopian boy who recently lost his mother as a result of drought. His father leaves him and his beloved pet sheep, to be looked after by distant relatives, Ephraim isn’t very good at farming, but he has a hidden talent: he is an excellent cook. One day, his uncle tells him that they have to sacrifice his sheep for the next religious feast. The young boy, however, is ready to do anything to save his only friend and return home. View the trailer here. 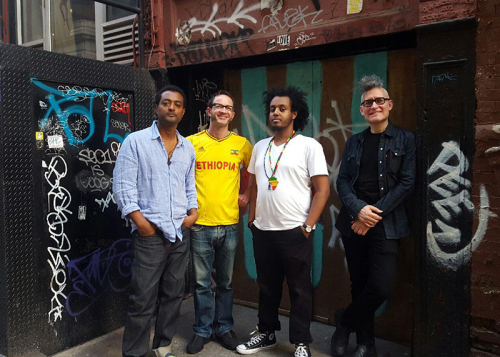 Arki Sound: Formed in NYC in 2009 by an electric bass player Samson Kebede Arki Sound is a New York City based collective interpreting the “Golden Age” of Ethiopian jazz from the 1960s and 1970s. Just as the Ethiopian scene incorporated various influences, both indigenous as well as from American R&B, jazz and pop, so does Arki Sound bring their own backgrounds – from jazz to punk funk to free improv – to create their own flavor of Ethiopian groove. In Amharic, አርኪ [Arki] translates as “quencher” or “satisfier”; Arki Sound endeavors to serve its listeners and dancers the finest in spontaneous Ethiopian flavored groove.

Passport Thursdays is generously made possible by lead sponsor TD Bank, in addition to the Queens Museum’s official airline, Delta Air Lines, and Astoria Bank. We are also grateful for the support provided by the New York City Department of Cultural Affairs and New York State Council on the Arts with the support of Governor Andrew Cuomo and the New York State Legislature.