The Queens Museum’s summertime staple, Passport Thursdays: International Dance, Music, and Film Series, returns for another exciting season featuring some of the many international locales that fuel Queens’ cultural and artistic vitality. This year’s adventure includes stops in Ecuador, Ethiopia, India, and Taiwan. So leave your baggage at home and bring a picnic blanket out to Flushing Meadows Corona Park for an evening in the shadow of the majestic Unisphere. There will be free artmaking workshops for families before the films start, our cafe will remain open until 8pm, and we won’t let a little rain spoil the fun, we’ll just move the whole event indoors.

The colorful coming of age story of orphaned siblings Pari and her blind little brother Chotu who embark on a journey across Rajasthan to meet Bollywood star Shah Rukh Khan whom Pari hopes will restore Chotu’s eyesight. Watch the trailer here. 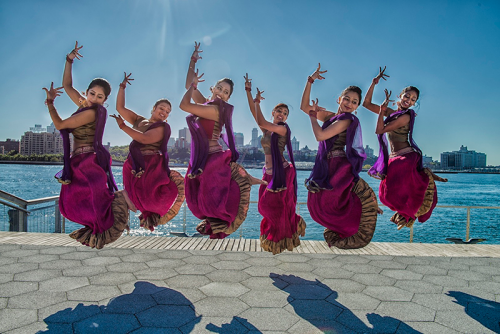 Ajna Dance Company was founded by Minila Shah to share authentic, artistic Indian dance with a global audience with a mission to inspire, entertain and educate. Its distinctive choreography blends film, folk, and classical styles in pieces that are rooted in classic Indian techniques blended with modern music and movement.

The Ajna Ensemble has had the honor of performing at the UN, on ABC’s Good Morning America, MoMA Film, The Rubin Museum, The Brooklyn Museum, Brooklyn Children’s Museum and Celebrate Brooklyn. The Ajna Dance School conducts ongoing classes for kids and adults in Manhattan and Brooklyn and presents workshops, residencies and assemblies at schools and colleges throughout the tri-state area. Follow them on social media at @ajnadance.

Passport Thursdays is generously made possible by lead sponsor TD Bank, in addition to the Queens Museum’s official airline, Delta Air Lines, and Astoria Bank. We are also grateful for the support provided by the New York City Department of Cultural Affairs and New York State Council on the Arts with the support of Governor Andrew Cuomo and the New York State Legislature.