The Queens Museum’s summertime staple, Passport Thursdays: International Dance, Music, and Film Series, returns for another exciting season featuring some of the many international locales that fuel Queens’ cultural and artistic vitality. This year’s adventure includes stops in the Philippines, Ecuador, West Africa, and North Africa. So leave your baggage at home and bring a picnic blanket out to Flushing Meadows Corona Park for an evening in the shadow of the majestic Unisphere. There will be free workshops for families before the films start and we won’t let a little rain spoil the fun, we’ll just move the whole event indoors.  Prior to each screening we will be premiering unique “teasers”  for State of Emergency (2017), a collective video installation project conceived in response to the current political crisis and composed of poetically-juxtaposed clips by more than 60 artists and filmmakers (Curators: Nina Felshin and Lenore Malen; Projection Designer: Ruppert Bohle). 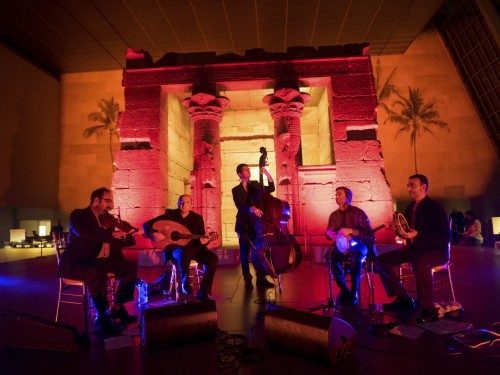 An Arab music and dance ensemble dedicated to presenting together the classical music and the dance traditions of Egypt. Alternating vocal and instrumental numbers with solo  dance numbers, Zikrayat’s mission is to highlight the diversity of Arab culture for mainstream Western audiences in an authentic, yet entertaining contemporary representation.

The meeting of the Blue and White Nile in Sudan is described as the longest kiss in history. At the site of this eternal kiss in Khartoum, the two rivers unite to become one. But as the Arab Spring was in full bloom, Sudan was about to split in two. The film follows six young Sudanese searching for their identity as their journeys take us up and down the White Nile, between North and South Sudan ahead of the country’s secession. Facing conflicting identities, youth in North Sudan grapple with a stale dictatorship while others in South Sudan hope to start over–but at what costs? For the first time a film gives a voice to Sudanese youth from different origins, Muslims and Christians. It is an intimate portrait of a complex society and its inevitable fragmentation.

Preceded by the short film Adam & Howa (Sarra Idris, Sudan, 2015, 8min.) A couple’s story becomes a metaphor for the relationship between the Sudanese diaspora who fled the country after political turmoil and those who were left behind.