The Queens Museum’s summertime staple, Passport Thursdays: International Dance, Music, and Film Series, returns for another exciting season featuring some of the many international locales that fuel Queens’ cultural and artistic vitality. This year’s adventure includes stops in the Philippines, Ecuador, West Africa, and North Africa. So leave your baggage at home and bring a picnic blanket out to Flushing Meadows Corona Park for an evening in the shadow of the majestic Unisphere. There will be free workshops for families before the films start and we won’t let a little rain spoil the fun, we’ll just move the whole event indoors. Prior to each screening we will be premiering unique “teasers”  for State of Emergency (2017), a collective video installation project conceived in response to the current political climate and composed of poetically-juxtaposed clips by more than 60 artists and filmmakers (Curators: Nina Felshin and Lenore Malen; Projection Designer: Ruppert Bohle). 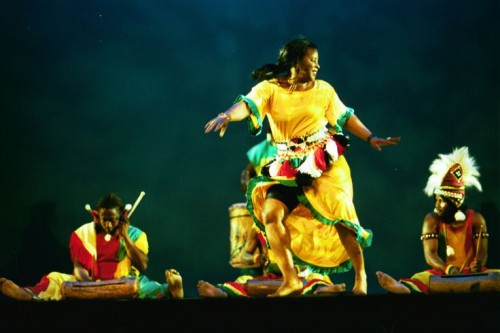 Mouminatou Camara founded Seewe African Dance Company in September 2005. For a decade, she was the principal dancer for the world-renowned dance company, Les Ballet Africans. She also performed with Les Ballet Djonllba and the Army Ballet. An instructor and performer of West African Dance and Drum, Mouminatou  has performed and taught workshops extensively in the USA, Spain, France, Belgium, Germany, Martinique and the West African countries of Senegal, Mali and the Ivory Coast. Having spent her life in Guinea, Mouminatou has stated that she has been dancing since she was in her mother’s womb.

Akounak tells the universal story of a musician trying to make it “against all odds,” set against the backdrop of the raucous subculture of Tuareg guitar. The protagonist, real life musician Mdou Moctar, must battle fierce competition from jealous musicians, overcome family conflicts, endure the trials of love, and overcome his biggest rival – himself. An homage to Prince’s 1984 Purple Rain, the film is both a window into modern day Tuareg guitar in the city of Agadez as well as an experiment in modern ethnographic filmmaking and new techniques of cross cultural collaboration. View the trailer here.