This month’s artists have been invited to participate in the program with new works that explore current concerns in contemporary American society. 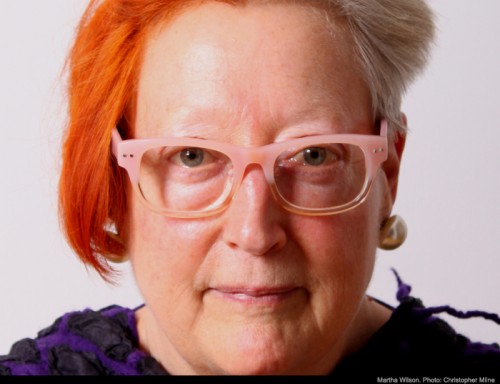 Martha Wilson is a pioneering feminist artist and gallery director, who over the past four decades created innovative photographic and video works that explore her female subjectivity.  She has been described by New York Times critic Holland Cotter as one of “the half-dozen most important people for art in downtown Manhattan in the 1970s.”  In 1976 she founded Franklin Furnace, an artist-run space that champions the exploration, promotion and preservation of artist books, temporary installation, performance art, as well as online works.  She is represented by P.P.O.W Gallery in New York. Martha Wilson received an Honorary Doctor of Fine Arts degree from the Nova Scotia College of Art and Design University in 2013.  She has received fellowships for performance art from the National Endowment for the Arts and the New York Foundation for the Arts; Bessie and Obie awards for commitment to artists’ freedom of expression; a Yoko Ono Lennon Courage Award for the Arts; a Richard Massey Foundation-White Box Arts and Humanities Award; a Lifetime Achievement Award from Women’s Caucus for Art; and the Audrey Irmas Award for Curatorial Excellence from the Center for Curatorial Studies, Bard College. 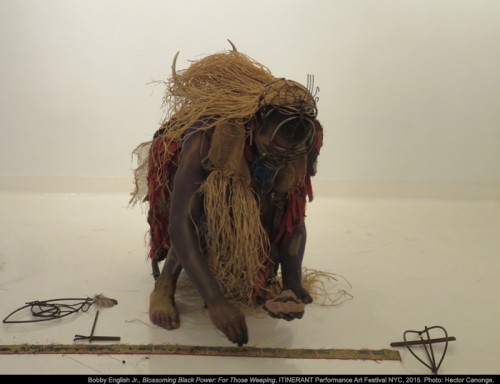 Bobby English Jr. creates empowering, yet self- destructive performances inspired by world mythologies, ancestry, identity, dreams, and the dualities of nature.His process is very laborious and exhausting, yet it is meditative and spiritual. While creating, and even after completion, there is a dialogue happening between the form and English’s body. The dialogue ultimately becomes mystic, almost ritualistic, thought-provoking performances that he feels are channeled from the many mythological archetypes that he understands both from his own life experiences and those of his ancestors. Often times, these performances become uncomfortable, alienating, dangerous, and painful. However, physical and/or spiritual distress aids English in connecting to his higher-self; sacrifice for enlightenment. English wants people to be inspired to connect with the divine nature within themselves, their personal mythologies, and be comfortable in the expression of their divinity, their true selves. The goal of his art is to create an atmosphere for conversation, understanding, and ultimately compassion for all people. English studied at the Maryland Institute College of Art in Baltimore and Studio Art Centers International in Florence, Italy. Since his first exhibition in 2011, English’s work has been shown in major Baltimore galleries, and Art Basel Miami in 2011. His Mothership Connection sculptures and performances were the subject of much praise, and have been shown in multiple exhibitions nationally. 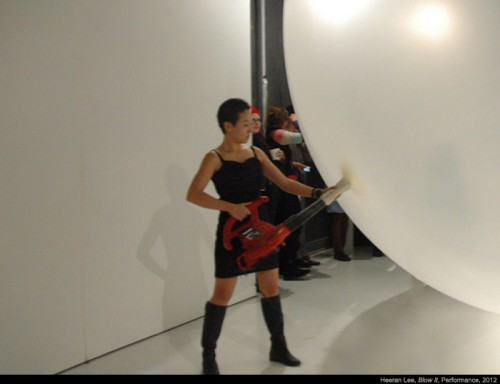 Heeran Lee is a performance artist whose body centered work explores private and public gestures of the Asian female body in the patriarchal power structure and investigates cultural marginalization. Her recent grants have included the ARKO Young Art Frontier from Arts Council Korea (2013), she was a Semi-finalist for the emerging artist prize from The Claire Rosen & Samuel Edes Foundation (2012) and The Anna Louise Raymond Fellowship (2012). Her work has been shown at Culture Station Seoul 284(Korea 2014), Grace Exhibition Space (New York 2013), The Watermill Center (New York 2012), Defibrillator Gallery (Chicago 2012), and Rockbund Art Museum (Shanghai 2011). She holds an MFA specializing in performance from the School of the Art Institute of Chicago and was a fellow artist of LEIMAY 2014-2015 at CAVE in New York. 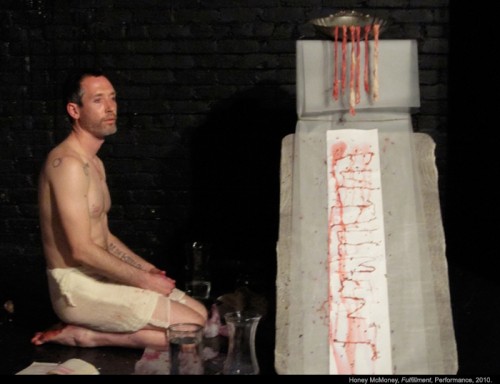 Honey Jernquist (Honey McMoney) is a conceptual artist, painter and performance artist. He lived in San Francisco for twenty years. He rather spontaneously started performing in 2009. Since then he has performed dozens of pieces on the street, in lobbies, in hallways, in bedrooms, in galleries, and occasionally theaters. He now lives in Brooklyn, and has recently completed a personal practice cycle in Union Square called End of Life Planning Starts Now. He strives with his work to create spacious vessels – experiences without specified meaning or interpretation. Since 2014, he has worked at MoMA as performance facilitator, performing and engaging the public around performance and interaction, for Lygia Clark: The Abandonment of Art, 1948-1988; James Lee Byars: 1/2 an Autobiography; Yoko Ono: One Woman Show, 1960-1971; and currently performing David Lamelas’s piece Time for Transmissions: Art in Eastern Europe and Latin America, 1960–1980. In 2016, he performed at Grace Exhibition Space as part of Performancy Forum Quinquennial; and in Berlin at Haus am Lützowplatz/Studiogalerie for You Can Feel It, curated by Jonny Star. He continues a personal practice he calls the form is formless. 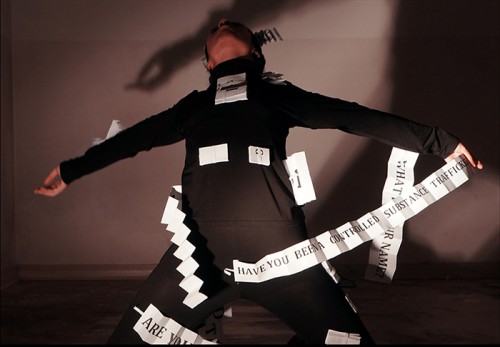 Veronica Peña was born in Spain and resides in Indiana.  Peña’s work explores the themes of absence, separation, and the search for harmony through performance art. Her recent work consists of experimental participatory performances that create shared moments amongst strangers. Peña earned her Bachelor of Fine Arts at The Polytechnic University of Valencia, Spain. She earned her Master of Fine Arts at Stony Brook University, New York, focusing on installation and performance art. Peña has exhibited in Spain, Germany, Italy, South Korea, and the United States. In New York, her work has been featured at The Lab Gallery (for Installation + Performance Art), at Times Square (Times Square Alliance), at the Armory Show 2010 (Gabarron Foundation), in the “13th DUMBO Arts Festival (DUMBO Arts Center), and numerous not-for-profit galleries. In Spain, her work has been exhibited at Casa de America (Madrid), Fundacion Antonio Saura (Cuenca), Museo Orus (Zaragoza), and Fundacion Caja Rioja (La Rioja) amongst others. She has been a recipient of the Socrates-Erasmus Grant, the Universidad Complutense de Madrid Fellowship, and a candidate for the Dedalus Foundation Grant. She has been an Artist-in-Residence at Vermont Studio Center, United States. She has published “The_Presence_Of_The_Absent”, a thesis about her body of work. 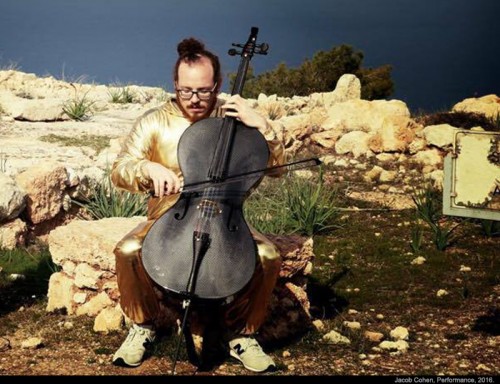 Jacob Cohen is a Brooklyn-based experimental cellist and street performer.  Since 2011 he has earned a living performing in the New York City subways, developing a unique style of improvisation that has grown out of a frustration with traditional cello music and a complimentary love of improvisation and performance.  Jacob creates original music for a live audience as a daily practice.  He explores the textures and capabilities of the instrument in a free form that comes from a combination of muscle memory, reflexes, and intuition.  He began to travel with his music in 2013, performing throughout Japan, Thailand, and India.  In 2014 he won Absolut Vodka’s Transform Today contest, leading to the creation of his project Cello Without Walls in which he has been performing and conducting workshops in prisons and jails throughout the northeastern United States. In 2015 Jacob was the recipient of a grant from the Vogler Foundation to create a music program for youth at Rikers Island’s Robert N. Davoren Complex.  Notable collaborations include a series of workshops with Polish sculptor Pawel Althamer and his team of international artists that have been conducted in contemporary art institutions in New York, Beijing, Warsaw, and Nicosia.  He collaborated with composer Rob Simonsen on the soundtrack for Foxcatcher, recipient of the Best Director award at the 2014 Cannes Film Festival. 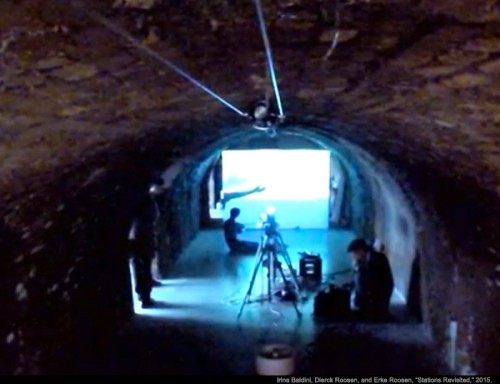 Irina Baldini, Dierck Roosen, and Erke Roosen
Irina Baldini trained as a dancer and worked at various art galleries as well as choreographing work for theatres and site responsively. At present she runs her own project, 4bid gallery, part of OT301 cultural centre in Amsterdam NL, of which Dierck Roosen has been the driving force for many years. Dierck creates installations that have a theatrical concept and most often contain video or film (S8 & 16mm). He brings absurdism in a chaotic, sometimes even purposely bad, performance setting. Since 2009 he focuses on producing only his own art pieces, with absurdism and fatalism being leading themes in his work. Often topics contain contradicting issues like the old versus the new or the futility of conformity against contemporary normality. Irina is lead by an interest in openings, beginnings, finding solutions to un-asked questions. In this way they meet, uninterested in established method, but method being necessary for one-time experiences. Interested in disposable formulas. Erke Roosen started dancing since the age of 4 at a local ballet school in the Netherlands and graduated with a Bachelor diploma starting an apprenticeship at Netherlands Dance Theater. In 2011, Erke decided to move to New York to study at Peridance Capezio Center in the Certificate Program under the direction of Igal Perry and Marlena Wolfe. She graduated in June 2013 and is dancing for the Peridance Contemporary Dance Company, Gwen Rakotovao Company and JP dance group in NY. Alongside her main career in dance, she is pursuing a freelance career in modelling. 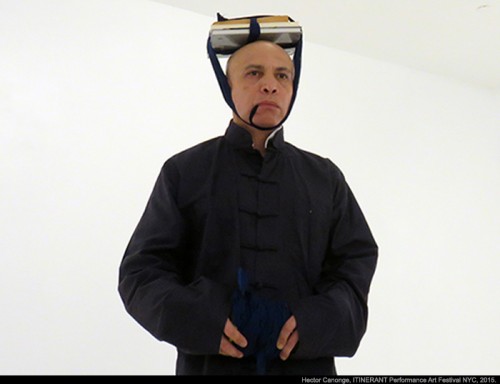 Hector Canonge is an interdisciplinary artist, curator and cultural entrepreneur based in New York City. His work incorporates the use of new media technologies, cinematic narratives, Live Action Art, and Social Practice to explore and treat issues related to constructions of identity, gender roles, psychogeography, and the politics of migration.  Challenging the white box settings of a gallery or a museum, or intervening directly in public spaces, his performances mediate movement, endurance, and ritualistic processes.  Some of his actions and carefully choreographed performances involve collaborating with other artists and interacting with audiences. His work has been exhibited and presented in the United States, Latin America, Europe and Asia. As cultural entrepreneur, Canonge started projects such as ARTerial Performance Lab (APLAB), an initiative to foster collaboration among performance artists from the Americas, PERFORMEANDO, a program that focuses on featuring Hispanic performance artists living in the USA and Europe, NEXUSURNEXUS a virtual platform for Live Action Art, and PERFORMAXIS, an international residency program in collaboration with galleries and art spaces in Latin America. He created, and organizes independently the annual Performance Art Festival NYC, ITINERANT. Canonge is the co-founder of QMAD, Queens Media Arts Development, a non-profit arts organization in Queens, NYC. As curator, he has organized exhibitions at Centro Cultural Santa Cruz, Queens Museum, Space 37 Gallery, and Visual AIDS.  He started the monthly artists’ program A-LAB Forum at Crossing Art Gallery, and created the monthly independent film series CINEMAROSA.  Canonge’s work has been reviewed by The New York Times, ART FORUM, Art in America, New York Daily News, Manhattan Times, Hispanic Magazine; by major networks ABC, NBC, CNN, CBS, UNIVISION, etc., and online by Art Experience NYC, Hyperallergic, Turbulence, Art Card Review, and New York Foundation for the Arts’ bulletin NYFA News.