LiVEART.US, Performance Art initiative created and organized by artist, and independent curator, Hector Canonge, begins its Spring 2018 season program with the special presentation of the program “Performing Time,” featuring the work of Butoh artists from France, Brazil, Mexico, Japan, and the United States.

Under the theme “Performing Time,” this month’s program focuses on various manifestations of Butoh as a time based, performative dance movement, and experiential practice. Guest artists will present selected new works based on the notions of temporality, ephemerality, and/or cultural referencing that Butoh brings to contemporary dance and performative aesthetics. 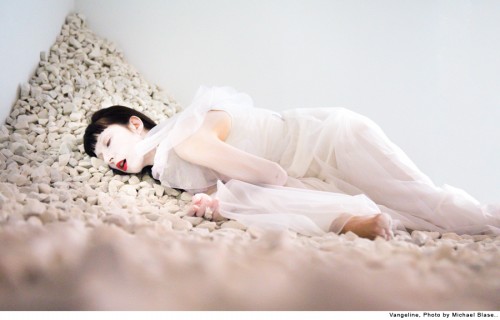 VANGELINE is a teacher, dancer, and choreographer specializing in the Japanese postwar avant-garde movement form Butoh. She is the Artistic Director of the Vangeline Theater (New York), a dance company firmly rooted in the tradition of Japanese Butoh while carrying it into the 21st century, and the founder of the New York Butoh Institute. Vangeline’s work has been heralded in publications such as the New York Times (“captivating”), Los Angeles Times, (“moves with the clockwork deliberation of a practiced Japanese Butoh artist”) and LA Weekly to name a few. Time OUT Chicago named Vangeline’s, “one of the best Dance Visits of 2011.” More recently her BUTOH BEEETHOVEN: Eclipse received critical acclaim in New York and was dubbed: ‘incredibly moving and powerful. It is clear that Vangeline is an artist who knows the darkness of Butoh well, and has the incredible skill to make that darkness dance…Vangeline has the control and poise of a true master of Butoh.”  With her all-female dance company, Vangeline’s socially conscious performances tie together Butoh and activism. Her performances have dealt with subjects as varied as feminism, climate change, war and perceptions of gender. Vangeline was the recipient of a six-month artist residency at PS122 Performance Space (“New, New Stuff”); since 2006 she has received 28 prestigious awards from Puffin Foundation, Japan Foundation, New York Department of Cultural Affairs, New York Foundation for the Arts, New York Council on the Arts, Asian American Arts Alliance, Brooklyn Arts Council, and the Robert Friedman Foundation.

* VANGELINE will perform “Fireflies” with music by Ray Sweeten. 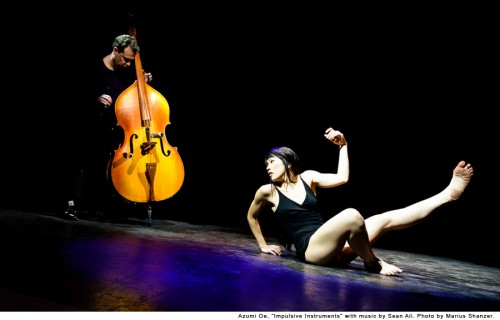 AZUMI OE was born and raised in Kyoto, Japan. Since her arrival to New York City, she has worked as principal dancer of New York-based Butoh company Vangeline Theatre in many festivals and events in the US for over 8 years. She joined as an assistant choreographer and main dancer for Katsura Kan’s several tours in US, Central America, China, Russia and Europe. Her own solo work was presented in New York, Boulder, Beijing, Moscow, St. Petersburg, Helsinki, San Miguel de Allende, Puebla (Mexico), Stuttgart (Germany). She has also worked as a dancer, choreographer, and project assistant for Video Sculpture artist Katja Loher, and for visual-performance artist, Ayakamay, Marck for his video art and live performances duo project with Bassist Sean Ali. AZUMI is constantly at work on a wide range of collaborative, solo and experimental dance projects.

* AZUME will perform “Impulsive Instruments,” a piece that explores the weight of space between noise and a primitive pre-communication body, with live music by composer Sean Ali. 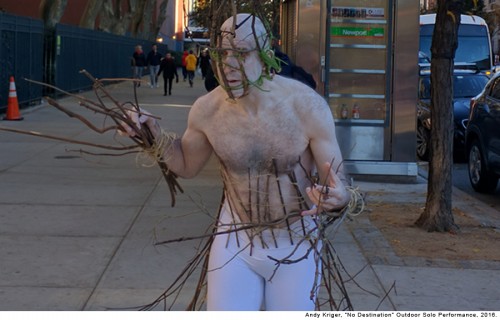 ANDY KRIGER is a student of movement. He studies Butoh with Vangeline and also with other teachers, including Eiko Otake, Mari Osanai, and Yumiko Yoshioka. He has performed in: ‘No Destination’, a solo street work exploring our connection between the natural history of a place and the urbanization of place over time; Vangeline’s group memorial performance for September 11th; and the contemporary dance piece ‘Bone Chorus’ with Lokasparsa Dance Projects, choregraphed by Clyde Forth. Kriger is also a student of Chinese internal arts and bodywork with Tom Bisio; he teaches both ba gua zhang and xing yi quan.

* ANDY’s performance, “i do not need what i think i need” explores separation and love based on a quote from the Upajjhatthana Sutta, “I must be separated and parted from all that is dear and beloved to me.” 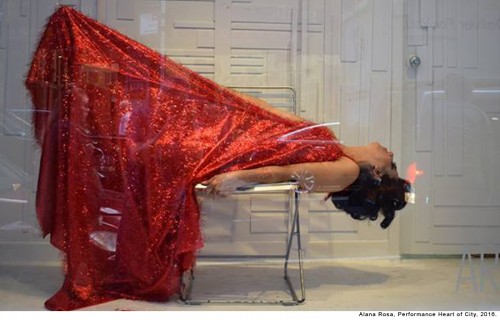 ALANA ROSA is the creator of the Brazilian Theater Group Zastras. Rosa has been acting and performing since 1990 in her native Brazil and abroad. She received The best Actress of the Brazilian Press Award 2015, and she currentlyl lives in New York City where she participates in Butoh workshops as a student of Vangeline Theater. She has presented her performances in art galleries and site-specific work at Projects at Garment Distric NYC. In 2016 she participated in the event Butoh Offering in Time Square lead Vangeline Theater. She has collaborated in works such as Beyond Fashion by Antonio Oliveira, and performed the pieces, “Dancing with the Flowers,” 2014, “Dance of Words,” 2014, “Scream,” inspired by Edward Munch painting, 2015, “Heart of the City,” 2016, “Pandora Box” on Broadway Street Festival (Garment District) 2016, and “Own Dance With Colors,” 2017.

*  ALANA will perform “Between Madness and Lucidity,” a work that expresses the daily comings and goings of the city, a dance of love and restlessness with the day-to-day scenery. Sound effects and music by Junia Flavia d’Affonseca. 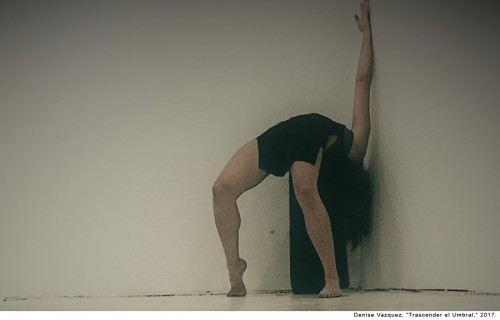 DENISE VAZQUEZ is founder of the Collective Té para tr3s. She is an actress, Butoh artist, and teacher dedicated to investigate the scene through movement and its resonance out of the stage. Her work incorporates the use of physical techniques, multimedia technologies, scenic installation and performance to build a discourse and explore topics related with the human condition, environment, and society. As a multidisciplinary artist she collaborates with local artists to blend cultures and generate alternative ways to communicate. She has performed in a variety of national and international shows including Hibrido (Teatro de la Danza, Mexico City, 2013) choreographed by Yumiko Yoshioka and Miguel Camarero, and Pies de plomo, pies de viento (Nexus, Mexico, 2015), a solo piece co-directed with Irma Olmedo. Other credits include El juicio final (2009) Teatro Náhuatl del S.XVI; Las Meninas (2009) awarded best actress, best play, best direction; Valentina y la sombra del diablo (2010) winner of PECDAP 2010; Mujeres al rojo vivo (2010) awarded best play at Héctor Azar Theater Festival; and Subversivo (2012) winner of PECDAP 2012. Vazques holds a B.A. in Performing Arts from the Benemérita Universidad Autónoma del Estado de Puebla.

* DENISE will present “Trascender el umbral” (Transcend the threshold) a work that questions individual existence, and calls for human awareness to find happiness and peace. 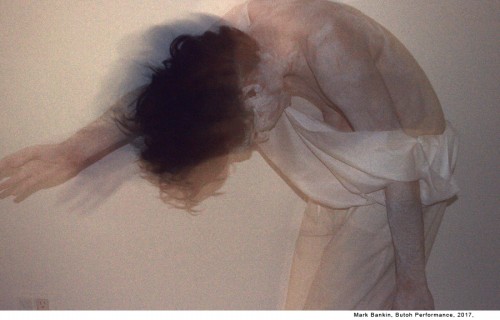 MARK BANKIN is a dancer/choreographer based in NY whose work circulates around themes of mourning, memory crypts, and misperception. Mark studied the Jooss-Leeder technique with Pina Bausch’s company at the Folkwang school in Germany, Feldenkrais with Rebecca Davis, and dance with artists who participated in the Butoh lineage such as Tadashi Endo, Tetsuro Fukuhara, Maureen Flemming, Eiko Otake, and Vangeline. Mark is currently an MA candidate at the European Graduate School studying Art, Philosophy, and Social Thought, and teaches trauma informed yoga in Brooklyn.

LiVEART.US is platform established to support and feature works by local, national, and international artists working in Performance Art and its diverse manifestations. Created and organized by interdisciplinary artist, Hector Canonge, LiVEART.US features works where the body, as main instrument for artistic creation and expression, is the catalyst for sensorial experiences, cultural interpretation, and critical reflection. The program’s main objective is to further support the creation and presentation of new works in Live Action Art in an environment suitable for reflection and dialogue. LiVEART.US follows and complements the monthly program TALKaCTIVE initiated by Canonge in September 2015. Since its inception in 2016, the program has presented the work of artists from diverse cultural backgrounds, ages, gender, and national origin creating a dynamic structure and an international network for the exploration, experimentation and execution of Live Art practices.

About the Organizer
HECTOR CANONGE (Founder and director of LiVEART.US) is an interdisciplinary artist, independent curator, and cultural entrepreneur based in New York City. His work incorporates the use of new media technologies, cinematic narratives, Live Action Art, and Social Practice to explore and treat issues related to constructions of identity, gender roles, and the politics of migration. Challenging the white box settings of a gallery or a museum, or intervening directly in public spaces, his performances mediate movement, endurance, and ritualistic processes. Some of his actions and carefully choreographed performances involve collaborating with other artists and interacting with audiences. His installations, interactive platforms, and performance art work have been exhibited and presented in the United States, Latin America, Europe and Asia. As cultural entrepreneur, Canonge created and runs the annual Performance Art Festival, ITINERANT, started ARTerial Performance Lab (APLAB), an transcontinental initiative to foster collaboration among performance artists from the Americas, and directs his independent programs: PERFORMEANDO, a program that focuses on featuring Hispanic performance artists living in the United States and Europe, PERFORMAXIS, an international residency program in collaboration with galleries and art spaces in Latin America. After living most of his life in the United States, Canonge returned to South America in 2012, and lived abroad for almost 3 years. The artist returned to New York City in late 2015 to continue with the development and execution of new projects, exhibitions, and initiatives among them: TALKaCTIVE, LiVEART.US, and CONVIVIR the international residency program at MODULO 715. In 2017, Canonge organized the performance art platform, NEXUS, premiered during Miami Art Basel, and worked in the development of the first International Performance Art Festival of Santa Cruz de la Sierra, presented in January 2018 in Bolivia. The artist is currently at work in his new multidisciplinary project, “OPERATIVOS SOMATICOS (Somatic Operatives)” supported by the CIT Foundation to be presented in Canada and Europe during Summer 2018.