This month’s artists have been invited to participate in the program with new works that explore corporeal boundaries in their relation with circumscribed familiar and remote geographies. 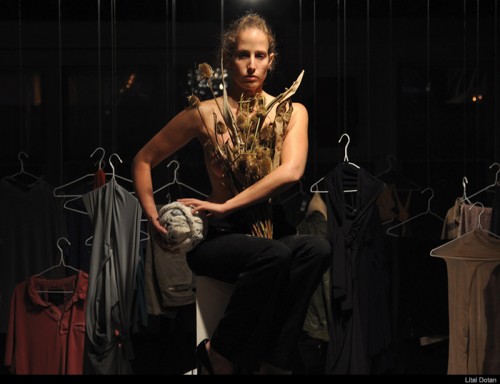 Lital Dotan is an immersive artist working with performance, video and installation art. She dedicated most of the past decade to creating sustainable environments for performance practice. She is the co-founder and artistic director of Glasshouse ArtLifeLab, an art-house currently based in Brooklyn, NY. Co-founded with Eyal Perry in 2007, Glasshouse is a platform dedicated to performance in the domestic sphere, nourishing artists and audiences across generations and disciplines. In 2015 Dotan founded Que sal mah, a bespoke dressmaking studio that merges performance art, choreography and fashion design, where clients book a one-to-one performance session culminating in a dress. Since early in her artistic career, she has collaborated with photographer Eyal Perry who is responsible for the photography in the majority of her work. An integration of installation, documentation and life her performance narratives are designed to challenge structures and mechanisms across art and society; dissolving and re-imagining through harsh intimacy notions of space, audience, art, value and success. 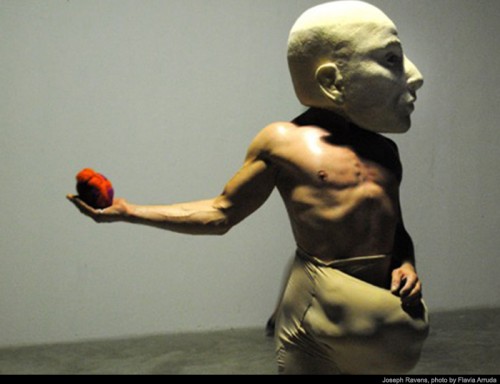 Joseph Ravens is founder and Director of Defibrillator Gallery, a non-profit arts organization with a focus on Performance Art. As an artist, Ravens has presented his work throughout Asia, Europe, South America, and the US. He studied at the Gerrit Rietveld Academie in Amsterdam, Netherlands, and is a graduate of The School of the Art Institute of Chicago with a Masters of Fine Art in Performance. Ravens is a recipient of the Illinois Arts Council Fellowship for Performance Art, as well as the Fellowship for New Performance Forms, and many other grants and awards that have allowed him to build an international reputation. Ravens was included in LIVE Biennale Vancouver (2015), 20th Bienal Internacional de Curitiba (Brazil 2013), Venice International Performance Art Week (2012), and Intrude: Art and Life 366 at Zendai MoMA, Shanghai, China (2008). Co-founder and Director of the annual Rapid Pulse International Performance Art Festival, Ravens is recognized and respected for his work as an artist, an educator, and a curator. 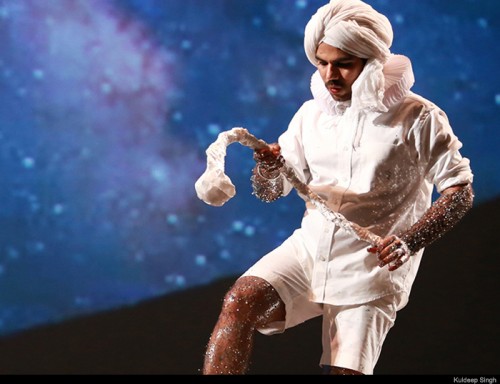 Kuldeep Singh is an object maker, performer, and painter, whose trans-disciplinary artistic practice focuses on the idea of storytelling and narratives beyond political boundaries. Originally hailing from New Delhi, he is currently based in New York. His practice is primarily informed by Indian Aesthetics of Hindu era of first millennium AD. The open attitude towards gender, lifestyle and expression are the core components of this period that he deeply admires. Triggering a deep relation between the sensual and the spiritual, his projects act as romantic laboratories investigating kinship to performance, moving image and installation. As an intensively trained Indian classical dancer of Odissi repertoire, he holds a profound understanding of sound, space and movement. And reinvents myths with components in acting, sound and image making through this vast system. Singh is thoughtfully interested in food and explores cooking as a metaphoric process equated to his metamorphic artistic process. Juggling between the kitchen and studio, his artistic process finds a permutable exchange between the forms, spurring an alchemical outcome to his projects. 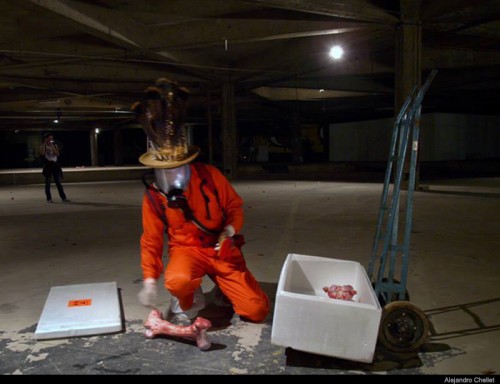 Alejandro Chellet is a multidisciplinary artist working with the misplaced core principles of coexistence that result in the loss of connection with Nature cycles that we live on the political and environmental context of urban societies. His performance practice incorporates the audience, public space, architecture and mainly focuses on raising awareness that the bodies we all inhabit belong to Gaia, a broader organism, a planetary ecosystem that makes it possible for us to have a body made of earth, living minerals and powered by sunlight. In addition to body art he is a social practitioner who develops in the cultural and permacultural networks, interacting with individuals and collectives in alternative communities like squats, ecologists, artists hubs, activists, gallerists, cultural entrepreneurs and shamans. Currently his work is shown in the Americas and Europe, particularly developing exhibitions, performances and urban interventions projects in cities like New York, London, Sao Paulo and, Mexico City. 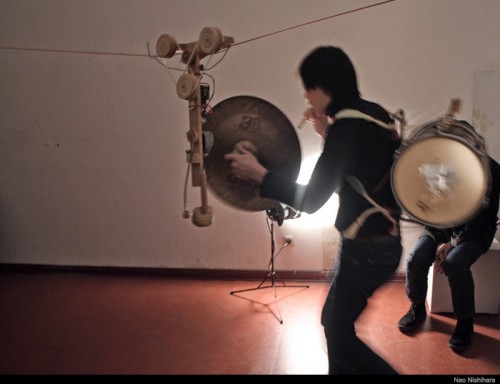 Nao Nishihara is a sound artist taking the both style of exhibition and performance. Using sound, he tries to reveal the in-born abilities of the ears of us. Using objects, he tries to re-find our body, by provoking the movement of the body and showing the inevitable difficulty of the body. His works also include Kyogen (Japanese traditional farce), field recordings, study/ documentation of foghorns and instrument production. He translated the book Sound Art (by Alan Licht, Film Art Inc., 2010) along with Kazue Kobata and Hiroshi Egaitsu, and the book A Brief History of Music (by H.U. Obrist, Film Art Inc., 2015) along with Fumiko Uchiyama and others. He was born in Hiroshima in 1976. In 1998, he left Tokyo University of Foreign Studies (Czech Language) before graduating. In 2009, he graduated from Tokyo University of the Arts, with a degree in Musical Creativity and the Environment. In 2011, he obtained a master’s degree in Intermedia Art from Tokyo University of the Arts. Nishihara is staying NY as the grantee of Asian Cultural Council and Omomuki Foundation, from December 2015 to June 2016. He performed at several places in NY including Experimental Intermedia in December 2015. 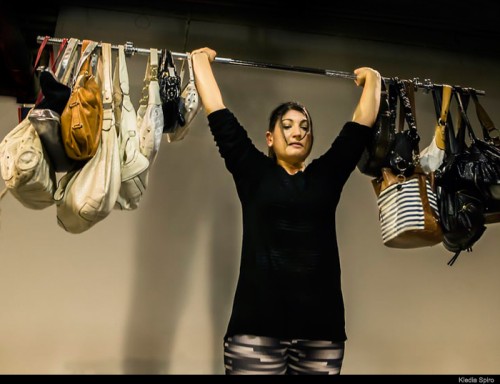 Kledia Spiro creates videos, performances, installations, and paintings. She was born in Albania and is part of an Olympic weightlifting team. She uses weightlifting as a symbol of survival, empowerment and celebration. Weightlifting becomes a vehicle for discussing women’s role in society, immigration and times of war. Her work explores the connection between weightlifting, folk dance and daily life as a new celebratory ritual for understanding the relationship between the artist and her parents, as well as the present and the past. By experimenting with indeterminate methods, Spiro wants the viewer to access the otherwise inaccessible spaces. Her works are based on Freudian and Piagetian behavioral concepts: visions that reflect psycho-analysis, behavioral psychology, and a sensation of indisputability, combined with details of odd, eccentric, absurd, totemic and humoristic elements. By questioning where one is and the concept of movement, Spiro investigate the manipulation of lifting objects overhead and it’s effects. Spiro has performed nationally and internationally at various venues. 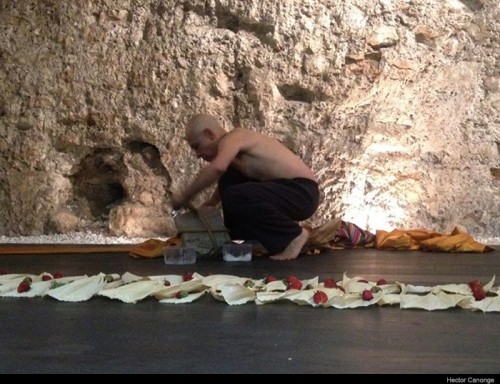 Hector Canonge is an interdisciplinary artist, curator, media educator and cultural entrepreneur based in New York City. His work incorporates the use of new media technologies, cinematic narratives, Live Action Art, and Social Practice to explore and treat issues related to constructions of identity, gender roles, psychogeography, and the politics of migration. He has exhibited and presented broadly in the United States, Latin America, Europe and Asia. As cultural entrepreneur, Canonge created and runs the Annual Performance Art Festival NYC, ITINERANT, started ARTerial Performance Lab (APLAB), an transcontinental initiative to foster collaboration among performance artists from the Americas, and directs his independent programs: PERFORMEANDO, a program that focuses on featuring Hispanic performance artists living in the United States and Europe, NEXUSURNEXUS a virtual platform for Live Action Art, and PERFORMAXIS, an international residency program in collaboration with galleries and art spaces in Latin America. After living most of his life in the United States, Canonge returned to South America in 2012, and lived abroad for almost 3 years. The artist returned to New York City in late 2015 to continue with the development and execution of new projects, exhibitions, and initiatives such as ITINERANT, Performance Art Festival NYC, taking place in the 5 boroughs in the city. He also launched TALKaCTIVE: Performance Art Conversation Series, CONVIVIR, the international residency program at MODULO 715, his new space in Jackson Heights, Queens. In 2016, Canonge initiated the Performance Art program LiVEART.US hosted at the Queens Museum, started teaching Performance and Media Arts at City University of New York, and continue with his program PERFORMEANDO, the performance art program that focuses on featuring works by latino/a artists in the USA. Canonge is currently working in his new project “A Home of Our Own” as resident artist for Residency Unlimited.