LiVEART.US, Performance Art initiative created and organized by artist, and independent curator, Hector Canonge, continues its Spring 2018 season with the presentation of the program “Performing Accumulations”,  featuring the work of three artists whose approach to Live Art explore notions of the (re)purposed and (re)significance in / of every day’s experiences.

* After the live performances, there will be a Q&A session with the artists, curator, and attending audiences. 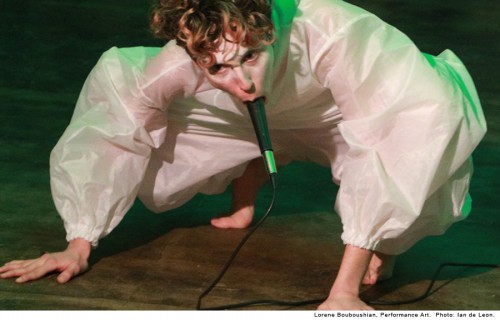 LORENE BOUBOUSHIAN works between performance art, dance, and music to produce “thought-provoking commentary on social limits” [Minneapolis Star Tribune]. She has shared her work in galleries and theaters in Seattle, Madison, Athens, Beirut, and Zagreb, performing in festivals including New Genre (Tulsa), QueerNY and Queer Zagreb, Inverse Performance Art Festival, and Month of Performance Art-Berlin. She has shared her interdisciplinary teaching practice at universities in Kentucky, Beirut, and Mexico. She has collaborated with Kaia Gilje, Lindsey Drury, Matthew Gantt, Valerie Kuehne, and Panoply Performance Lab, and performed for Melinda Ring, luciana achugar, Daria Fain, and Kathy Westwater. She is a current Movement Research Artist-in-Residence. Lorene will perform The Land is a Pain Body, a work of rigorous somatic and voice practice that goes beyond the expedience of naming the “body as archive,” to work of archaeology. The work attempts to destabilize exhumation of both, the artist’s control and the audience’s power, trauma and class status to provoke the question of presence –why and how are we in the same art space together. 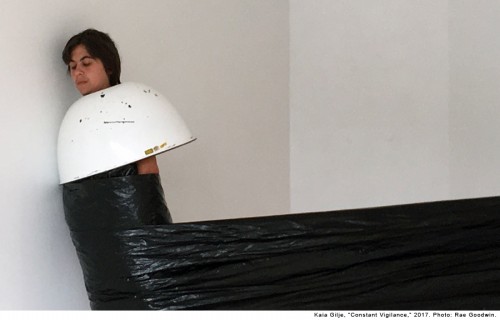 KAIA GILJE comes from a movement practice focusing on task and action based performance. Her solo works, and collaboration projects have been presented at various local, national and international venues including Panoply Performance Lab, Inverse Performance Art Festival, and Movement Research at the Judson among others. Kaia will perform a new work the Untitled piece, an experiment in different ways of considering reciprocity and/or lack of cooperation, where arrays of tasks and manipulations attempt to act as sieves for arrays of body and facial expressions which, in turn, attempt to act as sieves for arrays of material tasks and more manipulations. 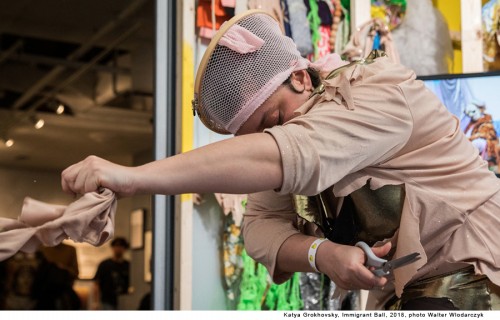 About the program:
LiVEART.US is platform established to support and feature works by local, national, and international artists working in Performance Art and its diverse manifestations. Created and organized by interdisciplinary artist, Hector Canonge, LiVEART.US features works where the body, as main instrument for artistic creation and expression, is the catalyst for sensorial experiences, cultural interpretation, and critical reflection. The program’s main objective is to further support the creation and presentation of new works in Live Action Art in an environment suitable for reflection and dialogue. LiVEART.US follows and complements the monthly program TALKaCTIVE initiated by Canonge in September 2015. Since its inception in 2016, the program has presented the work of artists from diverse cultural backgrounds, ages, gender, and national origin creating a dynamic structure and an international network for the exploration, experimentation and execution of Live Art practices.

About the organizer:
HECTOR CANONGE (Founder and director of LiVEART.US) is an interdisciplinary artist, independent curator, and cultural entrepreneur based in New York City. His work incorporates the use of new media technologies, cinematic narratives, Live Action Art, and Social Practice to explore and treat issues related to constructions of identity, gender roles, and the politics of migration. Challenging the white box settings of a gallery or a museum, or intervening directly in public spaces, his performances mediate movement, endurance, and ritualistic processes. Some of his actions and carefully choreographed performances involve collaborating with other artists and interacting with audiences. His installations, interactive platforms, and performance art work have been exhibited and presented in the United States, Latin America, Europe and Asia. As cultural entrepreneur, Canonge created and runs the annual Performance Art Festival, ITINERANT, started ARTerial Performance Lab (APLAB), an transcontinental initiative to foster collaboration among performance artists from the Americas, and directs his independent programs: PERFORMEANDO, a program that focuses on featuring Hispanic performance artists living in the United States and Europe, PERFORMAXIS, an international residency program in collaboration with galleries and art spaces in Latin America. After living most of his life in the United States, Canonge returned to South America in 2012, and lived abroad for almost 3 years. The artist returned to New York City in late 2015 to continue with the development and execution of new projects, exhibitions, and initiatives among them: TALKaCTIVE, LiVEART.US, and CONVIVIR the international residency program at MODULO 715. In 2017, Canonge organized the performance art platform, NEXUS, premiered during Miami Art Basel, and worked in the development of the first International Performance Art Festival of Santa Cruz de la Sierra, presented in January 2018 in Bolivia. The artist is currently at work in an upcoming project commissioned by EC Arts to be debuted in Europe in Summer 2018.