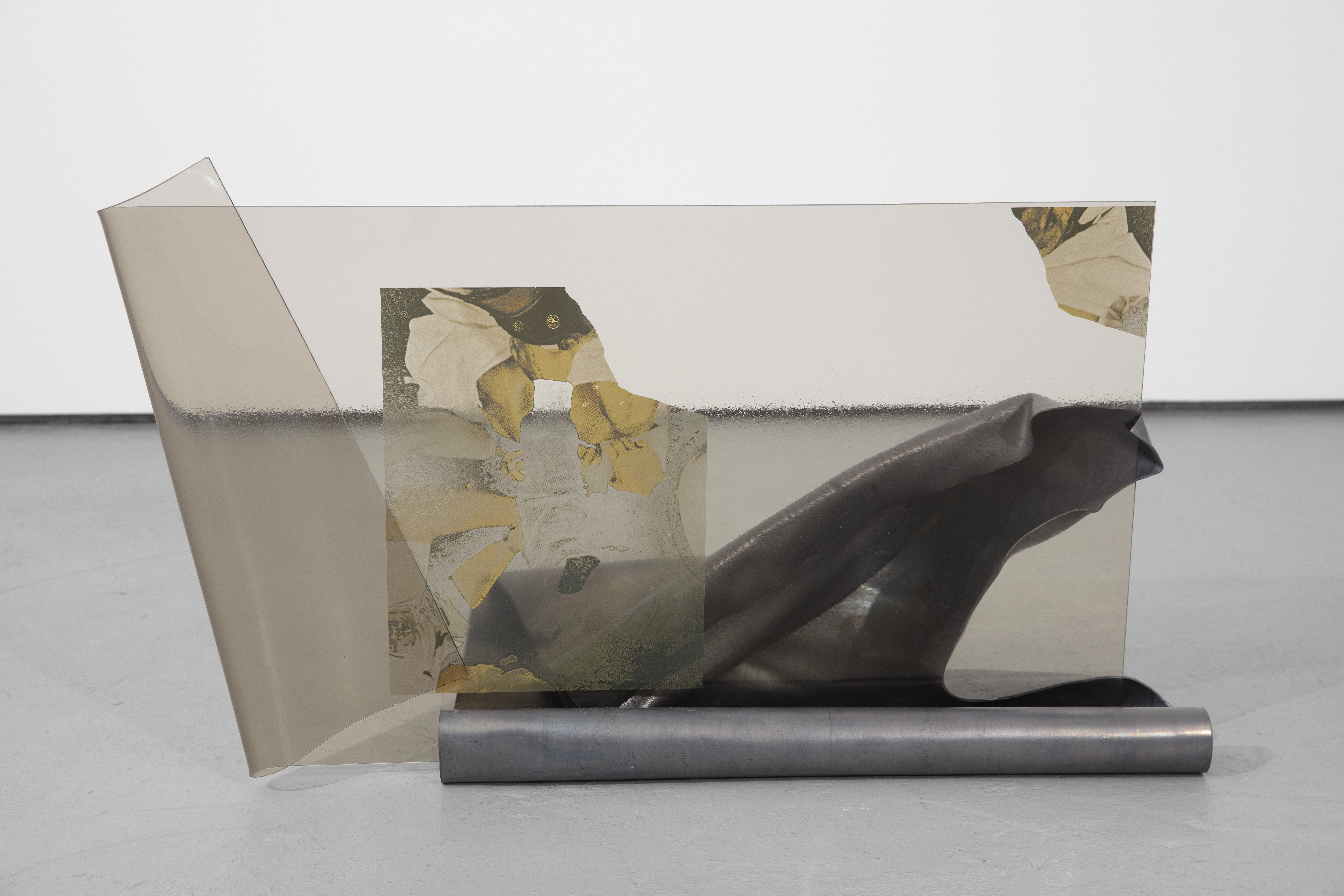 Charisse Pearlina Weston:
of [a] tomorrow: lighter than air, stronger than whiskey, cheaper than dust

of [a] tomorrow: lighter than air, stronger than whiskey, cheaper than dust is Charisse Pearlina Weston’s first solo museum presentation. The artist’s practice considers and mines Black tactics of refusal which sustain Black life in the face of persistent anti-Black violence. Through the use of various techniques of withholding, repetition, and enfoldment intermingled with poetic, historical, and autobiographical interventions, Weston’s ambitious new work reimagines and posits Black interior life as a central site of Black resistance. For this exhibition, Weston continues her artistic investigation into the material and symbolic uses of glass within architecture, media, and surveillance which reinscribe anti-Black violence. The works utilize glass, canvas, concrete, lead, text, and photographs pulled from various sources and archives, including the Queens Museum’s permanent collection.

The complex spatial and socio-political histories of the site upon which the Museum and Flushing Meadows Corona Park are situated act as the conceptual framework of the exhibition:

On April 4, 1964, the Brooklyn and Bronx branches of the Congress of Racial Equality (CORE), led by Brooklyn chairman Isaiah Brunson, announced their intent to stall hundreds of cars along the access roads and highways leading to the much anticipated 1964-1965 New York World’s Fair, located on the grounds of what is now the Museum and Corona Park. This proposed gesture of resistance, meant to represent the ways in which white supremacy prohibits Black life, was met with immediate, widespread backlash from media outlets, government officials, and other civil rights activists. Then NYC Mayor Robert F. Wagner Jr. declared the activists had placed “a gun to the heart of the city.” Although the stall-in never took place as conceived, CORE was successful in disrupting, even if only temporarily, the Fair and the city’s psychological landscape: the tens of thousands of would-be fairgoers who had come “to the world of fantasy” were instead made to “[encounter] the world of fact.” (NYC Police Commissioner Murphy quoted in Tomorrow-Land: The 1964-65 World’s Fair and the Transformation of America by Joseph Tirella)

Spanning two galleries, this exhibition brings together works which represent Weston’s attempts to critically animate the radical possibilities encapsulated by CORE’s threat to stall, to pause, to withhold passage through. Through varied acts of withholding and refusal, the exhibition also considers how such interpositions might reconfigure intimacy and the interior within the context of social unrest. In the show’s first gallery, Weston stages a large-scale spatial intervention comprised of suspended glass panels. The installation, from which the exhibition derives its name, blocks passage from one gallery to the next as a means by which to consider how architecture functions as a spatial and social modifier upon which fantasies of the future, as well as freedom and intimacy, are enacted. Displayed in relation to the installation is a photographic diptych on canvas, etched with glass. The diptych distorts and interlayers autobiographical source material with a map of a counterprotest to the stall-in staged by CORE’s national chairman.

The exhibition’s second gallery includes a series of sculptural works that consider archives of Black resistance and protest across time. Using delicately balanced and transparent media alongside architectural supports, the works create physical acts of reorientation, inversion, and obstruction in response to the ways in which media and public discourse shape perceptions of Black identity and civic protest. Through haptic materiality and abstraction in both language and form, Weston continues her examination of dynamic interplay of architecture, intimacy, and (spatial) violence.

Charisse Pearlina Weston: of [a] tomorrow: lighter than air, stronger than whiskey, cheaper than dust is organized by Lindsey Berfond, Assistant Curator and Studio Program Manager.

Charisse Pearlina Weston (b. 1988, Houston, TX) is a conceptual artist and writer whose practice is grounded in a deep material investigation of poetics and the autobiographical to explore the delicate intimacies and reticent poetics underlying black life. She received a BA from the University of North Texas, a MSc in Modern Art: History, Curating and Criticism from the University of Edinburgh’s Edinburgh College of Art and a MFA in Studio Art, with Critical Theory emphasis, from the University of California-Irvine in 2019. She is an alumna of Whitney Museum of American Art’s Independent Study Program. She has exhibited in solo and group exhibitions including Contemporary Art Museum, Houston, the Hessel Museum of Art at Bard College, Abrons Art Center, Project Row Houses, Recess, and the Moody Center of the Arts at Rice University. She has received support from the Artadia Fund for the Arts (2015, Houston), the Dallas Museum of Art’s Arch and Anne Giles Kimbrough Fund (2014), the Harpo Foundation (2021) and the Graham Foundation (2021), among others. She was a 2019 Dedalus Foundation Fellow in Painting and Sculpture and is the recipient of the Museum of Art and Design (MAD)’s 2021 Burke Prize, where she was also a 2021 MAD Artist Fellow. She will be a Fields of the Future Fellow at Bard Graduate School in Fall 2022. Her experimental play, Awaiting, will be published by Ugly Duckling Press in December 2022.

Charisse Pearlina Weston: of [a] tomorrow: lighter than air, stronger than whiskey, cheaper than dust is presented with support from Crystal Windows and Door Systems, the Graham Foundation, the Dedalus Foundation, and the Art Alliance for Contemporary Glass. Additional in-kind support is provided by UrbanGlass.