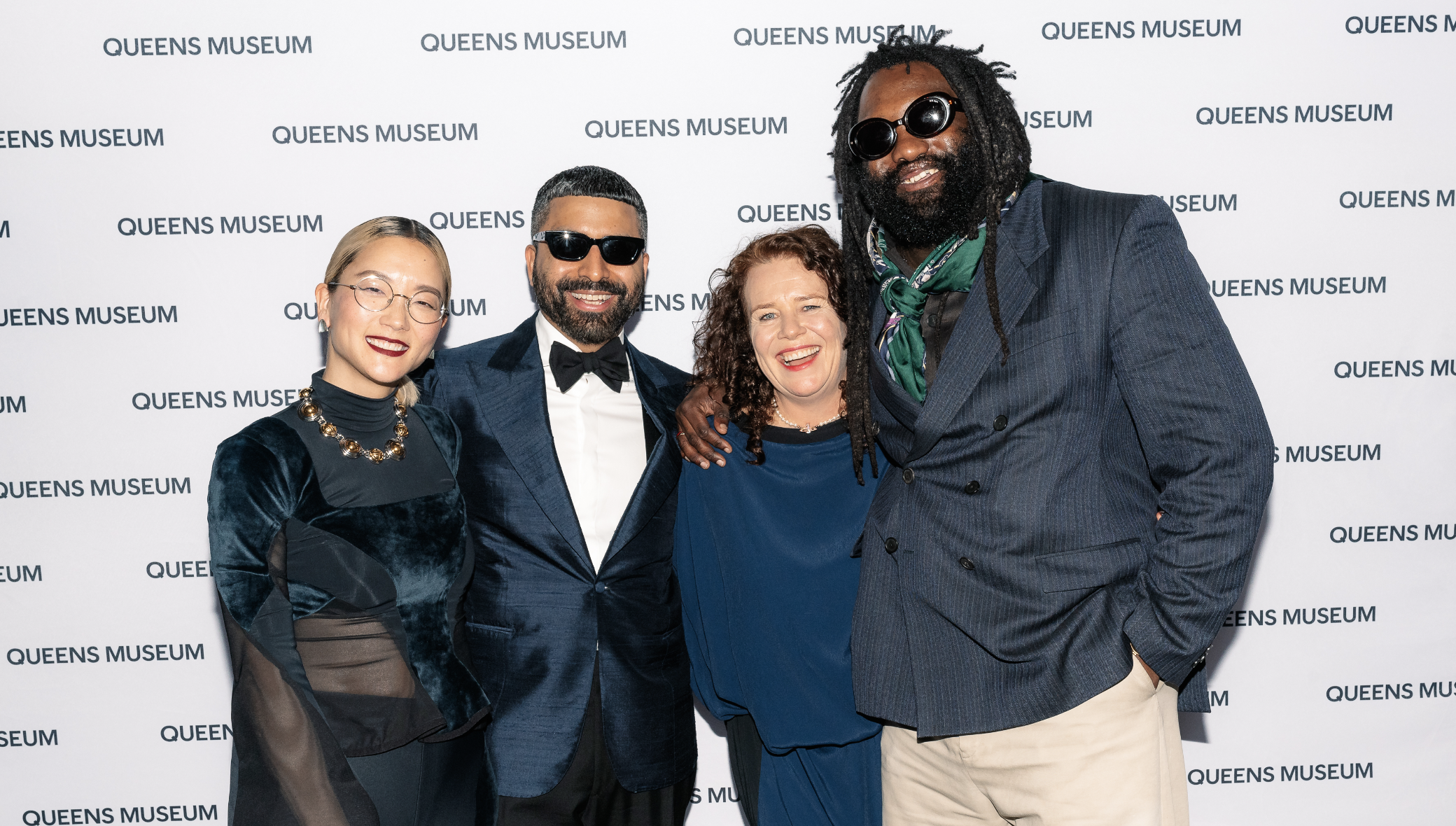 The Queens Museum’s annual gala was held yesterday, May 12. Marking the Museum’s 50th anniversary, the evening brought together artists, fashion designers, musicians, curators, and civic leaders to celebrate the Museum’s vision of uplifting the diversity and creativity of Queens, cultivating local artistic talents, and supporting the tastemakers of tomorrow.

This year’s Honorees included artist Christine Sun Kim and Queens’ own Tremaine Emory, designer, Creative Director of Supreme, and founder of the label Denim Tears. Kim’s large-scale mural Time Owes Me Rest Again is currently on view at the Museum on the monumental wall encasing the Panorama of the City of New York.

The evening began with a cocktail party featuring music curated by DJ DZA and drinks and small bites provided by Queens Night Market vendors. Strolling through the galleries, attendees enjoyed tours of exhibitions Suzanne Lacy: The Medium is Not the Only Message and Stephanie Dinkins: On Love and Data. The night’s emcee, artist and musician Ian Isiah, then welcomed guests to the central atrium for a seated dinner presented by Abigail Kirsch.

Queens Museum President and Executive Director Sally Tallant welcomed guests to the momentous anniversary celebration. She announced $1.5 million in new funding for the upcoming children’s museum including major gifts from the Suna Family Foundation and from Board Chair Peter Warwick and Helen Warwick. This new phase of capital work to create the connected Museum, an “intergenerational multilingual family learning center rooted in art and culture,” has also received $4 million in recent funding from NYC Department of Cultural Affairs and the Borough President Donovan Richards. During dinner, former Commissioner of the New York City Department of Cultural Affairs, Tom Finkelpearl, introduced Honoree Christine Sun Kim while former Brand Director of Supreme and founder of the fashion label Awake NY, Queens-born Angelo Baque, a Queens Museum Board member, presented Honoree and long-time friend Tremaine Emory to the audience. This year’s honorees speak to the Museum’s mission to foster creative collaboration across cultural experiences and artistic forms.

The Honorees’ speeches were punctuated with lively entertainment that painted a picture of the richness and diversity of the borough and New York City at large, first, with an ASL Slam hosted by Zavier Sabio with a powerful rhapsody in American Sign Language by Monie Gwaltney, followed by a live musical performance by the Immanuel Wilkins Quartet that filled the atrium with the sounds of contemporary jazz.

Kimaada Le Gendre, Director of Education, announced the creation of the Queens Teens Institute for Arts and Social Justice, that will further cement the Museum’s dedication to nurturing the youngest talent in the City, through integral programming that builds on the Museum’s celebrated Queens Teens initiative. Tallant then led a Paddle Raise for the Museum’s impactful programming:

– Exhibitions and Programs – presenting and supporting the highest quality art and artists.

– Access for All – removing barriers to participation through free admission, translation, and accessible spaces.

The outpouring of support for the Museum’s core programs invigorates the ongoing commitment to being one of the most inviting and accessible museums to view the art of our times.

Festivities followed with an after-party celebration hosted by Tremaine Emory and Christine Sun Kim and sponsored by EBBS Brewing Company. Guests mingled and danced to a DJ set by Nina Sky and A.T.M.