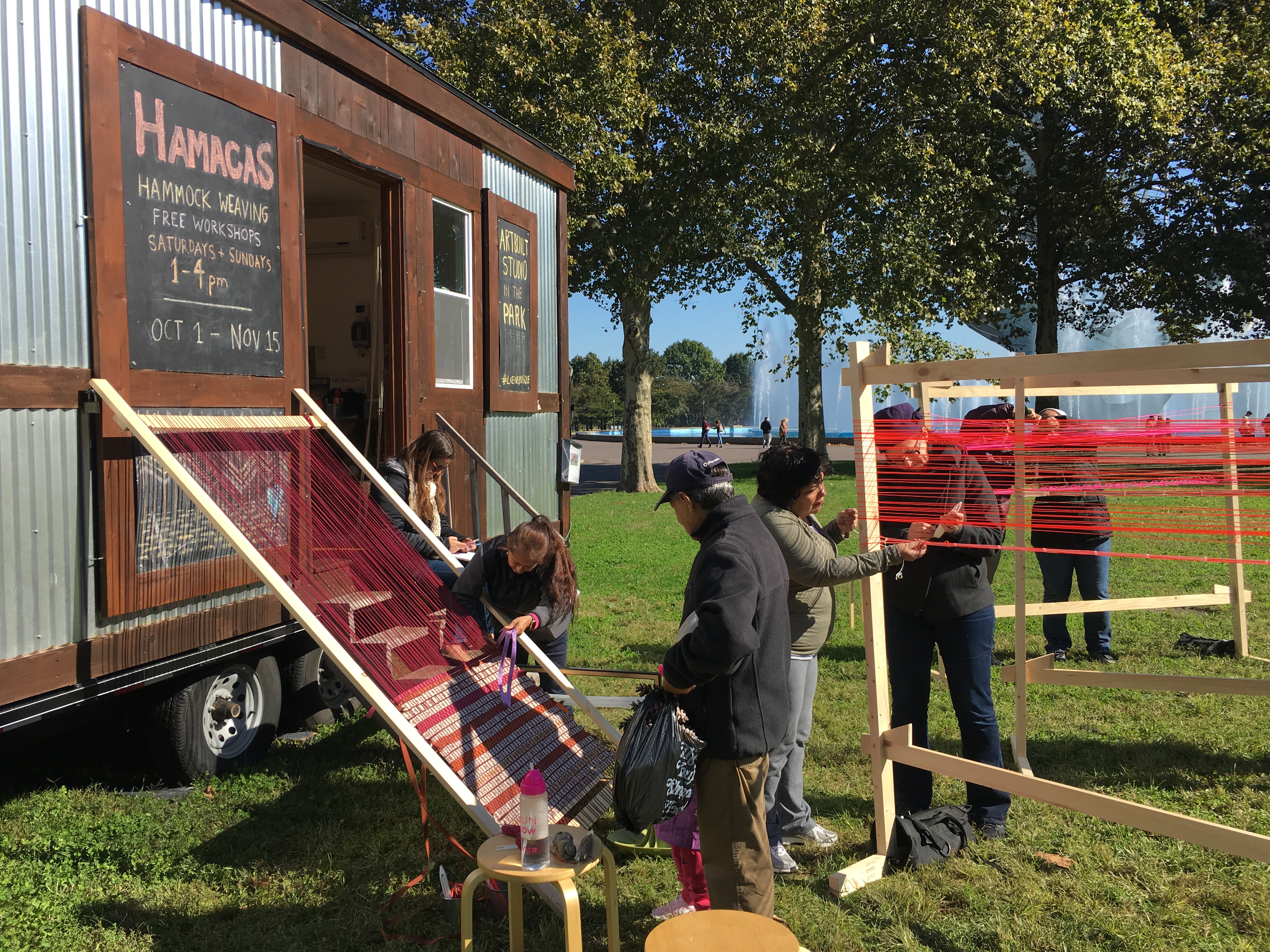 ArtBuilt Studio in the Park is a six-week residency program that provides an artist or artist collective use of a 150-square-foot mobile studio space in a public park for a community-engaged art project. Operating out of Flushing Meadows Corona Park since its inception in 2015, ArtBuilt Studio in the Park is expanding to all five boroughs of New York City in 2018 and 2019 with the support of the Our Town grant from the National Endowment for the Arts (NEA).

For this year’s Queens iteration of the program from Oct.1 to Nov.15, we welcomed artist in residence Liene Bosquê and her project HamacaS with a first public event on Oct. 7th. In collaboration with Queens Museum’s community organizer Monica Carrillo, the local crochet and embroidery group Bordeando visited the ArtBuilt Studio in the Park, celebrating the completion of their summer programs and welcoming the studio trailer to the community. Working with textile and folk arts has been of growing interest within this community, bridging moments for gathering with skill building and a place to share knowledge and stories around heritage. Several of the Bordeando members shared stories of their parents or grandparents having worked as hammock weavers in their home countries. The thought of relaxing in a hammock stirs deep associations of home. The group was invited to join a series of weekday workshops designated for those with interest in focusing on a Mayan weaving technique and in continuing to work in a community setting.

Every Wednesday and Friday morning, from 10am – 12noon this group has been meeting. They are working towards the completion of three hammocks in the Mayan weaving technique, which is composed of a series of carefully measured knotted borders and a loose inner weave. The results of their labor will be revealed on the weekend of Nov.10-11.

On Saturdays and Sundays HamacaS has been opening the ArtBuilt Studio in the Park for public drop in workshops that have been very popular with families and kids. The act of weaving is accessible to everyone and the installation of looms and hammocks is growing and expanding around the studio trailer. It has been an immense pleasure to watch the production of a collectively elaborated public work. Several families and individuals have become regulars, returning every week to continue their participation in the hammock weaving workshops. To anyone passing by, there is always the opportunity to lay back in one of the hammocks and take a break.

In alignment with events at the Queens Museum, including Indigenous People’s Day Celebration and an event on taking climate action, Liene hosted two special workshops: hammock making with natural fibers, which resulted in the first finished hammock, as well as a special workshop weaving with reused plastic bags to address the plastic waste crisis. As a result there are over 5 different hammock techniques currently in producing at the studio trailer.

And there are still opportunities for the public to get involved! Join us on the weekends of Nov.3 -4 and 10 – 11, and have a go at one of the many weaving techniques and uses of materials offered by this project.

We all need some HamacaS to keep the summer spirit alive as we enter the fall season. For a full schedule of dates, click here!

ArtBuilt Studio in the Park is made possible by the National Endowment for the Arts, Surdna Foundation, the New York City Department of Cultural Affairs and The New York Community Trust.