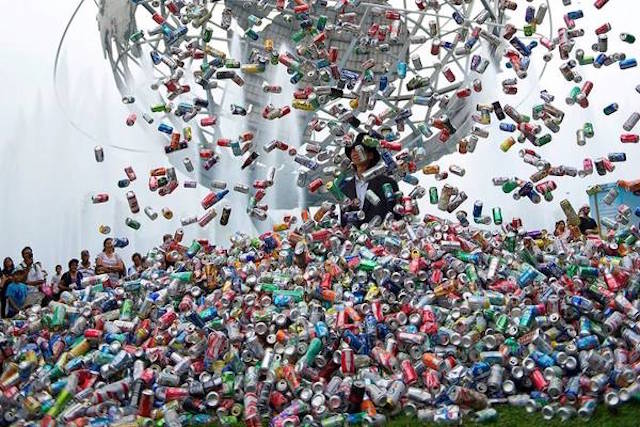 Renowned Taiwanese filmmaker Ming-Chuan Huang partners with Taiwanese American performance artist Chin Chih Yang to explore the artist’s lifelong focus on the culture of waste. FACE THE EARTH puts viewers right next to Yang as 30,000 aluminum cans are dumped on his head to call our attention to the vast amount of waste each of us creates – the average person uses and discards 30,000 cans in their lifetime! Sit alongside Chin Chih and passersby in New York City’s storied Union Square, on a giant block of ice and ponder the possibility that the polar ice cap will be gone by 2050. Watch the public participate with the artist to help him create his Giant Can Family at the Contemporary Art Museum of Taipei. Learn how he makes sturdy whole cloth out of discarded potato chip bags and gain insight into how each of us can FACE THE EARTH and contribute to her resuscitation.

Screening is followed by Q&A with the film director, artist and Special Guest.

Admission is free, but since seating is limited we request that you RSVP HERE.

FACE THE EARTH is copyrighted 2017 by Ming-Chuan Huang and Chin Chih Yang.

About Chin Chih Yang
Multidisciplinary artist Chin Chih Yang was born in Taiwan, and has resided for many years in New York City. He holds degrees from Pratt Institute and Parsons School of Design. Among other honors, he has been awarded grants by The New York State Council on the Arts, the New York Foundation for the Arts, Lower Manhattan Cultural Council, Franklin Furnace Archive, MacDowell Colony and more. Yang’s interests in ecology and constructed environments have resulted in interactive performances and installations in the United States, Poland, Finland, Austria, Germany, Taiwan, Singapore and Hong Kong. He has exhibited/performed at Rockefeller Center, the United Nations, Union Square Park, The Queens Museum, the Godwin-Ternbach Museum, Exit Art, Flux Factory and in 2016 the Museum of Contemporary Art, Taipei hosted a major retrospective. All told, Yang strives to lead audiences to a more direct awareness of the effects of contemporary technology and engender compassion for all humanity.

About Ming-Chuan Huan
Born in Chiayi, Taiwan in 1955, Huang Ming-Chuan lives now in Taipei. Graduating from the Department of Law of National Taiwan University, he left Taiwan to study Lithographic Printmaking in Art Students League of New York and Fine Arts and Photography at Art Center College of Design in Los Angeles. Huan’s feature film THE MAN FROM ISLAND WEST claimed an Excellent Cinematography Award at Hawaii international Film Festival and a Silver Screen Award at Singapore international Film Festival in 1990. In 1998 his FLAT TYRE was awarded Best film in the non-commercial category at Taipei Film Festival and Jury Award at the Golden Horse Festival, Taiwan. As a documentary director, Huang has made numerous documentaries on art subjects and won the first Taishin Arts Award’s Visual Arts Prize in 2003. He has served as a board member of Taiwan’s National Culture and Arts Foundation (2000-03), National Film Archive Foundation (2002-05), Public Television System Foundation (2005) and CTV (2008-present). Huang was chairman of international jury of Taishin Arts Award’s Visual Arts Prize (2005), and feature length competition juror of Taiwan International Documentary Festival (2008). He was elected as Chairman of the National Culture and Arts Foundation in early 2008. Ming-Chuan has been the artistic director of the Chiayi City International Art Doc Film Festival since 2014.

The Face The Earth’s Screenings in Partnership & Sponsorship: