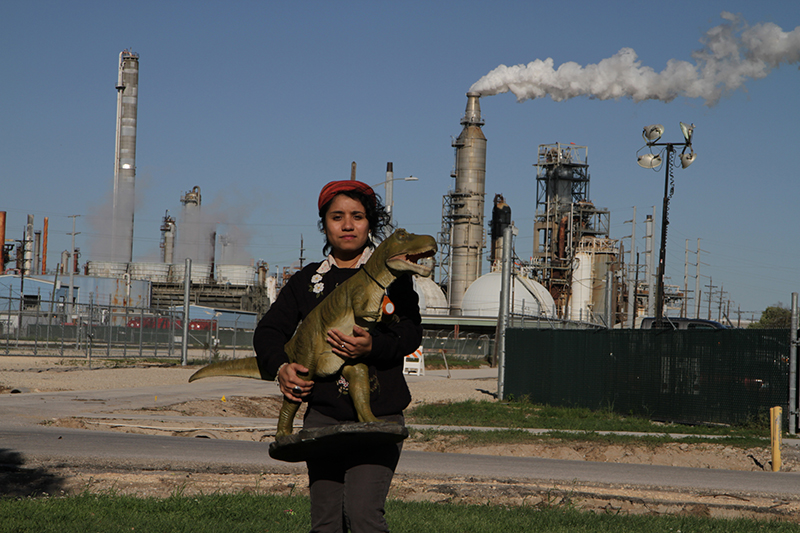 Care as Culture: Artists, Activists and Scientists Build Coalitions to Resist Climate Change
A Convening Around the Peace Table

Mierle Laderman Ukeles’ Peace Table, serves as the site for convenings on peace, from the personal to citywide to global. Ukeles and the Museum have conceived a series of public programs meant to engage and contemporize some of Mierle Laderman Ukeles: Maintenance Art’s important themes.

Care as Culture is the final convening that brings the perspectives of eco-artists, activists, and experts on climate change together to interrogate and enrich culture’s place in the movements for environmental justice. Reflecting on a hallmark of Mierle Laderman Ukeles’ practice, one goal of the roundtable is to brainstorm methods for coalition building across these disciplines, effectively multiplying the power to confront an environmental, political, and spiritual crisis in our increasingly antagonistic time. How can we create a broad cultural movement to combat the policies of a new administration intent on dismantling many of the safeguards that reduce the effects of climate change?

To demonstrate the benefits and challenges of coalition building, artists will present case studies from their own work and brainstorm what future possibilities might exist for this strategic model to continue. These will be followed by a larger discussion with a group of invited eco-artists, activists, and scientists about how successful coalitions can be introduced, and the urgent ways artists can begin the process of coalition building. What prevents us from working together and how can we advocate for change?

Newton Harrison will present on the concepts, outcomes, and collaborations that were part of his 1995 project with Helen Mayer Harrison, A Vision for the Green Heart of Holland. At the request of the Cultural Council of South Holland, the Harrison Studio undertook a consideration of the Green Heart, a vast farm centering a ring of cities including Amsterdam, Rotterdam, and Utrecht. The Green Heart can be seen as a great central park for this ensemble of cities, which in turn are an economic and cultural center in Europe. In 1994-5 the value of the site was being debated, its identity questioned, and its very existence threatened by development. In response to this situation the Harrison Studio proposed a new vision for the Green Heart and the Randstad of Holland from their unique position as outsiders in the area. In the proposal, new boundary conditions emerged that would clarify the roles of the urban, the ecological and the farming communities which altogether comprise a major part of the landscape of Holland. The piece redirected the approximately $230 billion economic engine that was needed to develop the area, while saving over 14 villages from being destroyed. In 2001 the Ministry of Agriculture, Environment and Forestry made official changes to the Dutch map based on the Harrison’s proposal. The Harrison Studio consists of Helen Mayer Harrison (born 1929) and Newton Harrison (b.1932) who are among the earliest and the best known ecological artists. Working with biologists, ecologists, architects, urban planners, and other artists, the Harrison Studio initiates collaborative dialogues to uncover ideas and solutions that support biodiversity and community development. They have had numerous international solo exhibitions, and their work is in the collections of many public institutions, including the Pompidou Center, the Museum of Modern Art, and the Chicago Museum of Contemporary Art.

The mission of The Natural History Museum is to affirm the truth of science. By looking at the presentation of natural history, The Natural History Museum demonstrates principles fundamental to scientific inquiry, principles such as the commonality of knowledge and the unavoidability of the unknown. They inquire into what we see, how we see, and what remains excluded from our seeing. Through this inquiry, The Natural History Museum acts as museum anthropologists attuned to the social and political forces inseparable from the natural world. The role of The Natural History Museum is to orchestrate various persuasion, support, and provocation strategies to help move science and natural history museums toward a more engaged practice with the communities they serve, and with those who are invested in a practice of science that is inclusive and reflective of our current and future planetary realities. The museum is the latest project of Not An Alternative, a NY-based collective that works at the intersection of art, activism, and critical theory. Its mission is to affect popular understandings of histories, symbols, and institutions through the occupation and redeployment of popular vernacular, semiotics, and memes. Named in The New York Times and ArtNet’s “Best in Art in 2015” round-ups, the group’s work has been widely exhibited nationally and internationally. Speaking on behalf of the collective is co-founder Beka Economopoulos. In her presentation “Tactics for the Trumpocene” she will address the museum’s latest work to build coalitions between scientists, Indigenous communities and museum professionals.

Natalie Jeremijenko will be presenting on QUADRIVIUM, a public experiment and art installation curated by the Helen Day Art Center in Stowe, Vermont and commissioned for SprucePeak by the Stowe Mountain Lodge. The commission, with a soft opening on February 11th, will accompany an exhibition and ongoing series of workshops, design reviews and participatory promulgations at the Helen Day Art Center addressing Mutualism and Mutualistic Systems. Jeremijenko is currently taking nominations for the project’s advisory board, Doctors without Disciplinary Borders (DrX), who will provide feedback, local expertise and input on developing a delightful and delicious climate plan for this verdant area. The climate plan will include achievable transformations that are convivial, community driven and culturally led to measurably improve human and environmental health. The plan will also aim to foster the intellectual and cultural leadership of Vermont in reimagining and redesigning our collective relationship to natural systems. Jeremijenko is an Associate Professor in the Visual Art Department, NYU. Her doctoral studies include biochemistry, engineering (mechatronics, space-systems and precision engineering), neuroscience and History and Philosophy of Science. Jeremijenko’s practice develops the emerging field of socio-ecological systems design (or xDesign) crucial in the Anthropocene, using attractions and ongoing participatory research spectacles that address the C21st challenge to reimagine our collective relationship to natural systems. This integrates diverse strategies to redesign energy, food and transportation systems that can contribute to the common good, increase soil, aquatic and terrestrial biodiversity and improve human and environmental health. Jeremijenko directs the Environmental Health Clinic—facilitating public and lifestyle experiments that can aggregate into significant human and environmental health benefits.

Mary Mattingly is an artist who takes societal consumption and ecological crisis as points of inquiry. Working with community members ranging from scientists to engineers, students, and neighbors, she co-creates sculptural ecosystems in urban spaces. Mattingly is engaged in questions about how art can influence policy and strengthen the commons. Mattingly will present on Swale, an experiential public space and artwork on New York’s waterways that provides access to free food through perennial urban agriculture. In 2016, Swale launched at Concrete Plant Park in the Bronx with partners Youth Ministries for Peace and Justice, the Bronx River Alliance, Rocking the Boat, the Point, the Urban Field Station, Partnership for Parks, and the New York City Department of Parks. On February 12th, Mary Mattingly will be presenting on Swale‘s work along with coalition members Lindsay Campbell, Dariella Rodriguez, Bram Gunther (Co-Director of the NYC Urban Field Station), and docents from the Youth Ministries for Peace and Justice: Brandon Kane and Anthony Lespier.

Image: The Natural History Museum (a project of art collective Not An Alternative), Operation Dinosaur, photo from the exhibition “Mining the Houston Museum of Natural Sciences”, 2015.

The Queens Museum is grateful for significant in-kind support from the New York City Department of Sanitation. Additional in-kind gifts were provided by Shine Electronics, Inc.; Delta Air Lines; W X Y Architects; Lower East Side Print Shop; and SITU Fabrication. The accompanying publication is supported, in part, by the Elizabeth Firestone Graham Foundation and Furthermore: a program of the J.M. Kaplan Fund.