While the 1939 World’s Fair has remained in the public consciousness for decades as a thrilling moment in modern architecture and design, a remarkable and historic pavilion designed by Salvador Dalí has faded from memory. Dalí’s Surrealist pavilion, Dream of Venus, featured a spectacular façade made up of soft curves and protrusions reminiscent of Gaudí’s Pedrera building, and was accessorized with semi-clothed beauties acting out an underwater fantasy. Neither sleek nor functional, Dream of Venus was an extraordinary achievement of the artist’s personal vision and, for fairgoers, an introduction to the often-mystifying Surrealist movement. Opening June 22, 2003 and on view through September 7, the Queens Museum of Art presents Salvador Dalí: Dream of Venus, an exhibition exploring the monumental installation through Dalí’s paintings, drawings, manipulated and documentary photographs, films and archival documents, many of which are on public view for the first time.

This exhibition was organized by the Museum of Contemporary Art, North Miami; “la Caixa” Foundation and Fundació Gala-Salvador Dalí. It was originally presented at the Teatre-Museu Dalí in Winter 1999-2000 and traveled to the Museum of Contemporary Art, North Miami Spring 2002. It was curated by Monste Aguer, Fèlix Fanés, and Bonnie Clearwater. Its presentation at the Queens Museum of Art in Flushing Meadows Corona Park, where the 1939 World’s Fair was held, is augmented by art and objects from the museum’s collection.

Although it was razed along with other pavilions from the Fair, the creation and brief existence of Dream of Venus was well-documented. It is now recognized as one of the earliest full-scale installation pieces, which included sound and performance to make it one of the first multi-media artworks. Lured by a siren’s recorded chants (sung by B-move legend Ruth Ford), visitors purchased twenty-five cent tickets from a fish-headed booth, and then passed through an entrance flanked by two towering legs clad in stockings and high-heels. Visitors could see reproductions of Leonardo da Vinci’s Saint John the Baptist and Botticelli’s Birth of Venus through openings in the irregular façade, which artist Urszula Trudnos will recreate in a painted mural in the museum’s largest gallery.

Inside the building, visitors entered a lavish grotto, the centerpiece of which was a nude sleeping Venus, who reclined in a 36 foot-long bed covered in white and red satin, flowers, and leaves. Her dream was staged underwater in the adjacent aquarium, where women wearing revealing costumes adorned with fins and spikes milked a mummified cow, tapped on giant typewriter keys, and answered oversized submerged telephones. Black and white and color photographs by Horst P. Horst, George Platt Lynes, Eric Schaal, Carl van Vechten, and others, document the architectural space as well as the artists who created it, and the actors and models who swam and sunbathed throughout.

Contemporary press remarked that the pavilion “shrewdly combine[d] Surrealism and sex,” delighting the organizers of Dalí’s Dream of Venus pavilion, who believed that it would do more to advance the understanding of Surrealism in America then “a dozen high-brow exhibitions.” The exhibition documents the trials Dalí faced in realizing his design, from a contentious series of letters to a rubber manufacturer regarding the color of a mermaid’s tail, to censorship by the Fair’s Amusement Area chairing committee, who felt, “A woman with a tail of a fish is possible; a woman with the head of a fish is impossible.” Among the major modifications that arose between the time Dalí formulated his initial ideas and the final result of the project, the title was itself was negotiated from the artist’s first choice, “Dalí’s Naked Dream.” The changes led him to publish a pamphlet titled Declaration of the Independence of the Imagination and Rights of man to His Own Madness (on view in the exhibition). Incredibly, Dalí hired a small plane to fly over the city and drop copies of this manifesto on Manhattanites below.

The construction of the pavilion came on the heels of Dalí’s one-man exhibition at New York’s Julien Levy Gallery, where he had created controversy by reproducing an altered cover the exhibition catalog. The original catalog cover featured the Fair’s ultramodern symbols, the Trylon and Perisphere, while Dalí’s version remodeled the symbols and soft, bursting forms. Oil paintings are on view in this exhibition, including The Image Disappears, (1938), and Automobile Giving Birth to a Blind Horse Biting a Telephone, 1938.

Salvador Dalí: Dream of Venus is co-organized by the Queens Museum of Art and the Fundació Gala-Salvador Dalí. The Queens Museum is grateful to The Rosalyn Savings Foundation, Silvercup Studios, The Dominick and Rose Ciampa Foundation, The Embassy of Spain, Washington, D.C., and Murray Tarnapoll for their support of this exhibition. 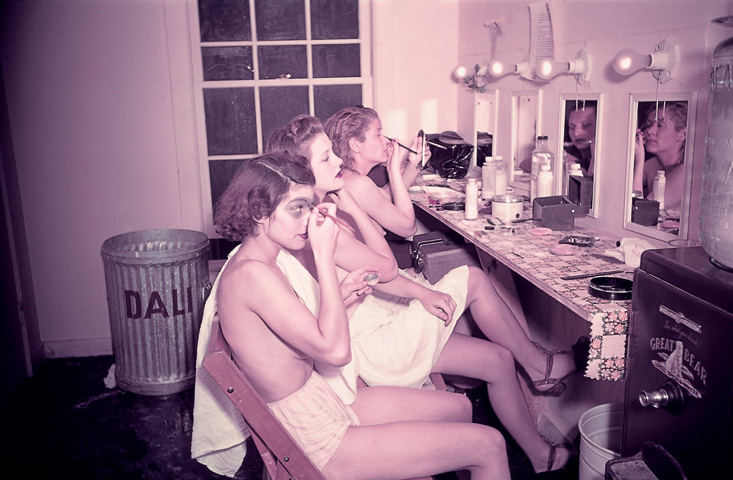