Red Lines Housing Crisis Learning Center, a large-scale installation of models, drawings, photographs, and videos by artist-designer Damon Rich, melds Sesame Street graphics with do-it-yourself investigations into the intricacies of real estate finance. For Red Lines, Rich has collected the history and material culture behind the current economic crisis into an experimental site for reflection and learning. Explore the threatening spikes and troughs of interest rates in the form of a plywood construction 40 feet long and 14 feet tall; enter a ghostly looming bust of Frederick Babcock, pioneer of real estate appraisal; and walk through photographic panorama of houses in Detroit and its suburbs. Photographs and video interviews with players in the field—from community activists to investment bankers—transform abstract financial markets into networks of, if not humane, then clearly human positions.

Rich’s project was initiated during a 2007 artist residency at the Center for Advanced Visual Studies at the Massachusetts Institute of Technology as part of a project of the Center for Urban Pedagogy (CUP), the Brooklyn-based nonprofit organization founded by the artist. Further developing the work as part of the Queens Museum’s residency program, Rich will design new pieces for the famous Panorama of the City of New York and museum café. Rich, QMA, and CUP will organize a series of talks and screenings both on- and off-site, partnering with New York City community organizations to bring people together around urgent housing issues throughout the summer.

Today, against the backdrop of the Subprime Meltdown that has pushed people out of homes, ruined neighborhoods, bankrupted institutions, and contributed to a global economic crisis, Red Lines Housing Crisis Learning Center aims to broaden and enrich the urgent conversation about how our society finances its living environments.

Red Lines Housing Crisis Learning Center is presented in dialogue with The University of Trash, an exhibition by artists Nils Norman and Michael Cataldi on view at SculptureCenter May 10–August 3, 2009. Norman and Cataldi propose a radical imagination and radically different space might look like coming out of this crisis. The two exhibitions will co-host public programs and each will include an installed element from the other.

Red Lines Housing Crisis Learning Center was created by Damon Rich as a project of the Center for Advanced Visual Studies at MIT and the Center for Urban Pedagogy (CUP). 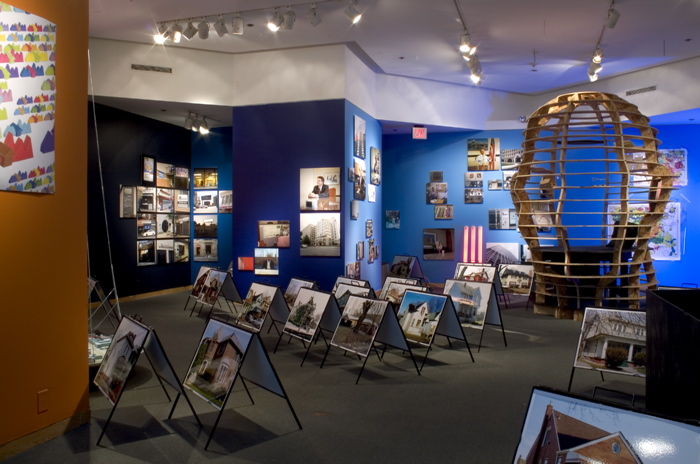 The Andy Warhol Foundation for the Visual Arts and Artists & Communities, a program of Mid Atlantic Arts Foundation, which is made possible by major funding from Johnson & Johnson, the New Jersey State Council on the Arts, and the JPMorgan Chase Foundation. A publication funded by The Graham Foundation for Advanced Studies in the Fine Arts will be available during the exhibition. Additional support provided by the New York City Department of Cultural Affairs and New York State Council on the Arts