“By holding fast to the Reason of the ancients, the present is mastered, and the origin of the past understood. This is called Reason’s Clue.”

Inspired by the Tao Te Ching, the 6th Century B.C. text by Chinese philosopher Lao Tzu, Reason’s Clue focuses on contemporary art that engages the diverse ideas and attitudes about the history and culture of China. Eight artists working in China, Taiwan, and the United States examine the ways in which history reflects on and influences the present. Moving away from the simplistic binaries of past and future, East and West, and negative and positive forces, the works in the exhibition explore fluid interactions and integral structures between the opposites. The artists meld traditional and contemporary sensibilities to render their own understanding of the various subject matter including language, art history, popular culture, archaeology, and global politics.

As a Chinese artist active in the United States, witnessing radical social changes in China and experiencing cultural differences in the United States, Cui Fei finds that her thinking has been permanently altered. In response to a constantly changing outside world, she seeks the underlying es-sence of our lives, something that is real and permanent, which cannot be altered by social, political, cultural, or geographic conditions. Cui sees nature as consistent and ordered, thus providing a therapeutic agent for healing and harmony in an otherwise chaotic world. She utilizes materials found in nature, such as tendrils, leaves and thorns composing a manuscript symbolizing the voiceless messages in nature that are waiting to be discovered and to be heard.

Cui’s work draws from both Chinese and Western philosophies. The concept of nature in her Chinese heritage, which emphasizes the interconnectedness of all living things, and the Western theory of transculture, which stresses living beyond the limitations of any particular culture, offer her a unique perception of relationships between cultures; between cultures and nature; and between nature and human beings.

This series of works is meant to simulate an atlas – an old book of maps continuously thumbed through; each map covering two pages of the book. Atlases profit from the facts that first impressions are the most lasting, and also from the respect given to reference books. This is especially true when cast as old scriptures. Such a book gives its author an opportunity to achieve a certain purpose. Inspired by such motivations, Hong Hao decided to issue a new volume of scriptures to reorganize this dynamic world; he named it Selected Scriptures.

The general idea of this volume is to establish a standard deviating from the normal order. First it is necessary to deconstruct the culture’s paradigm of information and then reprogram it, establishing a truly original semantic classification. The purpose is to destroy customary correspondences, conventional regulations, and meanings; afterwards, one repeatedly enhances the redefined meanings and raises them to the level of experience. Subsequently, they will be just like the ancient scriptures – quite sanctimonious.

Hong has long had an interest in maps, especially historical maps since they evoke an association with our daily routine. The world map is the most direct and economical way for us to conceptualize the world, so from a certain aspect it determines our global perspective. Hong hopes that his alteration of these maps causes a corresponding alteration of the viewer’s outlook on the world.

For both the artist and audience, a work of art offers observation beyond the dense forest brush where most attention is usually fixed. Su Dongpo wrote: “Experience the world and walk among humankind, see oneself resting on cloudy peaks.” Art is a means of reaching those peaks. This detachment requires focusing awareness on those moments that are reflective of the grandeur of all that has come before, yet are at the same time distinct in their representation of the present; where elements of old and new history merge in the watercourse of time, while simultaneously maintaining their separate identities. Some of these moments arrive spontaneously; others are found after careful scrutiny. Although there is an innate connection with them, their manner of representation is often abstract, extending beyond the frame; to fully enter them requires effort. Art must be raised to the stature of such moments in order to serve as a vehicle for them. The past bears gifts which help us to achieve this: materials and methods that have evolved over millennia, an ever growing wellspring to help in the integration of artistry, instrumentality, and aesthetics. More important than any labels assigned to these gifts (for example, “Eastern” or “Western”) is how they may be brought together to convey the essence of such moments. If the moment can be successfully embodied as a piece of art, it can serve the future not only as a record of that chosen moment, but also as an object for appreciation, and as a stepping stone on the path of artistic potential.

Xu Bing’s Book from the Ground is a novel written in a language of icons. Regardless of cultural background, one should be able to understand the text as long as one is thoroughly entangled in modern life. A computer program accompanies the book. As the user types English sentences, the computer translates them into this language of icons. It can function as a dictionary.

Language exists in a political, economic, and cultural matrix. Emperor Qin Shi eliminated the Six Kingdoms and unified the Chinese language; Mao popularized “standard” Mandarin characters through political means. Both revisions were undertaken with the aim of unifying a country. This new system also draws its strength from political and economic factors but does not take the nation-state as its basic unit. It is rooted in the market rules of the global economy and world politics.

This new language transcends structures of knowledge and limitations of geographic and cultural specificity; it reflects the logic of real life and objects themselves rather than any preexisting text-based knowledge. Comprehension is not contingent upon the reader’s level of education or knowledge of literature, but instead stems from his/her experiences and way of life. Moreover, this language need not be taught or learned through traditional educational models. Regardless of your cultural background or mother tongue, you will be able to read this book as long as you have experience of contemporary life. The educated and illiterate should be able to enjoy equally the pleasure of reading.

By creating an imitation civilization, Tu Wei-Cheng has constructed new idols and a new system of myths, and used these to highlight an absurd but rational process that refers equally well to a current or future civilization. The multidimensionality and uncertain language of these projects invokes the ambiguity and dissonance of contemporary life. The use of a mixture of media, including murals, stone reliefs, tablets, carvings and other ancient civilization forms, together with modern information products such as computers, computer symbols, encryption, and so on is according to Tu a “technological imitation of ancient objects.” This collage of shapes and patterns from different civilizations and eras creates an ultimately disorienting sense of displacement in time and space.

“When reality can be imitated, falsehood can become truth. At the same time, objects can be replicated, information infuses past, present and future, conviction follows the material object of faith, and the self becomes lost in self-searching. As a result, life is filled with doubts and a lack of trust, and we lose all footholds on which to depend. I then stand in a time and place of disorder and confusion, looking at the artificial myths for which I work and worship, and through which I confirm my identity. Only then do I feel some baffling consolation.”

Void, Substance, and Manifestation: Some recollections to do with this exhibition

One spring night in 1981, Lin Ju was wandering on the waterfront in the port city of Keelung, in northern Taiwan, having had quite a bit too much to drink, as was usual with him then. Nearby, a girl got into a tussle with a couple of foreign sailors. Lin confronted the sailors, and mayhem ensued. When the police arrived, all were badly injured. Lin lost his right testicle.

After recuperation, he was sent to a prison ward in Hualian, where he spent three years and 90 days. It was up in the coastal mountains, with an excellent ocean view. He took great care of both his body and mind at that time, constantly exercising them with great care. Lin’s eccentric, if not weird, behavior emanated an alternate sort of sensuality, and he became a playmate to some of the prisoners.

After Hualian, Lin went back to his life as a drinker, living off friends. The following year, strictly to support himself, he held an exhibition in Taipei, showing works based upon scribbles and notes taken in Hualian. That was the first phase of Lin’s life as an artist.

Canonization of the Gods

Past, Present, and Future are the three ages enunciated by Buddha. People in every era find some kind of heroic characters or idols to delude themselves about via illusion, fairy tale, and stories. They fantasize that these virtual heroes will one day save the common people from this hopeless world. This seems to be the only way they can obtain spiritual satisfaction and be rescued.

In the colorful world, men send these fictional heroes to rescue themselves and the world. This fashion is a typical contemporary phenomenon. Combining justice and morality with familiar cartoon and comic characters, the fictional heroes made by men save the world and themselves. 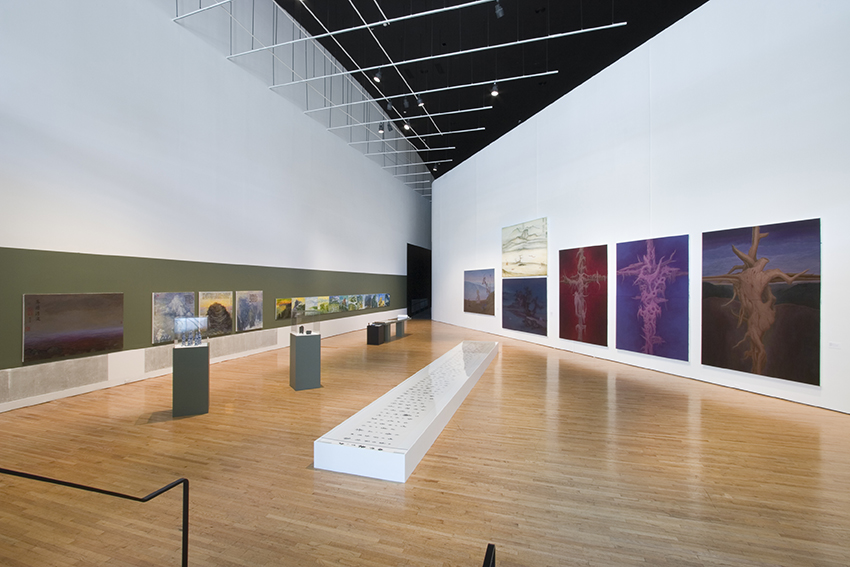