Exhibitions - About a Theological Situation in the Society of the Spectacle

The Queens Museum of Art is pleased to announce a special U.S. premier of Japanese artist Masayuki Kawai’s video work About a Theological Situation in the Society of the Spectacle (2001). Selected by guest curator Cristine Wang, Kawai’s work will be on view in the museum’s small theater from November 3-December 1, 2002, as part of New York City’s landmark Asian Contemporary Art Week.

About a Theological Situation in the Society of the Spectacle (6 min, 30 sec, DVD) takes French Situationist theorist Guy Debord’s seminal text, Society of the Spectacle (1967), as its main point of departure in a critique of the myths of “”life”” and “”personality”” in contemporary Japanese pop culture. Debord’s work remains one of the great theoretical texts on modern-day capitalism, visual culture, and the influence of the media over the evolution of social relationships. Kawai states: “”I use Augustinus’ theology of “”the Trinity”” as an analogy to analyze and critique the situation, and quote images from the spectacle to adopt a form of exaggerated imitation of mass media techniques such as quick cutting & text slogans.”” 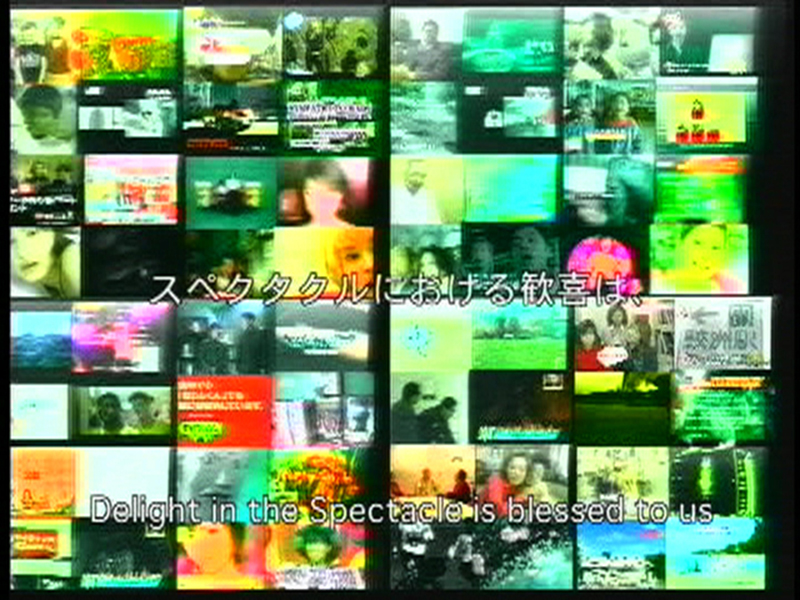 — More information about this project

Support for this project is gratefully acknowledged from Name.Space, Progressive IMG, and The Wang Family Trust. Additional support from Frederieke Taylor. Closing party sponsored by Clay.