Exhibitions - Kora: A Meditation on Pilgrimage

Kora: A Meditation on Pilgrimage

In the Tibetan Buddhist and Bön traditions, a kora is a type of pilgrimage made through repeatedly walking and meditating around a sacred site or temple, the word itself meaning circumambulation or revolution.  As a counterpoint to Anonymous: Contemporary Tibetan Art, the artists featured in Kora: A Meditation on Pilgrimage examine pilgrimage in its broadest possible context, with many creating site specific works for the Panorama’s unique environment. Footprints of an imaginary devotee encircle the entire space, connecting works that explore different ideas of veneration. Each artist occupies a wall, suggestive of stages on the journey. The architecture of the Panorama and its ramp structure, make it impossible to complete a conventional circumambulation. It is a discontinuous or uncompleted kora surrounding the three-dimensional depiction of the city of New York.

In The Last Supper by Tulku Jamyang, there is an obvious link to this idea of a ruptured circle: the calendar of rituals performed by Dalai Lamas in Tibet since the 16th century, cannot for the foreseeable future be performed there. As exiles, each of the artists live in multi-cultural cities, where exposure to other ideas and cultures is a daily experience that can feel like sensory overload. Outside of Buddhist culture, the speed of modern life and ideas of self-expression and identity are everywhere, and have become a currency in their own right within the global art market. The works collectively imply a mourning for Tibet experienced by those in exile, or an acceptance and tentative embrace of multi-culturalism. The exhibition can also be seen as an attempt to encircle the city in a different philosophy, pointing the viewer toward a life of selflessness and contemplation. Visually, many of the pieces in the exhibition show traits of the attention to detail and technique of Thangka—traditional Tibetan painting, though the ideas behind some suggest a break with religious tradition, an incomplete pilgrimage or rupture of the path to enlightenment. 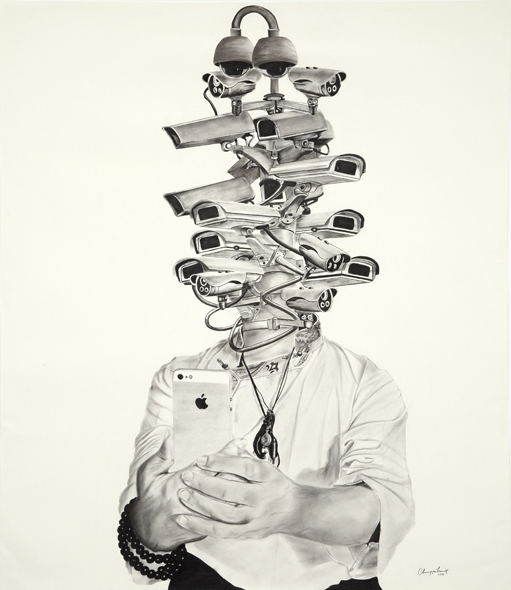