The Queens Museum of Art has commissioned four temporary, site-specific artworks in Corona Plaza (103rd Street and Roosevelt Avenue), just a few blocks away from the Museum’s home in Flushing Meadows Corona Park. For this second volume of commissioned projects, QMA has invited Sara Reisman to act as curator. These artworks are part of a larger Heart of Corona Initiative in which the Museum and community partners work together to improve the health of community residents, beautify the neighborhood, and activate the public spaces in the area.

The Artists – Mike Estabrook, Lin + Lam (Lana Lin and Lan Thao Lam), Miguel Luciano, and vydavy sindikat (the Russian phrase for “you and you collective”) were invited to develop projects that would take into account the specific conditions of the plaza. The resulting artworks are designed to engage the public, both from the community and elsewhere, in reciprocal exchanges that highlight the construction of urban mythologies, visual perception, and everyday artistry. As part of the experience of the exhibition, viewers are welcome to explore Corona’s diverse dining options, unique retail shops, historic sites, and recreational spaces. An accompanying exhibition at the Museum describes, documents and centralizes the public artworks on view and performed around the plaza.

The Adventures of La Coronita, A Collaboration Between the People of Corona and Mike Estabrook, 2008

“La Coronita” is a character whose actions have been scripted by individual community members. Once a week, throughout the summer, a comic strip and a short animation are published depicting The Adventures of La Coronita. These include: her flight around the Unisphere, shopping with her family, witnessing a car accident, and having a western style showdown with a Corona beer bottle. These animations are on view in the project room at the Queens Museum of Art, where a new edition is added each week. The comics will be published, all together, in the September issue of The Community Journal, a local, bilingual newspaper. On September 20, copies of the compiled DVDs and comics will be distributed to the community. The Dominico-American Society, Brian Pu-Folkes from The Community Journal, and the Cooper Union School of Art Computer Center provided support for this project.

Mike Estabrook is an artist based in Brooklyn, NY. Estabrook uses drawing, animation, video, and painting as a means of embodying a political imagination that can be both cute and grotesque. His work has been shown at ABC No Rio, P.S.1 Contemporary Art Center, The Queens Museum of Art, The Bronx Museum, PPOW, Esso, and other spaces in New York and abroad. In 2005-6, he participated in the Artists in the Marketplace program at the Bronx Museum, in 2007 at Elsewhere Artists Collaborative residency in Greensboro, NC; and in 2007-8 at the Lower Manhattan Cultural Council Workspace Program. He Received his MFA from Queens College in 2005.

Unisex visually and sonically maps of the diversity of the Corona population as expressed through the voices and daily activities of neighborhood barbers, stylists, and their clients. Hair salons and barbershops have long served as informal settings for local conversations and social networking. The dynamic between stylist and client can be similar to therapy, requiring trust and intimacy.

These interactions between the artists and the people of Corona are documented in a video installation at the museum and in the salons listed below.

Pimp my Piragua is a multi-media, mobile public art work that combines tropical nostalgia and urban fantasies in a hyper-modified street vendor’s pushcart. Piraguas are cups of shaved ice dowsed in tropical flavors that you can buy from push carts on hot summer days. They are nostalgic symbols of the tropics, recreated by transplanted Latino communities throughout New York. In Pimp my Piragua, a humble pushcart gets remade into a lowrider fantasy-mobile that commemorates the innovations of Latino street vendors while questioning materialist fantasies of attainment. Artist Miguel Luciano will tour his project around the neighborhood for three weeks in August.

Miguel Luciano received his MFA from the University of Florida. His work has been exhibited in New York and New Jersey at the Brooklyn Museum; El Museo del Barrio; the Bronx Museum of Art; Chelsea Art Museum; the Newark Museum; and the Jersey City Museum; and internationally at the Ljubljana Biennial in Slovenia, San Juan Poligraphic Triennial in Puerto Rico, and the Zverev Center for Contemporary Art in Moscow. His work is in the permanent collections of the Brooklyn Museum, El Museo del Barrio and the Newark Museum, and has been reviewed in The New York Times, Village Voice, Newsday, and Utne Reader.

Related video works are on view at La Placita Ice Cream at 104-04 Roosevelt Ave.; and Urena’s Jewelry at 40-04 National St.

Spectacle Path invites pedestrians and visitors to become part of new visual experience, one in which familiar and mundane views will be multiplied, magnified and distorted with Fresnel lenses and kaleidoscopes installed in a storefront and on park’s fence. The path is installed in storefronts throughout the neighborhood.

vydavy in Russian literally translates to “”you and you””. Paired with sindikat, the name loosely translates as “you collective”. The collective’s activities include video, performance art, poetry and architecture. In recent years, vydavy sindikat initiated a number of community based projects such as Public Gathering (2005), a Russian- English children’s paper (2005-present), and Commuter’s Dream (2007- present).Work by vydavy sindikat has been exhibited at the Center for Architecture of the American Institute of Architects (2003), as part of Float at Socrates Sculpture Park (2005), in Slow Revolution at Rotunda Gallery (2006), in their solo exhibition Computing the Social at LMAKprojects (2006), and the Second Moscow Biennial (2007).

Corona, Queens (known as Newtown and West Flushing until 1872) was farmland during America’s colonial era with estates owned by English and Dutch settlers, and Africans arriving as slave labor. Because of the suburban exodus of American cities in the 1960 and 70s and new immigrants, the white population in Corona decreased dramatically.

African American and Latin American immigrants began to move into Corona in larger numbers during this time. Since then Community District 4 (Elmhurst-Corona) has continued to be a destination for recent immigrants from Latin America and Asia, causing a swell in its overall population from 118,428 in 1980 to 167,005 in 2000, according to census reports. These figures are likely much higher due to the many undocumented residents in the area. Dominicans, Mexicans, Colombians, and Ecuadorians operate many of the businesses and account for most of the population in and around Corona Plaza with a smaller number of Asians, Caribbeans, and Latin Americans from other countries. The plaza, with two neighboring schools (P.S. 16 and P.S.19), a subway station overhead (103rd Street / Corona Plaza), and a much used public park (Linden Park) nearby combines with local businesses to form a bustling mix of shopping, dining, entertainment, and leisure. Among many other notable features, Corona is home to Lefrak City a large public housing complex built in the 1960s; jazz legend Louis Armstrong’s House; Flushing Meadows Corona Park, the former site of a massive ash dump, then the 1939 and 1964 World’s Fairs; and the Langston Hughes Community Library and Cultural Center, home of the Black Heritage Reference Center of Queens County. 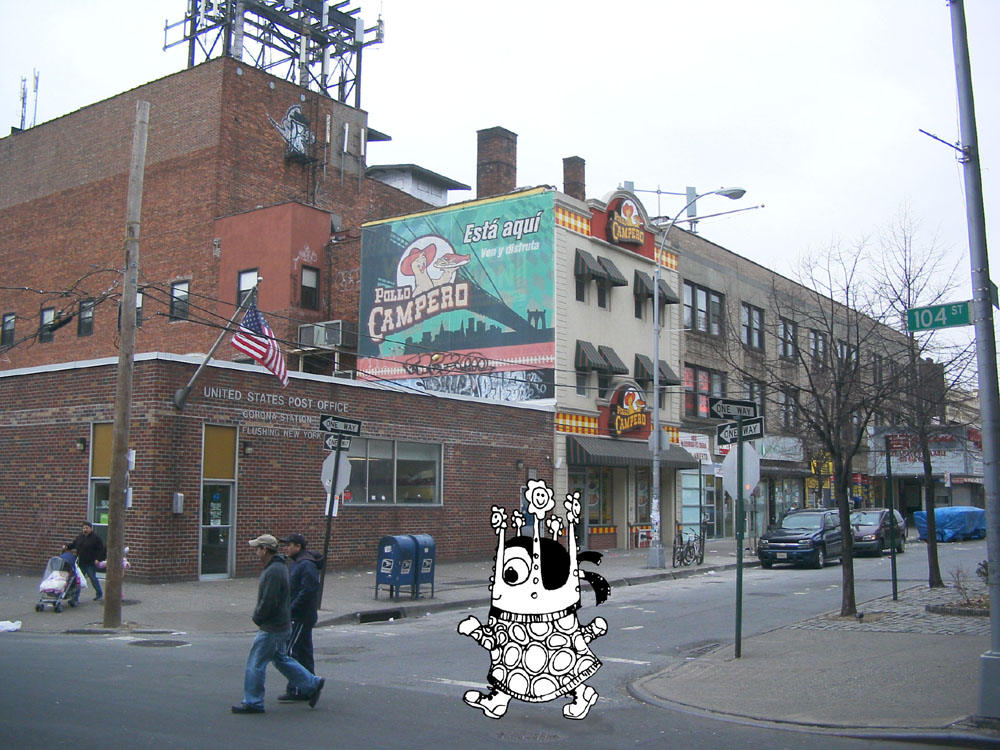 The Institute for Museum and Library Services and the Ford Foundation, with additional support from NYC Department of Cultural Affairs and the New York State Council on the Arts. Thanks to our partners: Community Board 4, NYC Parks Department, Antioqueña Bakery, Dominico American Society, Corona National Community Center, Western Union, Heart of Corona Initiative Partners, participating hair salons and barbers, and Corona Business Corp.