Queens Museum | Back on the Map: Revisiting the New York State Pavilion at the 1964/65 World’s Fair

Exhibitions - Back on the Map: Revisiting the New York State Pavilion at the 1964/65 World’s Fair

Back on the Map: Revisiting the New York State Pavilion at the 1964/65 World’s Fair

“The Texaco Road Map is the large-scale terrazzo art pavement commissioned for the New York State Pavilion. Designed by renowned American architect Philip Johnson for the 1964/65 World’s Fair, the Pavilion is located in Flushing Meadows Corona Park, next door to the Queens Museum of Art (former home of the New York City Pavilion). Commissioned by Governor Nelson Rockefeller, the New York State Pavilion featured a complex of structures: a Theaterama building, three observation towers, and the “Tent of Tomorrow,” a 12-story, open-air elliptical pavilion capped by the World’s largest suspended cable system roof fitted with colored acrylic panels. For the floor of the “Tent of Tomorrow,” Johnson commissioned the largest-known representation of any area of the earth’s surface: a 130-foot-by-166-foot terrazzo replica of a Texaco New York State road map. A fusion of Pop Art imagery and traditional craft techniques, the Texaco Road Map was a crucial component of Johnson’s Pavilion and is considered – alongside graphic paintings by Roy Lichtenstein on the Theaterama’s exterior–one of the first public Pop Art monuments. Like many of the World’s Fair structures, the New York State Pavilion was built as a temporary structure, and it is only in recent years that it has been recognized as an important historical icon. However, after years of exposure to weather conditions and vandalism, the Texaco Road Map now lies in a state of advanced disrepair. This threatens the continued existence of the Texaco Road Map as a cultural icon of Flushing Meadows Corona Park and American art and history.

Back on the Map aims to inform and engage the public about the significance of this historic gem. A culmination of conservation activities by the City of New York Department of Parks & Recreation in collaboration with the University of Pennsylvania School of Design Graduate Program in Historic Preservation, the exhibition at the Queens Museum of Art will feature restored sections of the Texaco Road Map and elaborate the project findings through text panels and an interactive Web site. The Museum will also exhibit the process by allowing visitors to view the restoration from a uniquely close angle: they will have the opportunity to observe one of the conservators as he/she works on the restoration within the Museum’s galleries. 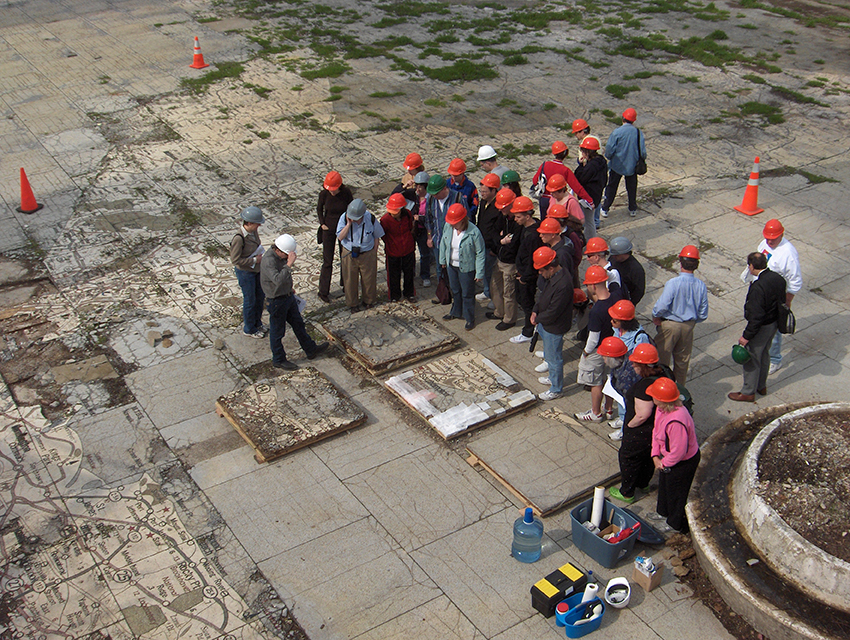 The National Endowment for the Arts, The Samuel H. Kress Foundation, New York City Department of Parks and Recreation, and the School of Design, University of Pennsylvania