2 & 3pm: Museum educator will lead exhibition tours of our retrospective of Chinese American artist Zhang Hongtu. He playfully combines East and West, high and low, past and present. From interpretations of European artists like Van Gogh and Warhol and remakes of ancient waterscapes of Chinese master Ma Yuan to fusions of historical Chinese iconography with American consumer products, Zhang’s work facilitates humorous mashups that open up the play between cultures.

1:30-4:30pm: Drop-in Artmaking Workshop will explore Zhang Hongtu’s use of negative space, cutouts and silhouettes to address the dualities of presence/absence and openness/closed-ness in his work. Museum educators to make your own collages using cutouts. 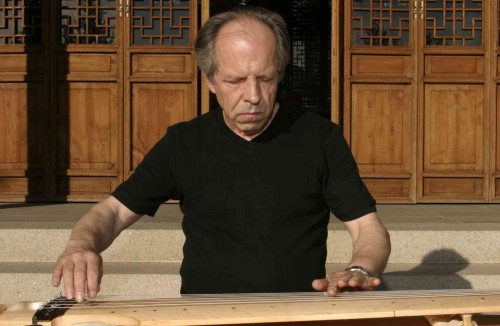 3pm: Performance & Talk by guqin player Stephen Dydo. He will talk about nothing–that is, the space between the lines in art, the space between the notes in music, the music of silence, and the way this is part of an ancient Chinese philosophy of the interconnectedness of all things. He will also demonstrate with music of the guqin, an ancient instrument of the educated, and with calligraphy.

Stephen Dydo composes for a wide variety of media, including chamber, orchestral, choral and electronic pieces. Much of his recent work has been involved with ancient music; as a teacher and performer of Chinese guqin, he is involved with preserving some of the world’s oldest music. He was president of the New York Qin Society for 10 years.