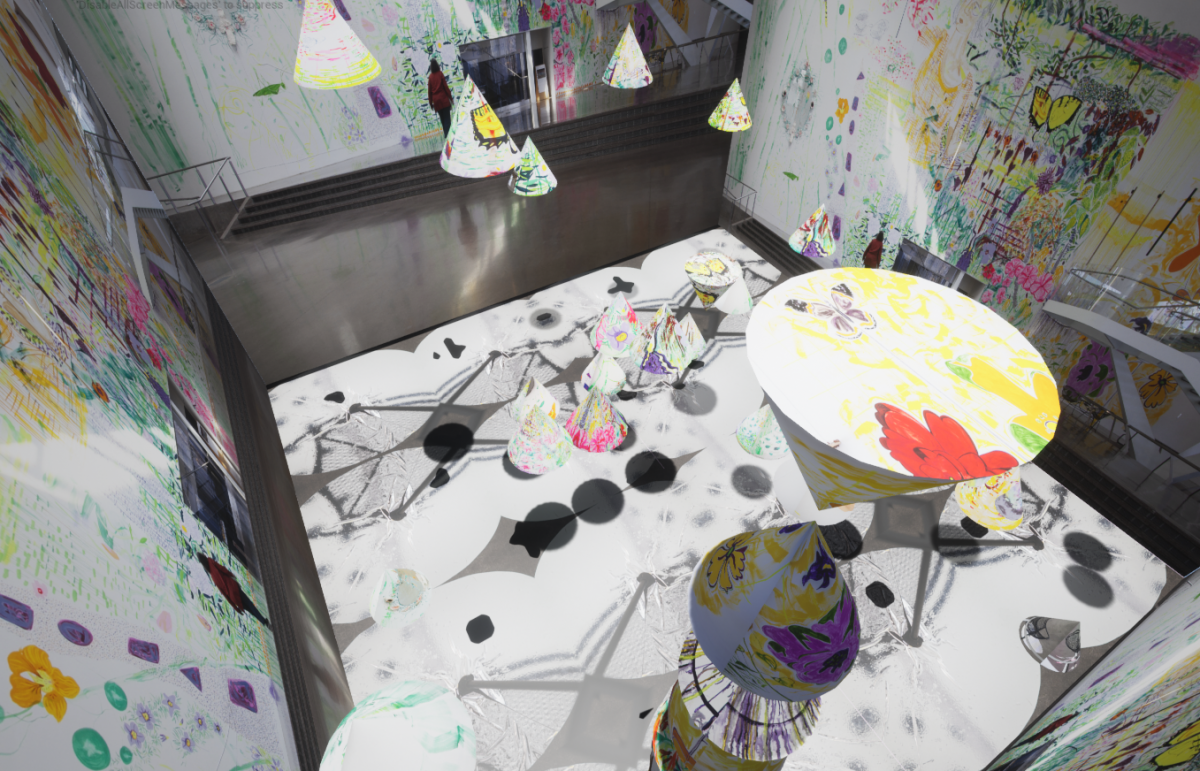 Join us for a special event in celebration of the closing of Relative Fields in a Garden on the Queens Museum’s 140-foot-long Large Wall including an interactive virtual project and artist talk. Relative Fields in a Garden combines painter Heidi Howard’s vivid gestural painting with her mother Liz Phillips’ interactive soundwork, which uses wave transmissions that respond to the natural light of the museum’s atrium.

The project is featured in the current issue of Precog Magazine, a publication that explores the intersections between art, technology, and feminism. For the issue, titled Bubble Orchestra, artists were asked to contribute submissions based on the concept and materiality of bubbles: as a metaphor for thinking through ideas of individuality and group cohesion; echo chambers and their tenuousness; algorithms; and the fragility of identity. The aim in bringing together this group of “bubbles” was to see how they sing together; what kind of cacophony or harmony is achieved in the proximity of these individual projects.

Precog is simultaneously launching a virtual exhibition of Bubble Orchestra consisting of an interactive space of different “bubbles” (contributions), made in collaboration with the Virtual Dream Center, an artist-run, downloadable, video-game based virtual exhibition platform that presents non-traditional methods of art-making and viewing led by Nicholas Steindorf and Jean-Baptiste Lenglet.

From 2:00-4:30pm visitors are invited to interact with Howard and Phillips’ contribution to Bubble Orchestra, Relative Fields in a VR Garden, at a game-station situated in the Museum’s atrium.

From 3:00-3:30pm Howard and Phillips will discuss the project with Nicholas Steindorf and Precog Magazine publisher Gaby Collins-Fernandez.

Copies of Precog Magazine will be available for purchase.

More about Precog and Bubble Orchestra
Precog Magazine is an independent, annual publication that explores the intersection between art, science, technology, cyber culture and feminism edited and published by Florencia Escudero, Gaby Collins-Fernandez, and Kellie Konapelsky. Precog’s mission is to provide an experimental print platform which gives artists agency while creating a conversation around relevant contemporary themes, focusing especially on the responses of women, queer artists, and artists of color.

Support for Relative Fields in a Garden, 2018 is provided by Agnes Gund. The Large Wall series at Queens Museum is supported by The Ferriday Fund Charitable Trust. Relative Fields in a Garden was commissioned in conjunction with the exhibition, Queens International 2018: Volumes (October 7, 2018 – February 24, 2019). QI 2018 is made possible in part by support from the National Endowment for the Arts and the American Chai Trust. Exhibitions at the Queens Museum receive significant support from Ford Foundation. Major funding for the Queens Museum is generously provided by the New York City Department of Cultural Affairs, the New York State Council on the Arts with the support of Governor Andrew M. Cuomo and the New York State Legislature, Lambent Foundation, Booth Ferris Foundation, and the Lily Auchincloss Foundation, Inc.