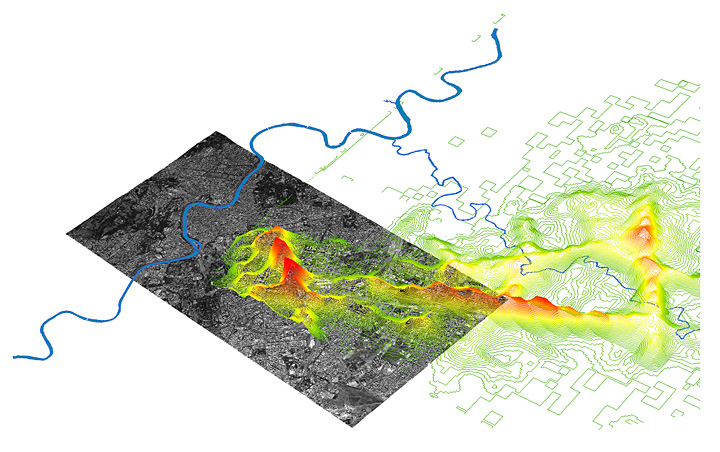 Map Mosaic: From Queens to the World
GISMO Exhibit and Forum

GISMO (NYC Geospatial Information Systems and Mapping Organization) is a forum for sharing information about geospatial technologies and related issues. GISMO was founded in 1990 and is the oldest, continually operating, NYC-based geographic information systems organization. GISMO is user-oriented and run on a completely volunteer basis by its members who come from many NYC agencies, universities, and public and private organizations. GISMO provides significant networking and professional development opportunities to its members. Learn more at gismonyc.org.

On the weekend of October 29-30, 2016, GISMO will be showcasing an exhibit entitled “Map Mosaic: From Queens to the World” at the Queens Museum.

Cartography is an art which complements the science of Geography. Good mapmaking helps us visualize the spatial dimension of resources, different distributions and problems. Geographic Information Science, GIS, (computerized cartography) developed technologically over the last 40 years and enabled the rapid production of diverse maps from digital data. Practitioners of GIS grew rapidly in numbers after the first PC GIS software was introduced in 1987. In 1990, GISMO was established in NYC assembling diverse users of the software to exchange expertise, share data, and lobby for common base maps and open data sources.

The cooperation fostered in GISMO led to the production of myriad maps of Queens, NYC and the NYC metropolitan area. GIS maps have flourished elsewhere as well. Many are visually compelling. Others illustrate contemporary problems such as flood-prone zones. Still others highlight remarkable features of Queens such as the great diversity of language, religion and food that makes the borough special.

One goal of this exhibit would be to impress upon the public the importance of GIS technology. Some young people may be inspired enough to add GIS training to their academic pursuits; jobs requiring these skills are plentiful. GISMO is also seeking to expand its membership to further promote continued cooperation among local mapmakers.

During the exhibit, maps will be displayed as a rotating and repeating slide show on the wall of the Unisphere Gallery. Other paper maps will be mounted on easels or the walls of the gallery. Visitors will also have an opportunity to manipulate interactive maps on PCs. Using publicly accessible software, visitors will be able to perform simple GIS mapmaking tasks. Additionally, presentations in the Museum theater will include: What is GIS?; GIS & Careers; GIS & Design;  Queens Geo Trivia; A Jackson Heights website with maps; GIS, Drones, and 3D; and Everyone Can Map It!

1:00 – 1:30 pm: Keynote – “What is GIS?” presented by George Davis, Geoweb3d
A history of the use of GIS geared towards NYC and present some of the new GIS-related technologies along the way. (Visualization, 3D Models, Aerial and Satellite Photography)

3:15 – 4:00 pm Map Design Panel
• “Storytelling with Maps and Design” presented by Jessie Braden, Pratt Institute Spatial Analysis and Visualization Initiative
Why are maps so powerful and universally revered? This presentation will explore how maps allow for impactful storytelling and how much design plays into creating compelling visuals. You will also learn how to spot the most common errors in mapping; giving you a critical eye as you view the daily deluge of maps on the web in journalism, blogs and reports.
• “The Territory of the Map: Cartography and the Problem of Information” presented by Joe Sokohl, Regular Joe Consulting, LLC
We’ve accepted the metaphor of map-as-information-guide for decades now. Kahn & Lent published Mapping Web Sites 15 years ago. Yet we never seem to engage with what a map does, how a map conveys meaning, and why choices in designing with a map in mind helps users. This talk looks at cartography in se as well as its analogy to information spaces of non-physical but no less real existence. Expect rants on weather and traffic maps as well as the lack of abstraction where abstraction should exist. Come to this talk for inspiration and Baudrillardian analogies.

1:00 – 1:30 pm: Presentation – “GIS, Drones, and 3D” presented by Dave LaShell and Patrick Gahagan, ESRI
NYC  is a leader in new advancements in GIS technology, including their use of drones and 3D. Case study of NYC Finance Department’s use of GIS and 3D buildings for property valuations and line of sight/viewshed analysis will be presented.

1:30 – 2:00 pm: Presentation – “Mapping Jackson Heights — From Farm to Cosmopolitan Neighborhood” presented by Thomas Lowenhaupt, Connecting.nyc Inc.
How might drawing upon the historic map collection of the New York Public Library and today’s layered maps benefit the Jackson Heights neighborhood and the new JacksonHeights.nyc, set for activation in early 2017?

2:00 – 2:30 pm: Presentation – “Queens Watersheds; Mapping ongoing sources of water pollution to Flushing Bay and Flushing Creek” presented by Korin Tangtrakul, Open Sewer Atlas NYC
Every year, between 20 and 30 billion gallons of combined sewage and stormwater enter New York City waterways. Many residents don’t know about the combined sewer system that allows this to happen, let alone where this pollution enters the waterways. Open Sewer Atlas NYC was founded to spread awareness about this issue, and develop maps to help communicate it. The latest map in the Open Sewer Atlas NYC series focuses on the watersheds of Flushing Bay and Flushing Creek, which receive roughly 3 billion gallons of sewage and stormwater pollution a year.

3:00 – 4:00 pm Competition – “Queens Geo Trivia” presented by Jack Eichenbaum,  Queens Borough Historian.  Trivia on anything related to the geography of Queens.  Prizes to be awarded to competitors who pay a $5 entry fee. Non-competitors are welcome to attend.

Feel free to bring your family and friends to the Museum for a maptastic weekend! We look forward to seeing you there.