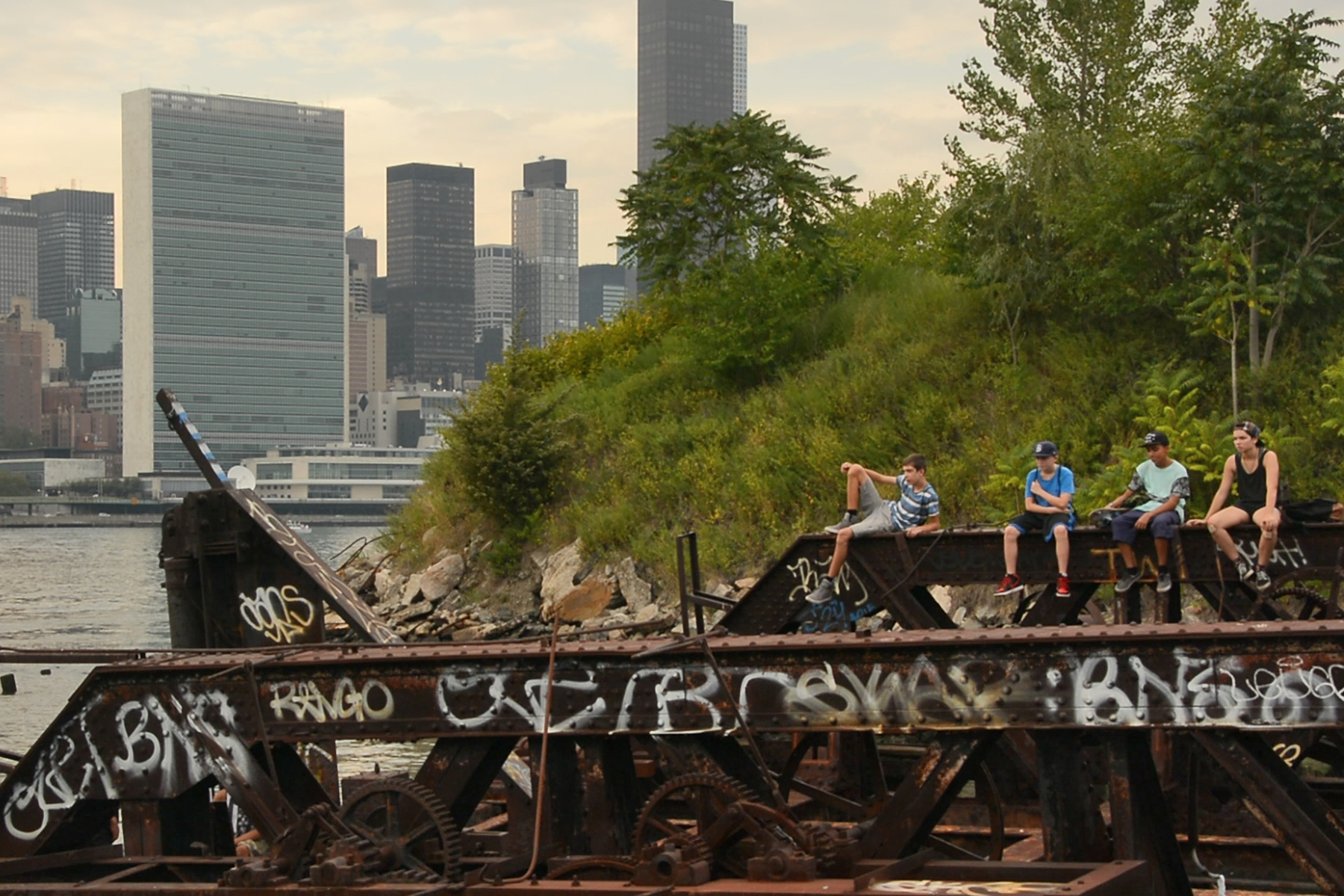 A tradition since 2001, Queens International is the biannual exhibition of artists living and/or working in Queens, presenting the artistic vibrancy of the borough though contemporary cultural productions in all media. While featuring a breadth of local artists, the 2016 edition will also check in on the role of the “international” in the borough’s artistic practice through cross-cultural/-national collaborations between Queens artists and their partners outside the US.

As part of the accompanying programming for Queens International 2016, we created “A Frame Apart” to highlight recent short films made in or about Queens. There are over 118 nationalities and cultural groups living in Queens. Many are recent immigrants while others have been here for several generations.  There are stories from around the world on its streets – some visible to the casual visitor, others unfolding more discreetly. Queens is both a muse and a battleground, simultaneously a node connecting world cities and a patchwork of insular neighborhoods. Access to digital filmmaking tools in everyday smartphones and the ability to share time-based media across multiple online platforms have given rise to numerous documentaries on the complex and fast-evolving cultural phenomena of this borough, as well as playful experimentations with forms and genres that come with the meeting of disparate cultures. With “A Frame Apart” the Queens Museum will showcase these singular visions, which are at once intimately local and inexorably intertwined with the tumultuous forces of global capital.

The video program will be incorporated in to the opening celebration of Queens International 2016 on April 10th as a looped presentation as well as screened more formally at the exhibition closing day July 31, 2016 followed by discussion with some of the participating filmmakers/artists. 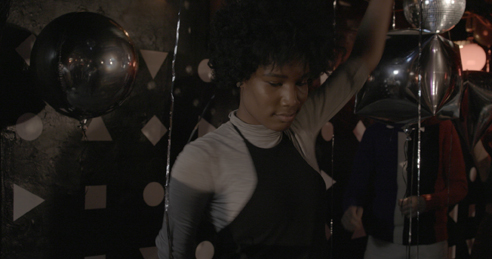 Film Still Discovery of the Shape by Carmelle Safdie

This video presents a staged dance party in which the artist’s friends perform various roles in a nightclub scene. The footage was filmed at Downstairs 87, where Safdie reimagined the venue’s basement level bar as part of an artist residency program. Condensed into a three-minute burst of music, geometry, and partygoers at play, Discovery of The Shape details the multifaceted components of Safdie’s installation, while showcasing the interactive, social, and ephemeral aspects of the project.

Carmelle Safdie is a Queens-based artist and musician who has shown her work and performed internationally. In New York City she has exhibited and presented projects at Sikkema Jenkins and Co., The Queens Museum, Soloway Gallery, Momenta Art, Printed Matter, MoMA PS1, Recess, and La MaMa La Galleria. Residencies include: MacDowell Colony, Yaddo, The Josef and Anni Albers Foundation, The Shandaken Project, and Andrea Zittel’s Wagon Station Encampment. Safdie has collaborated with numerous bands and performers for over a decade. Newly formed Carmelle and the Intro Factory provide the soundtrack for this video. Safdie holds a BFA from Cooper Union and an MFA in Painting from Bard College. 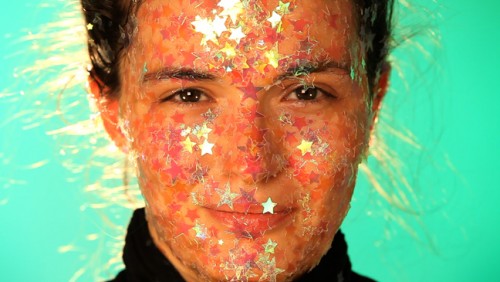 An absurdist take on the hero’s journey, in which Arnaut plays the role of an artist in pursuit of inspiration. At once emboldened and tormented by her own creative ambition, her artistic and cinematic predecessors, and even by her DP, she careens through a cavalcade of cultural influences before erupting in a deceptively charming slapstick routine. 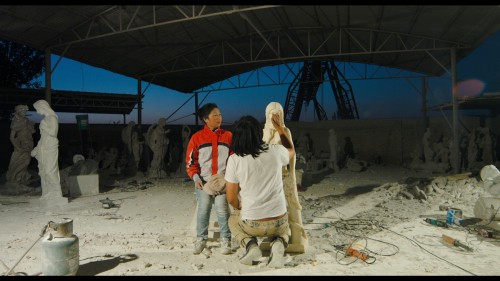 Quyang, on the outskirts of Beijing, is famous for its manufacture of stone carving. Replicas of classical western statues are mass-produced here before being shipped and sold all over the world. Wang sculpted two abandoned commercial sculpture replicas, Eve and David, into two anonymous workers from local sculpture factories. Natural materials such as stones, through the touch of human hands, were transmuted into magnificent statues; then these statues in the style of classical western tradition were transformed by Xu Wang into the appearance of anonymous Chinese factory workers, before they were shipped to US as conceptual art pieces. The film questions the boundaries between craft and art, physical labor and spiritual pursuit, anonymity and fame, local and global. These two marble statues embody these conflicts, where the cultural, political, economic, and artistic conditions of China at this particular historical moment are merged.

Xu Wang  lives and works in China and Queens, New York. He received his MFA from Columbia University and BFA from the China Central Academy of Fine Arts. His work has since crossed multiple mediums within art, including drawing, painting, sculpture, performance and video. He has exhibited internationally including exhibitions at the Inside-out art museum in Beijing and the SculptureCenter in New York.

The first chapter in an ongoing documentation of the transformation of Hunter’s Point South, Queens, the film captures the final season of its unique post-industrial landscape, where 30 acres of land had been left abandoned by the city, becoming an overgrown simulacrum of nature. Hidden in the brush, artifacts and debris hint at its history as a landfill, where marshlands were covered with rubble to create grounds for successive waves of industry. In the summer of 2015, the arts group Chance Ecologies invited 20 international artists to explore, celebrate and commemorate this unique space, before its impending demolition. Their actions included an archaeological dig, site specific sculptural installations, and the creation of a seed library, cataloging the many plant species that called this place home. The wilderness of Hunter’s Point is now gone, to be replaced with apartment towers and a more formal parkland, but the work of Chance Ecologies continues, and will be exhibited at the Queens Museum in the Fall of 2016.

Nate Dorr & Nathan Kensinger have been documenting the evolution of New York City’s post-industrial waterfront for the past decade, through photographs, films, installations, and curation. Both artists are based in Brooklyn, New York, and their work has been exhibited at numerous film festivals and galleries. Both have exhibited their photographs at the Brooklyn Museum, and Kensinger has also exhibited work at the Museum of the City of New York and Museum of Contemporary African Diasporan Arts. Their prior films have screened at the Slamdance Film Festival, Rooftop Films, Black Maria, and Boston Underground. Dorr is currently the curator of Imagine Science Films, a New York film festival and international screening series. Kensinger is the co-curator of Chance Ecologies, a Queens-based art project exploring the importance of wilderness in post-industrial spaces. 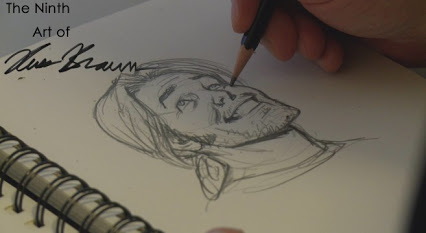 Russ Braun has been in the industry of comics for 25 years. This Queens-based artist has worked for the major editorial houses, such as DC and Marvel, illustrating a diverse set of characters that includes iconic figures such as Batman and the Justice League. In this film we get to know his way of working, influences, and his view on the art of comics.

Fernando Venegas Traba was born in Punta Arenas, Chile in 1981. His work as a filmmaker is centered on social issues and art. In NYC he has worked on several projects, including a collaboration with the Ballet Hispánico Dance Company. In 2014 he won a Fulbright Scholarship that allowed him to pursue a Masters in Social Documentary Film at the School of Visual Arts in NYC. He is currently working in a film centered on female breakdancers and teaches at the University of Concepcion, Chile. 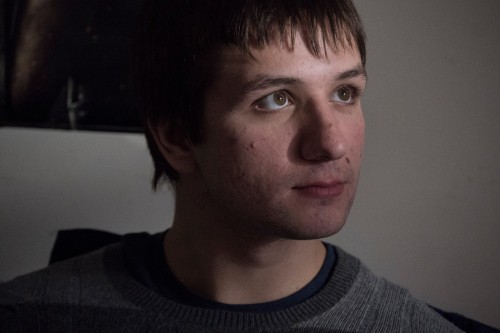 A narrative short film about teenagers living in contemporary Jamaica, Queens. Eric is a teenage boy, who gets involved in his school play to get closer to Rachel. When finally invited to her apartment to rehearse, Eric thinks this is a perfect opportunity for him to share his feelings. But will Eric have the nerve to act? Act Zero is a realistic look at the fear of rejection through the eyes of modern-day New York teens.

Thomas Rivera Montes is a New York City-based filmmaker, producer, and freelance editor. Born and raised in Lausanne, Switzerland, he graduated in May 2015 from Brooklyn College with a BA in Film Production. The same year, he directed Iria, a documentary about an abstract painter living in New York, and the short film Act Zero, a coming-of-age story about a boy, who tries to share his feelings with his classmate Rachel. which won the award for Best Directing at the 33rd Brooklyn College Film Festival and was screened at the Young Filmmakers Festival. Thomas Rivera Montes is developing his new short film, which tells the story of a group of teenagers living in New York, while working as an editor on narrative short films and documentaries.