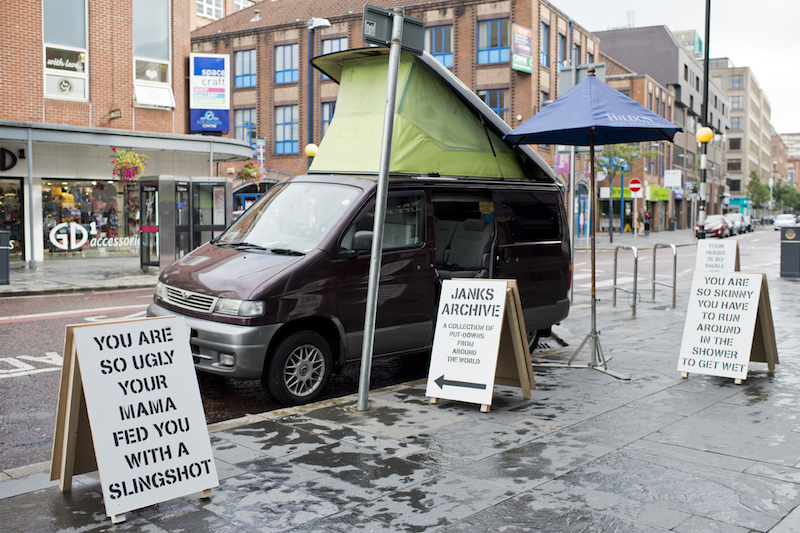 Janks Archive conducts an investigation of insult humor—an ancient oral tradition—from cultures around the world. While intentions appear, at first, to be cruel, “janks” are in fact an integral aspect of human interaction, used as much to strengthen camaraderie as to establish dominance. The project documents this tradition through crowdsourcing and field recording, in which participants recite “janks” from memory and the collective gathers contextual information in an attempt to trace origins.
They have recorded people telling “janks” on video in 10 cities in 7 countries, and will be interviewing Queens residents as part of the Queens International 2016. Look out for their insulting sandwich boards in Corona Plaza on April 30th and in Flushing Meadows Corona Park on June 4th!
janks \‘jaŋkz\ n, pl, slang [Alabama]
Jokes intended to directly insult the recipient by attacking personal attributes, often leading to verbal sparring
Synonyms:
Snaps, disses, slams, burns, jibes, digs, cut-downs, rippins, slaggings
Examples:
“I’ll cut you down so low, you’ll have to hold a sign that says ‘don’t spit, can’t swim'” (Alabama)
“You’re about as useful as a chocolate teapot” (Belfast)
“Your face looks like the ass of a bird of prey” (Finland)
Part of Queens International 2016