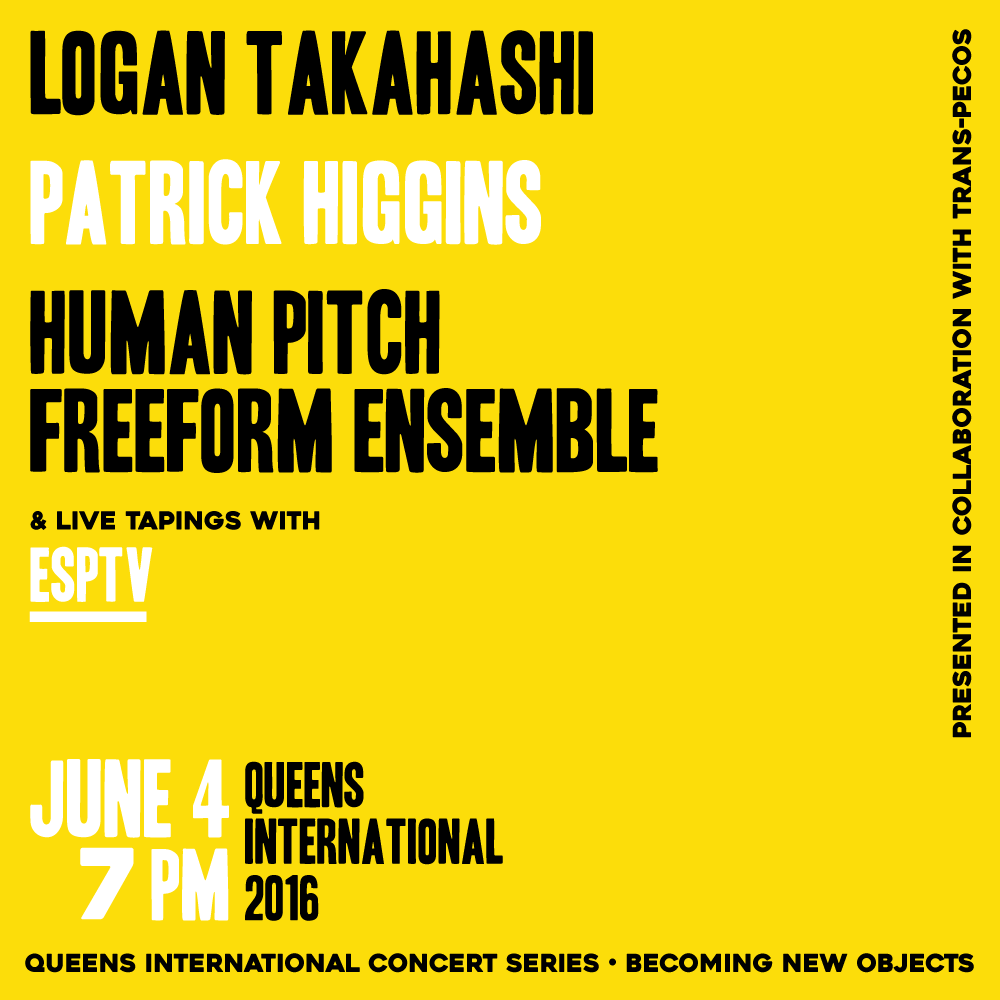 As part of the Museum’s biennial celebration of the borough, Queens International 2016, the Queens Museum is partnering with Ridgewood venue Trans-Pecos to present Becoming New Objects, a series of concerts and experimental music events. The program features a broad range of emerging and established performers whose work engages with the notion of “possible futures.” The events will feature surprising pairings that challenge distinctions between genres, media, and communities.

Like many classically trained musicians, Logan Takahashi didn’t take the techniques he learned at Oberlin Conservatory as gospel. He bent them until they broke, then reshaped all those errant rhythms, melodies, and timbres into an entirely new language while developing widescreen dance tracks in the Brooklyn duo Teengirl Fantasy. Over the past seven years, Takahashi and his former college-mate/fellow producer (Nick Weiss) have released acclaimed records on labels such as True Panther Sounds and R&S, collaborated with Kelela, Laurel Halo, and Panda Bear, and scored a Blade Runner-inspired Fashion Week collection for Opening Ceremony. Takahashi just finished his first solo album, NoGeo.

Described by The New Yorker magazine as one of the “prime movers of the local avant-garde”, and an “exacting avant-classical guitarist” by TimeOut NY, Patrick Higgins is a New York based composer/performer of experimental music. Higgins has composed works for some of the nation’s leading ensembles, ranging from chamber orchestra works, percussion cycles, and string quartets to smaller ensembles and soloists. He has scored works for television, museum exhibitions, and films both short-form and feature-length. Higgins plays guitar and composes in ZS, hailed by the New York Times as “one of the strongest avant-garde bands in New York.” As a soloist, he performs both classical acoustic and electric guitar in genre-bending contexts, utilizing extended technique and electronic processing.

For Becoming New Objects, experimental electronic label and event series Human Pitch brings its multi-instrumental dance and ambient music into ensemble formation. Label co-founder and producer Rioux, together with labelmates Dadras and Headaches, will perform as the Human Pitch Freeform Ensemble to generate a completely improvisational, electronic performance that will serve to transfix listeners in rhythmic yet cerebral fashion, blurring boundaries of genre and challenging the definition of the musical instrument by merging computer, guitar, live sampling, and drum machines into one living and breathing symbiotic performance.

E.S.P. TV hybridizes technologies old and new, contemporary and obsolete, to realize the live television studio as a site for performance-based works. Directed by Scott Kiernan and Victoria Keddie, E.S.P. TV utilizes a mobile television studio to explore transmission, analog and digital media, and broadcast. Through an ongoing series of live television taping events, they place the control room of the TV studio on center stage, making the means of production into a vehicle for performance. E.S.P. TV investigates the language of television through their practice and have built a strong network through artist collaborations. From this ongoing effort, they have amassed an extensive archive detailing these unique explorations of performance, sound, and vision. E.S.P. TV has held over 80 live taping events internationally and has aired over 95 episodes to date. In addition to live tapings and screenings, they have initiated the TUBE Archive as a means for republishing works and ephemera from early artist-based engagements with broadcast media. In Fall 2014, E.S.P. TV built a mobile broadcast van and in April 2015, they toured across the United States in partnership with organizations and artists across the nation.