The first monthly program dedicated to the discussion and exploration of various themes in Live Art, starts the new year with an event focusing on “Performance & Sound.” After spending several weeks presenting works and initiatives  in South America, Hector Canonge resumes the presentation of the monthly performance art conversation series” at the Queens Museum on Saturday, January 30th.

TALKaCTIVE premiered at the Queens Museum in September 2015. Following last year’s successful presentations, the independent initiative returns this month to the museum to continue with more topics in relation to Performance Art. For January, TALKaCTIVE will explore the theme of “Performance & Sound.”  The presentations, conversation and panel discussion includes the participation of invited artists whose work explore, experiment, with live music while creating and maintaining a close relation with Performance Art. Invited artists have created their own style(s), approaches, and compositions to the performative experimenting with forms, techniques, technologies, and diverse sound narratives.

TALKaCTIVE: perfomance art conversation series- is a new program that fosters dialogue and exchange among Live Action Art practitioners, encourages commentary about Performance Art, and prompts reflection about performative processes, methodologies, and styles. Every session is organized around a relevant topic in Performance Art, and the presentation of works by a group of selected artists who share their work, discuss their approach to Live Art, and engage in open conversation with critics, curators, and attending audience. The monthly series consists of a presentation, panel, and open Q&A session where participating artists screen documentation of their work, a curator or critic contextualizes the works presented, and a moderator mediates the exchange of information and resources.TALKaCTIVE is an independent initiative created and organized by artist Hector Canonge. Hosted at the Queens Museum, the monthly series is free of charge and open to the general public. 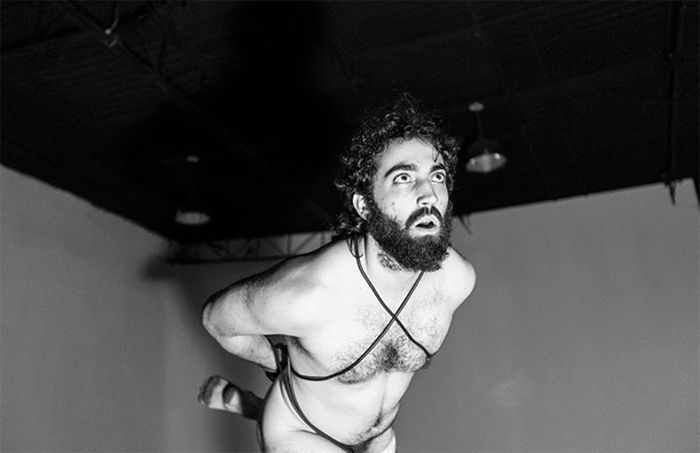 Alex Romania is a multidisciplinary performance-maker, organizer, and teacher based in NYC who shown work nationally and internationally. Besides creating performance work, Alex organizes events with dance and performance artists in NYC (such as the upcoming Get Your A$$ in CLA$$ class series at Abrons Arts Center coming this Spring 2016), holding irregular discussions and events through his collective journalism platform INVISIBLE ARTISTS (a resource to approach sustainability in the arts), teaching teens how to devise original performance, video-documenting live performance, and practicing Thai Yoga. Romania has performed in works by artist like Kathy Westwater, Catherine Galasso, Andy de Grout, De Facto Dance, and Eddie Peake among others. He has also collaborated with a handful of performance art collectives and performance artists. 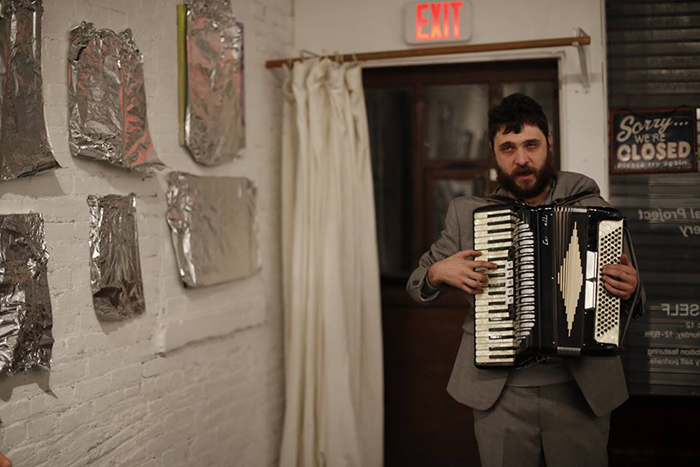 Brian McCorkle is a composer, musician, and performer. In addition to his work with the composer’s collective Varispeed, he is the Co-Director of the Panoply Performance Laboratory (PPL) with Esther Neff. PPL makes large scale performance art operas in addition to duo and small group performances around the world. PPL also operates a space for experimental music and performance in Williamsburg, Brooklyn. PPL is currently developing a new piece, Embarrassed of the Whole. 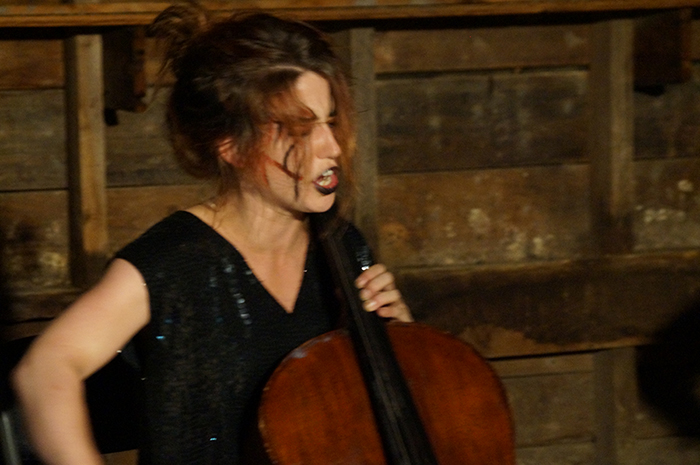 Valerie Kuehne is a cross-pollinated artist who fuses together music, performance art, narrative, and experimental curation. After moving to New York to study Philosophy at The New School, Kuehne travel extensively performing in as many unexpected settings as possible, and building a community for experimental music and performance art in New York. Her series, The Super Coda, is an experimental cabaret that has united electrifying performers 7 years running. Kuehne’s work operates under principles of surprise, and investigates obsession, comedy, decay, forensic pathology, sex, hypnogogia, viscera, spirituality & death. She is one half of the duo Naked Roots Conducive, one third of the trio Prehistoric Horse, and a histrionic version of herself. She has worked as a resident artist/curator at Panoply Performance Laboratory, Spectrum, JACK, Small Beast and Ange Noir. Kuehne operates a blog of music reviews and performance philosophy (www.thesupercoda.com) and frequently releases albums that blur the line between comfort and discomfort (www.dreamzoo.bandcamp.com). She has performed and helped curate many festivals, including bipaf, the brooklyn experimental song carnival, the mpa-b, the hitparaden international festtival for performance kunst, the experiMENTAL festival, Sonic Circuits, jazzPeru, and the Boise Creative & Experimental music festival, to name a few. Kuehne is also the creator/curator of Trauma Salon, a monthly gathering of performers/musicians/artists as a platform for artists to collectively and individually process trauma or, if necessary, create it. She is an advocate for mental illness and addiction, incessantly seeking new ways to break down stigma and misconceptions about both. 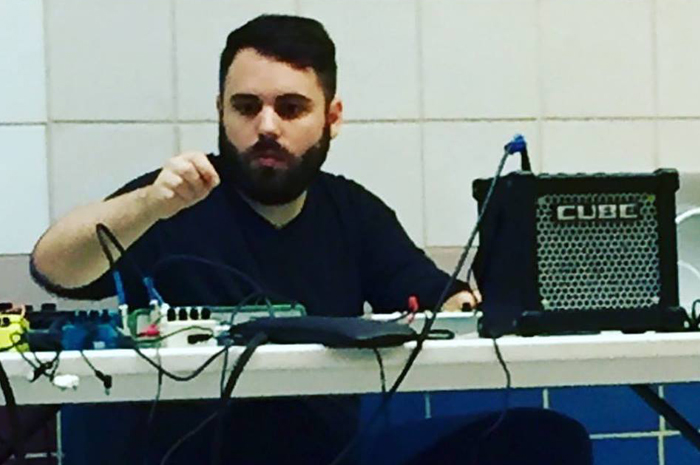 Gregory Paul is a sound artist living in Brooklyn. He creates ambient and rhythmic sonic textures that imitate everyday sounds to create environments that are both familiar and foreign to the listener. Noise and repetition in our own human nature draws us into the sonic world and unravels a narrative that can be experienced on its own or with a visual embodiment. 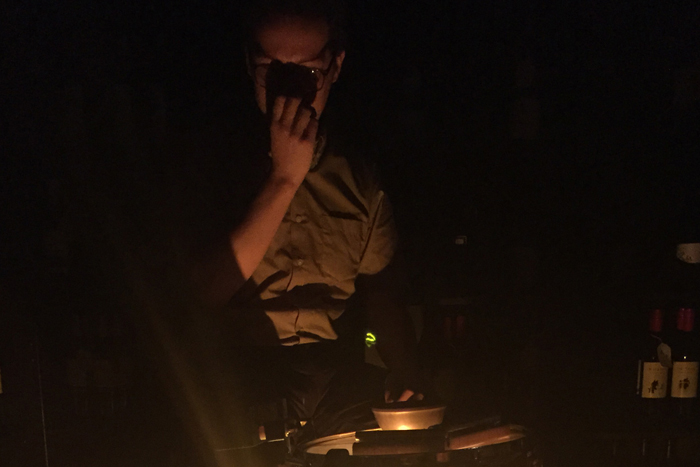 Cory Bracken attended SUNY Purchase College where he studied with Dr. Dominic Donato, Tomas Kolor, and Ted Piltzecker.  In 2008 he moved to New York City and enrolled in Brooklyn College to study with Frank Cassara, Matt Ward, and Ursula Oppens. He received a Presidential Scholarship, “Award for Outstanding Accomplishments in Music Performance,” the Robert Starer Award for performing works of living composers, and the distinguished Brooklyn College Alumni Association award for outstanding contributions to the music community. His work has been presented widely in various venues and programs in the city.

Hector Canonge is an interdisciplinary artist, curator, media educator and cultural entrepreneur based in New York City. His work incorporates the use of new media technologies, cinematic narratives, Live Action Art, and Social Practice to explore and treat issues related to constructions of identity, gender roles, psychogeography, and the politics of migration. He has exhibited and presented broadly in the United States, Latin America, Europe and Asia. As cultural entrepreneur, Canonge started projects such as ARTerial Performance Lab (APLAB), an initiative to foster collaboration among performance artists from the Americas, PERFORMEANDO, a program that focuses on featuring Hispanic performance artists living in the USA, NEXUSURNEXUS a virtual platform for Live Action Art, and PERFORMAXIS, an international residency program in collaboration with galleries and art spaces in Latin America. Canonge is the co-founder of QMAD, Queens Media Arts Development, a non-profit arts organization in Queens, NYC. As curator, he has organized exhibitions at Queens Museum, Space 37 Gallery, Visual AIDS, and the monthly artists’ program A-LAB Forum at Crossing Art Gallery. He created the monthly independent film series CINEMAROSA, and organizes the annual Performance Art Festival, ITINERANT. His work has been reviewed by The New York Times, ART FORUM, Art in America, New York Daily News, Manhattan Times, Hispanic Magazine; by major networks ABC, NBC, CNN, CBS, UNIVISION, etc., and online by Art Experience NYC, Hyperallergic, Turbulence, Art Card Review, NYRemezcla, and New York Foundation for the Arts’ bulletin NYFA News. After living in Europe and Latin America for over two years, Canonge returned to the USA in 2015 to continue with his projects, exhibitions, and presentations: TALKaCTIVE, performance art series (September – December 2015), CONVIVIR, international residency program (launched in October 2015), and ITINERANT, Performance Art Festival (November 12 – 21, 2015).