September’s program, “Transformations,” focuses and explores altered physicalities, atypical personas, and historical archetypes in relation to the colonized and socially gendered body. Participating artists have been invited to present new works for the season’s premiere event at the Queens Museum in New York City.

LiVEART.US was established as a platform to present and feature local, national, and international artists working in Live Action Art and its diverse manifestations.

LiVEART.US is a program that features works where the body, as main instrument for artistic creation and expression, is the catalyst for sensorial experiences, cultural interpretation, and critical reflection. LiVEART.US’ main objective is to further support the creation and presentation of new works in Live Action Art in an environment suitable for reflection and dialogue. LiVEART.US follows and complements the monthly program TALKaCTIVE: Performance Art Conversation Series initiated by Canonge in September 2014. 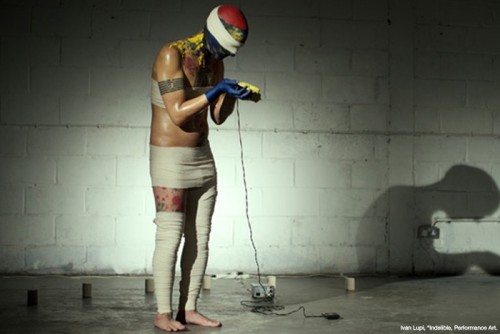 IVAN LUPI (Italy / United Kingdom) holds a Masters degree in Queer Studies in Arts and Culture from Birmingham University. He is a Research Fellow at the CFAR, Centre for Fine Arts and Research, Birmingham, since 2013. Since 2001 Lupi has been an active member of the collective Amae with which he has taken part in various collaborations and exhibitions in China, Italy, France, Germany, Switzerland, Lithuania, and the United Kingdom. His most recent works were presented at the Morni Hills Performance Art Biennale – Government Museum of Art (Chandigarh 2016), ‘The Slip of the tongue’ – Palazzo Grassi Punta della Dogana (Venice 2015), ‘The Voice and the Lens’ – Whitechapel Art Gallery (London 2014), among others. 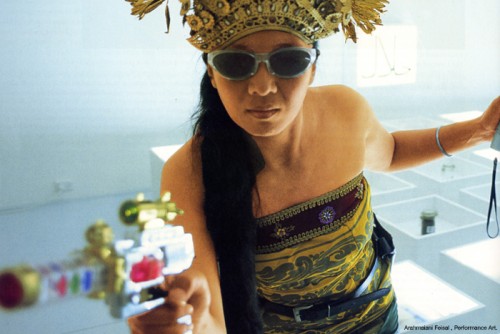 ARAHMAIANI FEISAL (Indonesia / Germany) is one of the leading figures in the contemporary art scene in Indonesia, working in performance, painting, drawing, installation, video, poetry, dance and music.  She was one of the artists in the Indonesia National Pavilion at the 50th Venice Biennale.  Her work has grappled with contemporary politics, violence, critique of capital, the female body and in recent years, her own identity, which although Muslim, still mediates between Islamic, Hindu, Buddhist, and animist beliefs.  She often uses her public presence in order to attract attention to violence against women in general and to female discrimination in Indonesia’s Islamic society, in particular.  Since September 11, she was combined her critical attitude toward Islam with a fight against its general stigmatization. And since 2010 she has been working with Tibetan monks in Tibet Plateau dealing with environmental issue 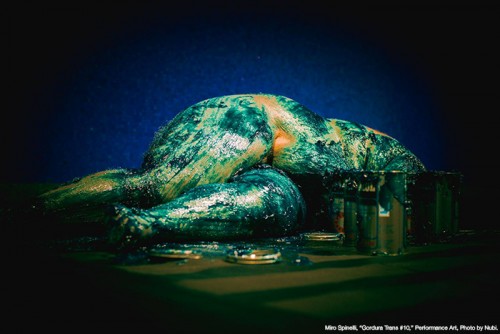 MIRO SPINELLI (Brazil) is a trans-media artist and researcher working in Rio de Janeiro and Curitiba, Brazil. They are mastering in Performance in UFRJ’s Arts of the Scene Post-Graduate Program and are a member of Água Viva Concentrado Artístico collective. At the moment their research focuses on performance art and how it unfolds in different medias. Their work deals with aspects of precariousness, abjection, monstrosity and transmasculinities, with special attention to the poetics and politics of the body. 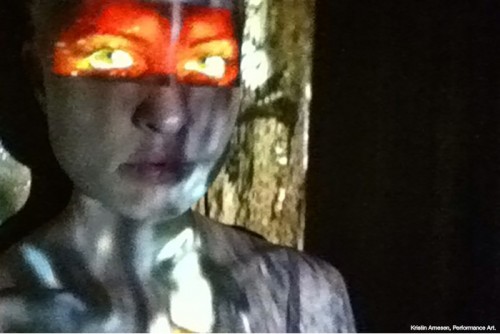 KRISTIN ARNESEN (United States) is an interdisciplinary artist and musician who creates magical and disorienting experiences with movement, sound, light and her own body. Her performances, video, sound, installation and sculptural works have been shown at Film Society of Lincoln Center, Brooklyn Museum, Philly Live Arts, Recession Arts, Trestle Gallery, Endless Chinatown, HERE Arts, Shapeshifter Lab, The Living Theatre, HomeBase Salon and tamtamArt (Berlin) and Muzeum Manggha (Krakow). Her publication with Endless Editions and Intra Faction is in collection at the MOMA PS1 Library, and her solo EP Violet Violet is set for release in November 2016.