LiVEART.US, Performance Art initiative created and organized by artist, and independent curator, Hector Canonge, begins its Fall 2018 season program with the special presentation of the program “Queerin’ Performance,” featuring the work of local and international artists.

This month’s program, inspired by the annual Queerin’ Queens event held at the museum during June Pride Month since 2005, is a celebration of Pride and Diversity through Performance Art. Selected artists will explore issues related to gender discourse and identity politics in an environment that welcomes creativity, reflection, and respect. 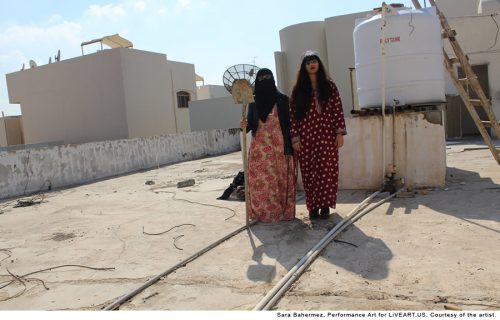 SARA BAHARMEZ is a Yemeni-Emirati experimental and multidisciplinary designer, director, performer and educator from Abu Dhabi, UAE. After graduating with a Bachelor of Arts from NYU Abu Dhabi, she moved to Baltimore to pursue an MFA in Theatre from Towson University as a Fulbright Scholar. Bahermez is currently based in Baltimore where she teaches as an Adjunct Professor at Stevenson University’s Theatre Department and Community College of Baltimore County’s Fine and Performing Arts Department. She is deeply dedicated to creating performance and constructing live images that work towards a queer Islamo-futuristic movement. Her recent works include Masjid Al-Munfaletat (The Mosque of Loose Women), an immersive theatre experience that follows the re-imaged lives of three ‘martyr’ women: Loujain Hathloul, Dina Ali Lasloom and Qandeel Baloch.

* Sara will perform “Munfaletat Manifesto: A Reading.” The work is a call to action in the form of a ‘performalecture’. Munfaletat is an arabic term used to describe an ‘othered’ femme, it carries connotations of looseness, immorality and fluidity. Using Arabic poetry and visual projections to dissect reclaimed social classifications, this manifesto seeks to understand the nature of being a queer and feminine body in the Arab World. 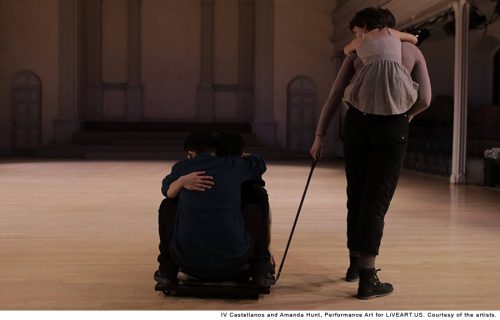 IV CASTELLANOS and AMANDA HUNT’s collaborative practice begins with each of their respective disciplinary backgrounds; Castellanos in sculpture and abstract performance art, Hunt in theater, dance, and performance art, to arrive at a place where they utilize all forms but ultimately stand between them. Their performances involve hand-made objects that over the course of the performance are destroyed with precision, manipulated to become something else, and/or are intercepted with their bodies. Castellanos and Hunt incorporate choreography that is rigorous and aesthetically nods to athleticism, labor, Queerness, and risk. They frame performance by setting up systems of logic that are strictly adhered to, whether or not this system pans out as a ‘success’ or ‘failure’ – what becomes more important is its tone of diligent attempt. By collaging multiple definitions of labor, the artists ask the viewer to reconsider seemingly disparate meanings of what it means to work, what it means to negotiate that work with another body, and what the idea of support looks like when inherent failure is embedded in a live action. AMANDA HUNT has shown solo work at Judson Church, AUNTS, PPL, Grace Exhibition Space, The Current Sessions, Segundo Piso (Puebla, MX), and more. Hunt has worked with Kira Alker and Elke Luyten, Sam Kim, and Kathy Westwater (2013-2017). IV CASTELLANOS is a current Anonymous Ensemble resident and has shown work at PPL, Grace Exhibition Space, Highways Performance Space (L.A.) and The Aha Festival (Santa Fe, NM). Founder of former IV Soldiers Gallery and the Feminist Art Group in collaboration with Esther Neff. Hunt and Castellanos are Brooklyn based and were Gibney Dance Center Work Up 3.2 recipients 2017 and Chez Bushwick AIRs 2018. 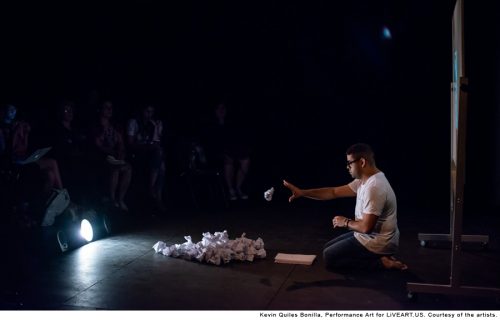 KEVIN QUILES BONILLA was born in San Juan, Puerto Rico. Graduate from Parsons, The New School of Design in New York City with an MFA in Fine Arts with Honors, and the University of Puerto Rico with a BA in Fine Arts magna cum laude. His artistic production has been presented in a solo show in Puerto Rico, as well as collective exhibitions in The United States, Mexico, China, Belgium, and Japan. He’s the recipient of a 2017 Emerging Artist Award from The Kennedy Center in Washington, DC. His most recent exhibitions include Westbeth Gallery, The 8th Floor Gallery and Itinerant Performance Art Festival 2018. He explores ideas around power, space, and history with his identity as context.

* Kevin will perform “A Study of Piles” .- A pile-up can be literal and conceptual, tangible and abstract, concrete and transmutable. The pile is a universal structure that transcends geographical, cultural and political barriers. What began as literal reasons as to why we pile up swiftly turned into more deep and conscious reasons that ultimately became a mirror of our own conditioning, taking as context particular moments in history alongside images from the recent aftermath and ramifications of Hurricane María in Puerto Rico. 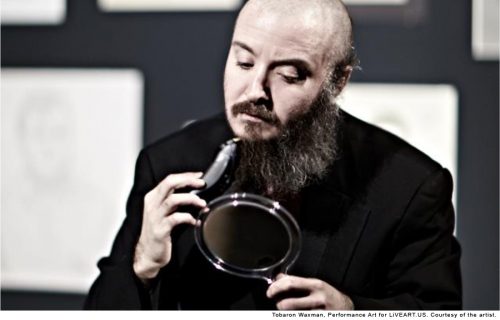 TOBARON WAXMAN is a visual artist who sings. Tobaron composes performances for photograph, video and site specific installation, and is also a trained vocalist in Jewish liturgical music. As a curator, Tobaron’s curatorial projects have included ‘Watch me Work:Women, Labour and Queer Economies” at BBK Köln, Germany; ‘Object Body: Unexpectedly Ecstatic’ at Studio Maya, Brooklyn: ‘Radical Drag/Transformative Performance’ in collaboration with Stefan St-Laurent at GalerieSAWGallery, Ottawa; and the internationally touring video program ‘Topographixx: Trans in the Landscape’. In 2013, Tobaron founded The Intergenerational LGBT Artist Residency, as a combined curatorial, relational/live art, and sociopolitical praxis. Since 2017 Tobaron has been Trans Archive Assistant at Canadian Lesbian and Gay Archives, part of a collaborative team creating the Trans Archive at the largest independent LGBTQ archive in the world. Tobaron has been exhibited at such venues as Palais de Tokio, Videotage Hong Kong, Kunsthalle Vienna, CEPA Buffalo, New Museum NYC, Leslie Lohman Museum of Gay and Lesbian Art, New Museum NYC and Brooklyn College Conservatory of Music. As a vocalist, Tobaron has sung liturgy in hospitals, at memorials and weddings; as well as performed at Kampnagel Festival of Choreography and Protest Hamburg, Kulturlabor ICI Berlin, Donau Festival, and Dixon Place NYC. Tobaron is currently developing a volume of artist interviews with international trans women artists, and more site-specific endurance performances for a cappella transsexual voice. In addition, Tobaron is a Research Collaborator of the Canadian Consortium for Performance and Politics in the Americas. Tobaron has taught live art, collaboration and vocal techniques at the Chinese University of Hong Kong, School of the Art Institute Chicago and at the Hollins MFA Dance Program, and has lectured at Parsons, SOAS University of London, Concordia University, OCADU, SMFA Boston, UC Irvine, Goldsmiths and others. 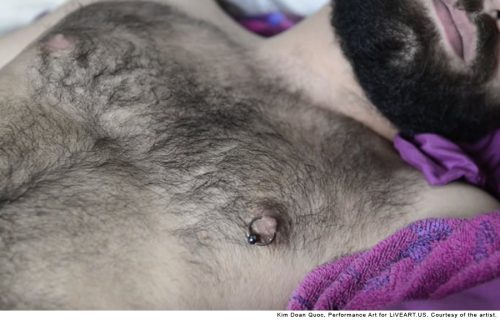 KIM DOAN QUOC is a French-born artist based in Budapest, Hungary and New York City, USA. Her works ranges from photography, video installations and projection mapping, to electronic experimentations and performance. Through contemplation of individuals regardless of their gender as sacred beings of our everyday space presented in her photography work and the poetic trangressions involved in her performances,  her body of works explores the boundaries of intimacy and sexuality. Her work as a visual and performance artist has been exhibited internationally in Budapest, Brussel, Paris, Berlin and NYC. This year, she collaborated with Diego Verastegui for the performance “Do you see me?” for SLANT performance series, curated by Lori Baldwin and Luiza Moraes in Trafo, Budapest and her fist solo exhibition CLUB D’AMOUR took place in Paris, curated by LAS VEGAS curators at Carbon 17. Kim is also an active Visual Jockey and has performed internationally in the electronic music scene in clubs as Grelle Forelle (Vienna, Austria), Terem (Budapest, Hungary), Dalston Superstore (London, UK) and Output (Brooklyn, NY, USA).

* Kim will perform Last Night, a work that explores objectification of people and gender normativity. Switching and mixing stereotypes of sexual behaviors with dark humor, the performance attempts to deconstruct the power balance indulged by gender normativity and the consumerist habits that parasitized human romantic and sexual affairs. The performance also involves photographs of the artist from the series Considering the boys. 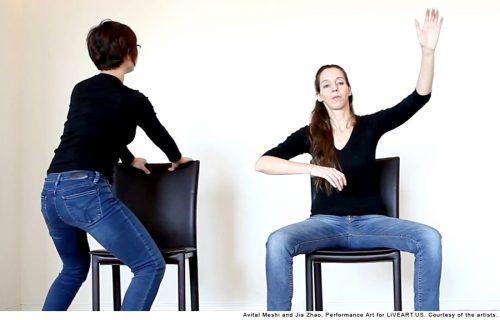 Avital is a new media artist, she holds a BFA from the School of the Art Institute of Chicago and she is currently studying for her MFA at the UC Santa-Cruz program for New Media and Digital Art. Avital’s practice focuses on the way people connect with one another through avatars in games and virtual worlds. She asks questions in regard to our virtual experiences and their ability to influence our life in the physical reality. Previous exhibitions include a solo show at the ‘Digital Art Demo Space’ in Chicago and group exhibitions in Woman Made Gallery in Chicago, Mana Contemporary in Chicago and R/SF projects and Root Division in San Francisco.

Jia holds a Master of Arts in art education from the School of the Art Institute of Chicago. She teaches art in the south side of Chicago. Her artistic work focuses on  the way people gather their knowledge based on their surrounding environment; they move their body, sense themselves and craft their identity according to the stimuli around them. Jia uses text and performance to explore notions of spontaneous responses of the body to the environment. She is also interested in forming connections with other people through performances both in real and virtual spaces using her own physical body and her avatar.

* Avital and Jia will perform “VR2RL,” a live performance in which two artists are inspired by meeting one another inside a virtual world. In the VR encounter, the artists embodied two female avatars who were sitting together on the same virtual chair. The bodies of these avatars moved according to a given animated script which is attached to the chair. Inspired by the movement of their avatars, the artists reenact the animated script in real life. 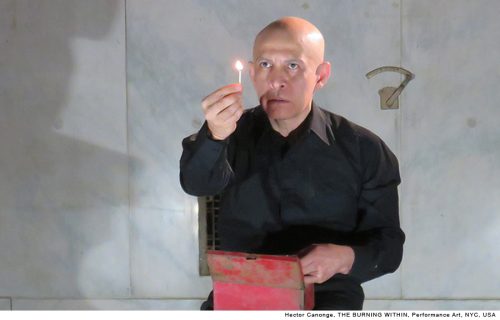 HECTOR CANONGE (Founder and director of LiVEART.US) is an interdisciplinary artist, independent curator, and cultural entrepreneur based in New York City. His work incorporates the use of new media technologies, cinematic narratives, Live Action Art, and Social Practice to explore and treat issues related to constructions of identity, gender roles, and the politics of migration. Challenging the white box settings of a gallery or a museum, or intervening directly in public spaces, his performances mediate movement, endurance, and ritualistic processes. Some of his actions and carefully choreographed performances involve collaborating with other artists and interacting with audiences. His installations, interactive platforms, and performance art work have been exhibited and presented in the United States, Latin America, Europe and Asia. As cultural entrepreneur, Canonge created and runs the annual Performance Art Festival, ITINERANT, started ARTerial Performance Lab (APLAB), an transcontinental initiative to foster collaboration among performance artists from the Americas, and directs his independent programs: PERFORMEANDO, a program that focuses on featuring Hispanic performance artists living in the United States and Europe, PERFORMAXIS, an international residency program in collaboration with galleries and art spaces in Latin America. After living most of his life in the United States, Canonge returned to South America in 2012, and lived abroad for almost 3 years. The artist returned to New York City in late 2015 to continue with the development and execution of new projects, exhibitions, and initiatives among them: TALKaCTIVE, LiVEART.US, and CONVIVIR the international residency program at MODULO 715. In 2017, Canonge organized the performance art platform, NEXUS, premiered during Miami Art Basel, and worked in the development of the first International Performance Art Festival of Santa Cruz de la Sierra, presented in January 2018 in Bolivia. The artist is currently at work in a project to be presented in Canada and Europe in the Summer of 2018.