Under the theme “Performing Masculinities,” this month’s LiVEART.US program focuses on explorations of what constitutes “maleness”, examinations of masculine constructions, and observations about “macho” attitudes in today’s society. Invited artists will present selected works through various modalities of Live Action Art. 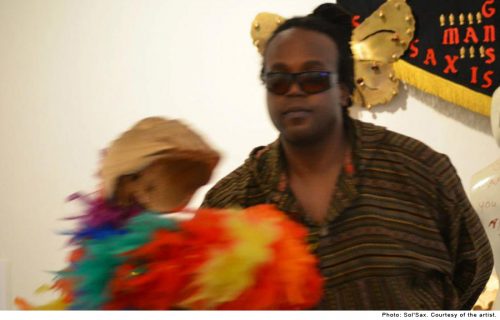 The Call Jah Sol=Jah Sol’Sax is A Free King, A Merry King of Kings County. In 1969 he was born to become Good God Almighty, Burning Bush Man of Bushwick. He was Tri-State educated in The Old School ways. He always matriculated with honors and earned The title: The All See Street Dreaded IllumiNatty, Yale’s Lock Jaw Warlock. Sol’Sax also holds Degrees from several Schools Of Hard Knocks including Bellevue and Rikers.  Sol’Sax has been seen breakdancing on MTV in 1984 and was a Party Crasher on The Cosby Show in 1987. In 1989 Sol’Sax studied Zen stone carving in Berlin. On the first day Sol’Sax visited East Berlin, The Berlin Wall Fell.  In 1991 Sol’Sax was initiated into The Mysteries of Traditional African Culture and has made art work that celebrates African Traditional Culture and it’s African American retentions till now. His work has been shown at well known venues and collected internationally. Danny Simmons of Rush Arts has said that Sol’Sax is the Greatest Artist of his Generation. 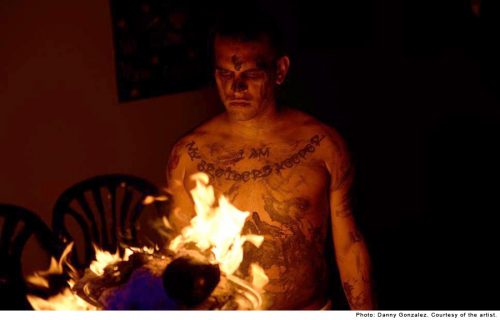 Danny Gonzalez is a multi-disciplinary artist from Oklahoma. In performance he attempts to communicate his fears, dreams, and expectation for society. Gonzales declares “Often times the emotions that come from life manifest themselves in the form of painful regrets to exuberant joys. To use these emotions and moments as fuel to communicate with the viewer, create a space of vulnerability and intimacy.” 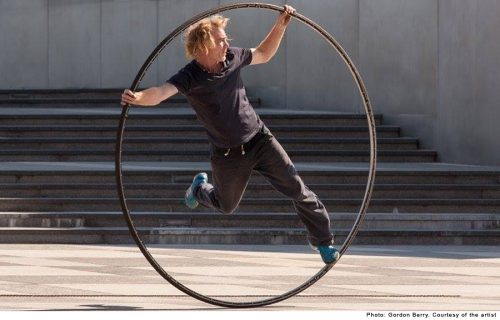 Gordon Berry is a Brooklyn based multidisciplinary artist best known for his work wrangling children and conspiring to chaos with wind, chickens, brains (golden)  and circus hoops.  His background includes linguistic gymnastics, linear programming, heuristic algorithms and balance. He channels (UN)planned interactions through the transformation of discarded objects and reused materials into fugacious forms and experiences. 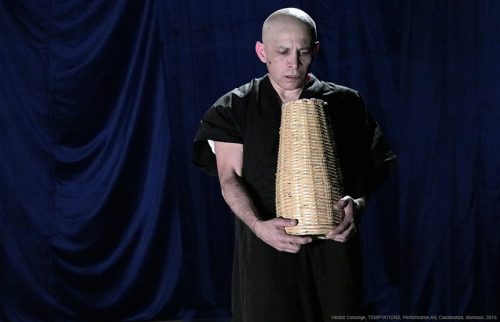 Hector Canonge (Founder and director of LiVEART.US) is an interdisciplinary artist, independent curator, and cultural entrepreneur based in New York City. His work incorporates the use of new media technologies, cinematic narratives, Live Action Art, and Social Practice to explore and treat issues related to constructions of identity, gender roles, and the politics of migration. Challenging the white box settings of a gallery or a museum, or intervening directly in public spaces, his performances mediate movement, endurance, and ritualistic processes. Some of his actions and carefully choreographed performances involve collaborating with other artists and interacting with audiences. His installations, interactive platforms, and performance art work have been exhibited and presented in the United States, Latin America, Europe and Asia.

As cultural entrepreneur, Canonge created and runs the annual Performance Art Festival of NYC, ITINERANT, started ARTerial Performance Lab (APLAB), a transcontinental initiative to foster collaboration among performance artists from the Americas, and directs his independent programs: PERFORMEANDO, a program that focuses on featuring Hispanic performance artists living in the United States and Europe, PERFORMAXIS, an international residency program in collaboration with galleries and art spaces in Latin America. . After living most of his life in the United States, Canonge returned to South America in 2012, and lived abroad for almost 3 years. The artist returned to New York City in late 2015 to continue with the development and execution of new projects, exhibitions, and initiatives among them: TALKaCTIVE, LiVEART.US, and CONVIVIR the international residency program at MODULO 715. In 2017, Canonge launched the performance art platform, NEXUS, premiered during Miami Art Basel, and worked in the development of LATITUDES, the International Performance Art Festival of Santa Cruz de la Sierra, presented in Bolivia (2018 and 2019). He is currently at work in the development of AUSTRAL, Performance Art Festival Buenos Aires (April 23-27) in Argentina, and ITINERANT Performance Art Festival NYC (May 22-27) in the United States.