The Ecuadorian Film Festival in New York brings some of the best and newest Ecuadorian movies to both the Ecuadorian community, and the Independent film aficionados in New York; opening a window into this diverse country, and inspiring people to have meaningful conversations while celebrating Ecuador and the magic of cinema. After two editions, EFFNY is back with a third edition, bringing Ecuadorian Cinema–for the very first time–to several locations outside New York City, including Long Island, Westchester and Rockland County. A total of 24 screenings have been programmed, among strategic venues in NYC and it’s surroundings. Visit ecuadorianfilmfest.com for information on all screenings.

Alexandra Cuesta quotes eternal wanderer, Henri Michaux as one of the inspirations of her first feature. It’s odd, then, that the opening sequence of Territorio (the first film Cuesta shot in her native Ecuador) shows a boat heading for the shore. It is very likely that, to Cuesta, the image of water hides the same connotation that it does to the author of “The Sea of Breasts:” returning home, being sheltered in the mother’s womb. Without detouring from the formal approaches of her previous work, Cuesta traces a journey that crosses the country from north to south. In so doing she draws a human cartography in which the aim is to achieve an impossible balance between the foreign traveler’s gaze and the earnest familiarity of those who return home temporarily. 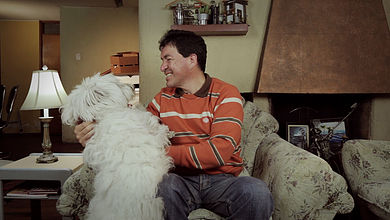 Moving from the house that has been his home for 20 years, presents Daniel to a harsh reality: he does not know who his neighbors that have surrounded him for so many years are. Now he will not leave without discovering his stories.

The Ecuadorian Film Festival in New York is produced in partnership with Brooklyn’s Syndicated Bar Theater Kitchen, and made possible thanks to the generous support of the Ministry of Culture of Ecuador and Telemundo 47. In addition, it is supported by the Queens Museum, Cinema Tropical, Café Velez, Santana, Hoja Verde, Botánica and jetBlue.