Kyoto, the imperial capital of Japan for over one thousand years, is not only famous for its interesting places but also its cultural depth. Many temples and shrines can be found in Kyoto, more than in the other cities of Japan, as well as many preserved Japanese buildings, and more people who still wear Kimonos. While it is a modern city, Kyoto retains the flavor of ancient Japan. Kyoto Culture is a unique one-day cultural and art event with three sections: Calligraphy; Music Performance; and Kimono and Handicraft Display. This one day program will provide you a great experience of Japanese culture and traditions.

Ai Takaoka’s calligraphy performance has been presented in many shrines in Kyoto. Her traditional Japanese calligraphy action is an elegant and powerful performance of living brushwork.

Sensui Oikawa represents the 4th generation of a family of calligraphers. Also a skilled player of the Okoto, a traditional Japanese instrument, she was featured in a concert at NHK Hall National Theater.

Emi Kikuchi will present kimonos and discuss the finer points of kimono wearing and fashion.

Yael “Kat” Acher-Modiano will play shakuhachi-inspired music on the Western flute (The shakuhachi is a traditional Japanese end-blown flute).

Ai Takaoka
Born in Kyoto prefecture. A female Kyoto calligrapher, she explains the path (way or michi) of traditional Japanese calligraphy as an elegant and powerful performance of living brushwork. Through the originality of her calligraphic technique, creativity, and ability to understand the feelings of others, Ai Takaoka offers energy and hope to enrich the spirit of people. For more than 30 years, she has built up her skill through continual practice which has given her exceptional technical strength. Bringing together tradition and innovation while expressing the full range of human emotions has developed her creative power; and through overcoming several illnesses she has developed a fighting spirit that helped her realize the power to empathize with others. Upon coming into contact with Ai Takaoka, many people have been moved to tears.

Pursuing this lifestyle, she received in 2008 the LUX Shine Award, a cultural prize for sparkling female artists that recognized her image as a strong and beautiful woman. In 2012, she was invited to Paris, France, where she gave a performance at her solo exhibition; thus beginning to attract foreign attention to the expression of Japanese beauty and spirit in her work as a calligrapher. Born in the northern part of Kyoto prefecture in the Tango region, she was named the tourist ambassador for Tango. As an expression of her love for her home district, she has made Kyoto the base of her activities. At the same time, she has opened her school, Shoraku room, where she not only teaches and transmits calligraphy but also acts as a therapist with more than 80 students.

For people who have lost confidence in themselves due to the stress and pressure of society, Ai Takaoka teaches that being as you are is good, and it is good to more fully express yourself. Her hobbies include running marathons and developing physical strength. Her belief in simultaneously training the body and the spirit is such that she has been called the athlete calligrapher. 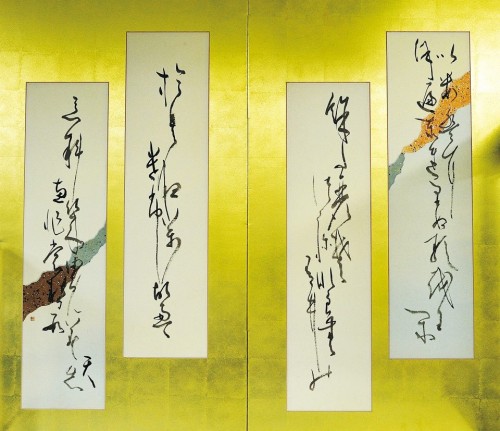 Oikawa represents the 4th generation of a family of calligraphers, a history which originated with her great grandfather, a calligrapher some 150 years ago towards the end of the Edo period in Japan. At four years of age, Oikawa started to learn calligraphy from her grandfather, Oikawa Habei. In 1967, when she was 16 years old, she earned her first award as a calligrapher, and subsequently she received many important awards for her Japanese calligraphy. Oikawa has been certified to teach calligraphy, and in 1972 opened a calligraphy school. In 1973, she also took up the Okoto, a traditional Japanese instrument, and played a concert at NHK Hall National Theater. Oikawa’s calligraphy was displayed as a Japanese national treasure, at the Bulgarian National Library, and was collected by the library along with the calligraphy of former Prime Minister, Shinsuke Kishi – (grandfather of the current Japanese Prime Minister, Shinzo Abe).

She has exhibited in Hong Kong, Paris (at the Salon du Dessin), Los Angeles, Zurich, Lublin (Poland), Metz (France), Honolulu, Seoul, Cairo, Prague, Vienna, Moscow, Tokyo, and many other places. Her art has been collected by various museums, including Taiwan National History Museum, Ethnographic Museum of the Republic Bulgaria, National Museum of Serbia in Belgrade, Ichikawa City Museum in Chiba Prefecture (Japan), Oriental museum German cairn, as well as by private collectors in Poland and in France

Yael Acher “Kat” Modiano
The shakuhachi is a Japanese end-blown flute. Originally introduced from China into Japan in the 6th century, it and underwent a resurgence in the early Edo Period. It was used by the monks of the Fuke school of Zen Buddhism in the practice of suizen (吹禅 blowing meditation). Acher-Modiano plays the modern Western flute, in the style of the shakuhachi. Acher-Modiano is an award winning Flutist, Composer, and Educator. She has participated in the following types of performances: Classical, Contemporary, Free-Improvisation, Progressive electro/instrumental Jazz, Free Jazz, Funky, Electronics, and live Electro/acoustic music for Silent Movies and choreography, in collaboration with ensembles, choirs, Modern Dance, Visual artists, DJs, MC Poets and Spoken Word Artists. Educated at Empire State College, New York University, and Hunter College, she studied at Rubin Academy for Music and Dance, in Jerusalem, Israel where she earned a Bachelor Degree in Classical Flute performance Arts.

Emi Kikuchi
A native of Japan, Kikuchi came to the U.S. in 1989. She is a certified Shihan (master) Kimono Teacher who can issue certificates from the institute in Japan. She studied at the Naganuma Shizu Kimono School, one of the top kimono schools in Japan. Kikuchi teaches classes in New York City on kimono dressing, proper setup, and appropriate fashion standards. In 2007, she established the “Kimono Experience” initiative in New York City, presenting the rich tradition of kimonos at various public events such as the Kimono Show at Queens Flushing Library in 2007, 2013 and 2016 and Yukata Show at the Japan Block Fair in 2013. Most recently, Kikuchi presented a kimono show at Japan Fest in Atlanta, Georgia, produced by the Consulate General of Japan in Atlanta in September 2016.

Akiko Tokuoka
Akiko is a Japanese dancer, actor, model and choreographer. She was featured in roles at Kennedy Center (D.C.)., Lincoln Center, Blue Note, Brooklyn Ballet, New York Fashion Week, and the off-broadway musical Heather Smiley for President. Akiko aspires to uplift and inspire her audience through the creation of multi-media pieces that combine her skills in acting, dancing and choreography.

Mami Inari
Inari is a model, and hair and makeup artist who was born and raised in Kyoto, Japan. She worked at a hair salon for 7 years and moved to New York in 2012. Imari gained experience doing fashion shows and wedding.

Alisa Kikuchi
Alisa Kikuchi was born and raised in New York. She has learned Japanese Classical Dance with Ms. Sachiyo Ito since she was six years old.
She performed the dance in Sachiyo Ito & Co. at Sakura Matsuri in Brooklyn Botanical Garden for eight consecutive years. Recently she modeled in kimono shows at Japan Fest in Atlanta, Georgia in 2016 and Waku Waku +NYC in 2015. Other credit includes Solo vocalist in “World Music” by Baby Einstein in 2009, Choir for the film “Drawing Restraint 9” by Matthew Burney in 2005.

Taiwanese American Arts Council (TAAC), based in New York City, fosters awareness of Taiwanese American art and encourages dialogue on artistic issues within the broader community in the United States. TAAC was established in 2014 to carry forward the mission of the Taiwanese Art Endowment Fund which spurred the creation of a named Taiwan Gallery by the Queens Museum. Dr. Lung Fong Chen and Taiwanese community leaders Thomas Chen and Patrick Huang created an organization to provide a platform for Taiwanese American artists. Professional curator Luchia Meihua Lee, with the pioneer of Taiwan modern print making, Prof. Liao Shiou Ping, provided the expertise and art resources to realize this dream.  TAAC will support cultural and art leaders in different fields and in all states in the US and all counties in Taiwan.

Luchia Meihua Lee
Ms. Lee is the founding Executive Director of Taiwanese American Arts Council. She is a distinguished independent curator, and has successfully curated many significant exhibitions and events at museums, art organizations, and galleries。Ms. Lee is deeply involved in the contemporary art scene in the New York metropolitan area, and she has published numerous catalogues and other written works. She is co-editor of the book entitled Zhang Hongtu: Expanding Visions of a Shrinking World co-published by Duke University Press and Queens Museum. She was Director and Chief Curator of the Exhibition Department of the National Taiwanese Museum of Art, Cultural Specialist at the Council for Cultural Affairs in Taiwan, and curator at the Chinese Information and Cultural Center Taipei gallery in New York City. Her exhibitions have received international acclaim from leading media venues including the New York Times and Wall Street Journal. Ms. Lee studied Art History at the Graduate Center of the City University of New York and pursued doctoral studies in Critical Art at New York University. She is a committee member and art consultant of numerous art organizations, and has served on many art juries.

Tomoko Kawamura
A art consultant and manger, lives and works in Kyoto, Japan. She has organized a number of art events in Japan and internationally.