The Queens Museum is excited to announce our partnership with Photoville 2020 on the presentation of two outdoor photography exhibitions: Q100 by Salvador Espinoza in Astoria Park, and Love Does Not Have Borders by Jeannine Han and BordeAndo in Travers Park. Both projects will be on view from September 17 to March 30, 2021.

Q100 (Astoria Park, Astoria) was photographed by Salvador Espinoza in 2016. The only method of public transportation to and from Rikers Island, the Q100 bus originates in his hometown neighborhood of Long Island City. Beginning its route at Queens Plaza, the Q100 runs along 21st Street through the Queensbridge, Ravenswood, and Astoria neighborhoods, before crossing the commonly referred to “Bridge of Pain” to Rikers Island.

Love Does Not Have Borders (Travers Park, Jackson Heights) is an artistic and political project of BordeAndo, a crochet and embroidery collective made up of immigrant women in Queens, New York. The project reflects on the injustice faced by immigrants enduring family separations along the U.S. border. To produce the work, BordeAndo collaborated with artist Jeannine Han, who designed a series of hand-knitting workshops that included traditional and contemporary textile and fashion techniques. The resulting knitted works express the group members’ cultural and political identity and demonstrates their solidarity with immigrants in the face of crisis.

The Photoville Festival, New York City’s free premier photo destination, returns for a ninth year in a different way – online community and artist programming plus photo exhibitions in public spaces throughout New York City. This annual community gathering features public exhibitions, virtual online storytelling events, artist talks, workshops, demonstrations, educational programs, and community programming. The Photoville Festival provides an accessible venue for photographers and audiences from every walk of life to engage with each other, and experience thought-provoking photography from across the globe – with free admission for all! 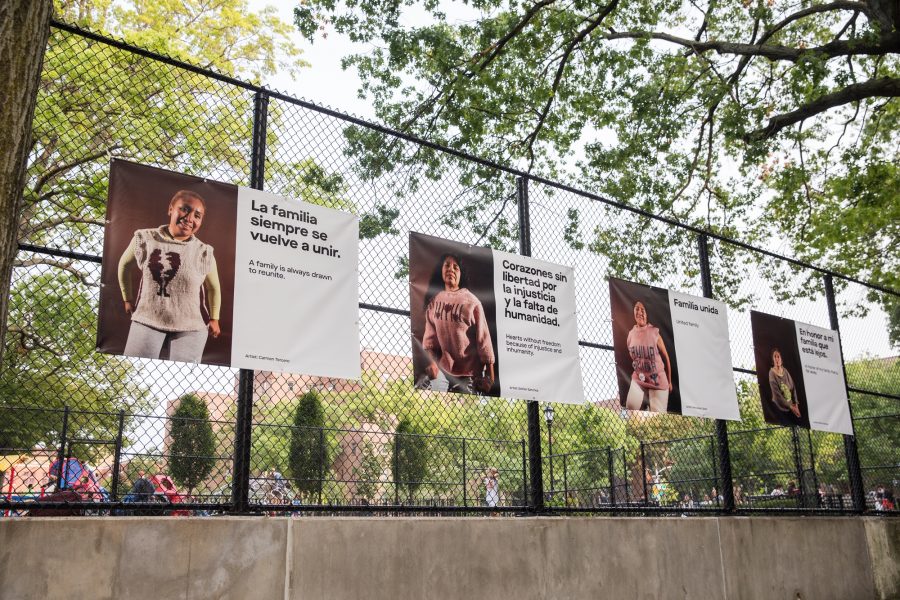 “Love Does Not Have Borders” by BordeAndo and Jeannine Han, installation in Travers Park, Jackson Heights. Photo by Jessica Bal / Photoville 2020. 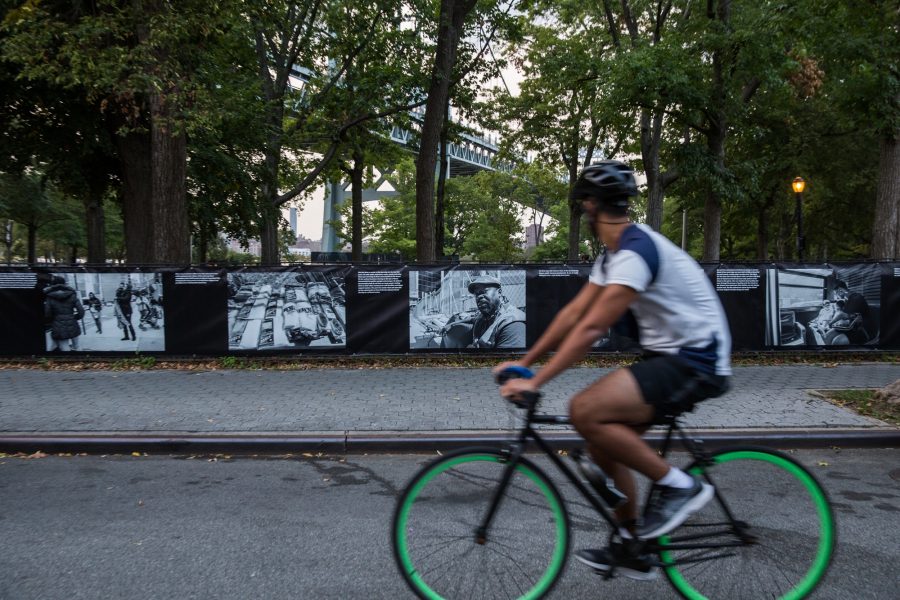 Salvador Espinoza is a photographer born and raised in New York City. Primarily a documentary photographer and photojournalist, he specializes in focusing on social issues by photographing realistic slices of everyday life.

His work has won awards from The Queens Council on the Arts as well as The New York City Council, and has been published in The New York Times, BBC News, and Rolling Stone. He is currently an educator at the Bronx Documentary Center, and is a co-founder of Back to the Lab. He is proud to still call Long Island City his home, where he lives with his dog Miles.

Jeannine Han’s artistic practice includes film, sculpture, and textiles, where the ever-present but elusive body performs as a character, creator, and subject. She is in the Artist-In-Residence Studio Program at the Queens Museum, creating immersive multimedia projects that explore the relationship between pattern, moving image, sound, and technology.

Indicative of Han’s work across media, she is actively involved in socially engaged art by creating collaborations through education. The collaborative work with BordeAndo aims to address the migration and family separation issues happening along the Central American and U.S. border. Through hand-knitting as a practice for self-reliance, the artist works to help raise consciousness and awareness of the psychological effects on individuals and their families.

BordeAndo is a crochet and embroidery collective of Latina women living in Corona, Queens. BordeAndo’s collaborative work in textile arts provides a connection to their heritage, a place to find support in one another through their weekly meetings at the Queens Museum, and an opportunity to engage in political education.

The group’s name is a play on Spanish words, transforming bordando (embroidering) and borde (border) to create BordeAndo. As they make new textile works, the group shares their experiences of migration from Mexico, Peru, and Ecuador, the difficulties faced by undocumented immigrants, and the impact of family separation.

BordeAndo provides a healing space to talk openly and find support in fellow community members, as well as demonstrate joy, beauty, strength, and resilience in the work the members create together. Through the textile arts, the group has strengthened its creative vision and political reflection, by producing collective crochet and embroidery works on topics such as: climate justice, speculative futurism, and gender equity. Their works have been exhibited at the Queens Museum, in Corona Plaza, and in various cultural and organizational spaces.

Image Credits: Q100 by Salvador Espinoza; and Mi niña y yo rompiendo muros llegando a la gran ciudad. / My girl and I breaking walls arriving in the big city by Vicenta Ojeda, photo by Jeannine Han.