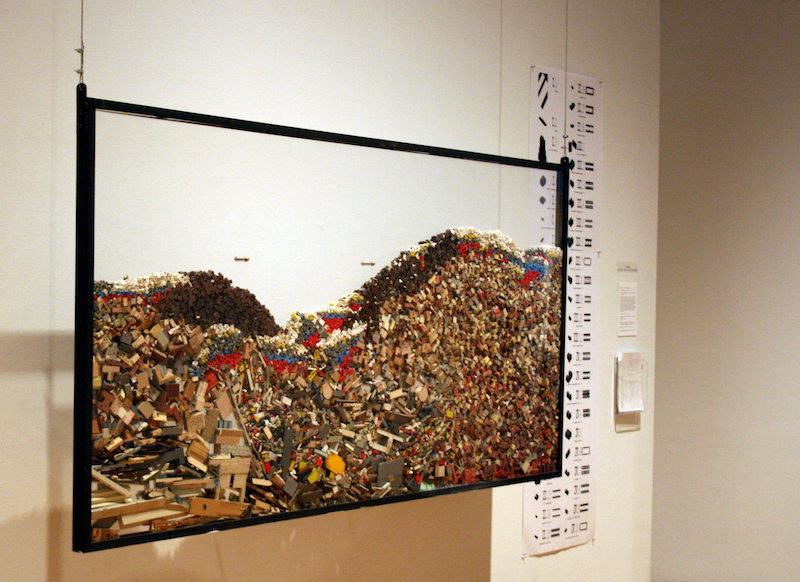 Taking its title from Cuban painter Emilio Sanchez’ statement about why he painted architecture, this exhibition features new acquisitions by Sanchez surrounded by a wide range of works from the Queens Museum collection that take architecture as a point of departure, although in very different ways. Including 10 works by 10 artists and urbanists, the show includes proposals for new ways of living in the city, portrayals of buildings and sites existing and impossible, maps not only of space but also time, and of course, playful and serious interactions with (and one invisible addition to) the unique model on permanent view at the QMA.

With the Panorama of the City of New York as its central component, the museum has had a relationship with architecture at large and New York City in particular from the outset. Among other things, “Structure Has a Life with Personality” contains the results of encounters between the Panorama and artists and urbanists. The Queens Museum building is itself a concrete example of how sites and structures contain history—another theme explored by several artists in this group. Having been first the New York City Pavilion (1939-40) then hosting the United Nations General Assembly (1945-52) then a Pavilion again for the World’s Fair of 1964-65, and finally a museum (1972) which underwent a major renovation (1992), the Museum is currently expanding into the entire structure, to be complete in 2012. Indeed, many artists who have donated works to the QMA have drawn on and critiqued the World’s Fairs’ and the UN’s global optimism about the future, and how those ideas have taken architectural form.

While the artists in the exhibition come from different backgrounds and positions, they share an interest in examining the relationships between man-made structures, their possible pasts and futures, and our daily lives in New York City. While the paintings and drawings of Emilio Sanchez, Seher Shah, and Stephen Talasnik reduce architecture to its basic units, their works remain expressive, and bring us into the realm of the imagination through subjective interpretations of Modernism’s ideal forms. Urban archaeologists—Alan Sonfist, Richard Plunz, and Anthony Auerbach—re-map New York City and New York State along historic (and prehistoric) lines. Like the urbanist Plunz, artists Nils Norman and Damon Rich think of architecture as a place where social, political, and financial relationships are literally and metaphorically embodied, while Jessica Rylan and Bruce High Quality Foundation use the Panorama as a stage for the giant and the tiny, playfully triggering new understandings of our own bodily relation to the city.

Image: Richard Plunz, New York Paleotectonic 1964-95, 1995. 3D sculpture with pieces of the Panorama of the City of New York