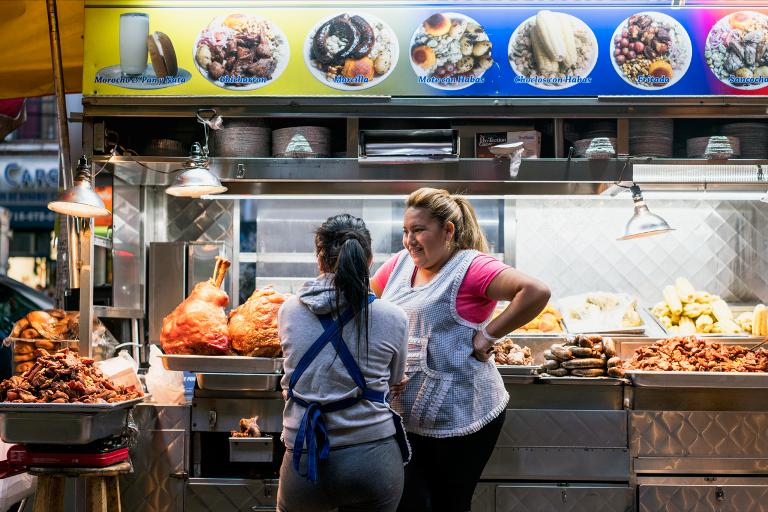 Migrant Kitchens, Portraits and Films, from the Margins highlights those adept conjurers of taste in spaces on the street, in the community, and at home. For they are our culture creators—by their presence and persistence—they fortify our dynamic and shifting cultures together, daily.

Migrant Kitchens features the strength, diversity, and creativity of immigrants who work in the food industry in Queens, New York. Migrants, across the country, are under siege from multiple angles. Those who work at the margins are especially vulnerable. Migrant Kitchens humanizes, and makes their lives visible, combating relentless negative stereotypes.

Media about food are everywhere. A large movement across the nation researches, writes, films, photographs, farms, cooks and advocates for just food and a just food system. Yet inclusive media institutions—owned and run by diverse people—who focus on multicultural voices of those who work on the edges of the industry, are heard and seen less. Moreover, the people behind the food, urban food workers and migrant kitchens, are excluded or even tokenized.

The portraits and films are candid, up-close, and borne from a slower engagement. We began our film explorations in some of the most ethnically diverse neighborhoods: Jackson Heights, Elmhurst, Corona, Flushing, Forest Hills, and South Ozone Park. The photographs and films required community commitment to organizations that serve immigrants and street vendors. At one event about how to be an ally, a community youth organizer from DRUM stated, “Those who are most affected by negative immigrant policies are the ones who should determine policy.” While another community leader affirmed, “We don’t want your money anymore, we want your active participation in our struggle.”

Migrant Kitchens wants to diversify not only who tells the stories but also the stories told. That means creating, at the core, more inclusive media institutions. And insisting on reporting on stories that reflect our varied citizenry.

All photos and films by Sarah K Khan