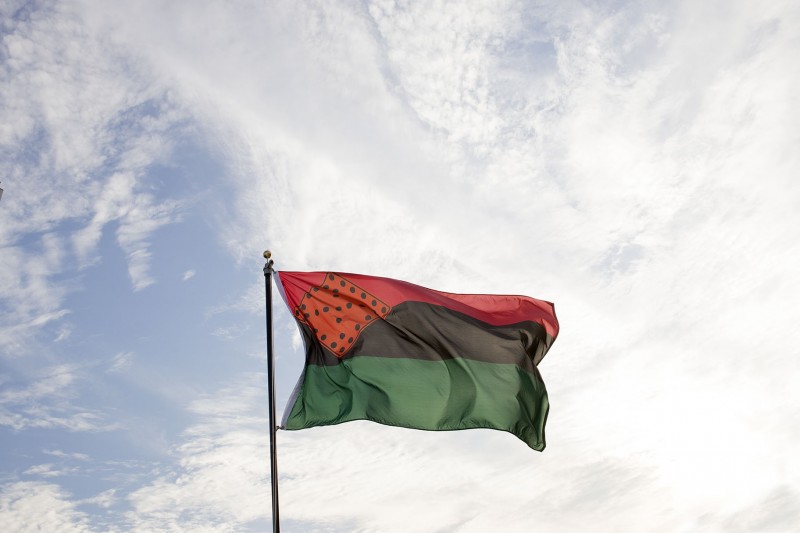 “Several of these hole patterns are drilled into the floorboards of one of the oldest African-American churches in the United States in Savannah, Georgia. It is believed that the drilled pattern functioned as breathing holes for runaway slaves who, hiding under the floor, awaited safe transport north,” explains artist Nari Ward. “The union of that moment and of Garvey’s black nationalist flag acknowledge the resilience of the human spirit to survive even as we continue to need to be reminded here in America that Black Lives Matter”.
Nari Ward was born in St. Andrew, Jamaica, and lives and works in New York. The Jamaican artist is known for his compositions of neighborhood-found objects that address issues of consumer culture, poverty, and race—from his installation of disposed strollers at New Museum to his transformation of typical outdoor structures, like playgrounds, into playful objects in his newest installation G.O.A.T., again. Ward won this year’s Vilcek Prize, which honors immigrant artists who have made a lasting contribution to U.S. culture through their art.
Ward graduated with a BA from City University of New York, Hunter College in 1989 and received an MFA from City University of New York, Brooklyn College in 1992. Ward’s work has been widely exhibited on an international level, and he has had solo exhibitions at The Barnes Foundation, Philadelphia, PA (2016); Pérez Art Museum Miami, FL (2015); and elsewhere. Ward’s solo exhibition G.O.A.T. is currently on view at Socrates Sculpture Park in New York City. TILL, LIT, Ward’s latest exhibition at Lehmann Maupin, is also on view through August 25, 2017.
Pledges of Allegiance is a nationwide public art project by Creative Time. The project is a serialized commission of sixteen flags, each created by acclaimed contemporary artists: Tania Bruguera, Alex Da Corte, Jeremy Deller, LaToya Ruby Frazier, Ann Hamilton, Robert Longo, Josephine Meckseper, Marilyn Minter, Vik Muniz, Jayson Musson, Ahmet Ögüt, Yoko Ono, Trevor Paglen, Pedro Reyes, Rirkrit Tiravanija, and Nari Ward.
Each flag embodies art’s ability to channel political passion, providing a unifying symbol around which to unite, as well as a call-to-action for institutions nationwide to raise upcoming Pledges of Allegiance flags in solidarity with Creative Time.
Pledges of Allegiance aims to inspire a sense of community among cultural institutions, beginning with an urgent articulation of the political demands of the moment. Each flag points to an issue the artist is passionate about or a cause they believe is worth fighting for, and speaks to how we might move forward collectively as a country. To inaugurate the project, Creative Time raised Marilyn Minter’s RESIST FLAGon the roof of its headquarters on Flag Day, June 14.
Pledges of Allegiance was originally conceived by Alix Browne and developed in collaboration with Cian Browne, Fabienne Stephan, and Opening Ceremony.
To share the project on social media use the hashtag #PledgesofAllegiance.
Translate this page: