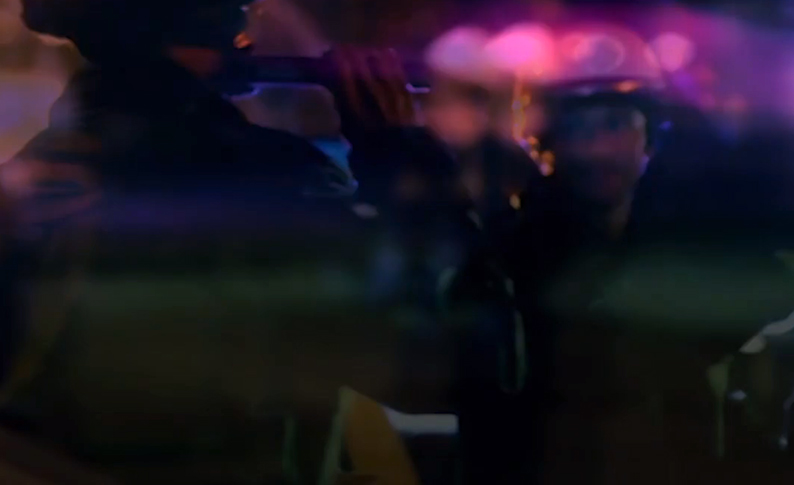 Sable Elyse Smith’s project at the Queens Museum, Ordinary Violence, continues her ongoing exploration of the trauma and emotional violence affected on incarcerated individuals and their loved ones. Mining her own experiences of visiting her father in prisons for the past 19 years, Smith will present a combined media installation involving video, neon, photographic and textual works to visualize the ways in which an impersonal bureaucratic system of incarceration take effects on the bodies and minds of the extended network of people bound to it.

A central focus of the exhibition is the ubiquity of the mural art form as a backdrop for the Polaroid photos taken in prison visitation rooms, as well as the microeconomy and unspoken negotiation embedded in the creation and circulation of these images—which must be purchased with many hours of labor by the inmates. In a sharply registered contrast, very intimate moments are almost choreographed by the regulatory strictures of the visitation, and are enacted by a number of variously connected and detached agents: muralist, guard, photographer, camera, visitor, inmate receiving a visit, inmates not receiving a visit, and the room of spectators.

Sable Elyse Smith is a recipient of the 2016-2017 Queens Museum/Jerome Foundation Fellowship for Emerging Artists, and has spent the past year working closely with curators and other staff members, optimizing opportunities to expand his practice. Smith, Julia Weist, and Ronny Quevedo, were selected by a panel that included Michael Conner (New Museum, New York), Lydia Yee (The Whitechapel Gallery, London), and Hitomi Iwasaki, Director of Exhibitions/Curator, Queens Museum.

Sable Elyse Smith (b.1986, Los Angeles, CA) is an interdisciplinary artist and writer. She holds an MFA from Parsons, and has performed at The Museum of Modern Art, New York City; New Museum, New York City; Eyebeam, New York City; and Yerba Buena Center for the Arts, San Francisco. Her work has also been screened at Birkbeck Cinema in collaboration with the Serpentine Galleries, London, Artist Television Access, San Francisco, and MoMA PS1, New York City. Her writing has been published in Radical Teacher, Selfish, Studio Magazine and with Recess Art’s Critical Writing Fellowship. Smith has received awards from Creative Capital, Skowhegan School of Painting and Sculpture, the Franklin Furnace Fund, NYSCA Individual Artist Program in Film and Media and Art Matters. Smith is currently a part-time faculty member at Parsons The New School for Design and will be a visiting Faculty at Virginia Commonwealth University this fall in the Sculpture and Extended Media Department. Smith lives and works in New York City.

Sable Elyse Smith: Ordinary Violence is made possible by the Jerome Foundation, celebrating its 50th anniversary.