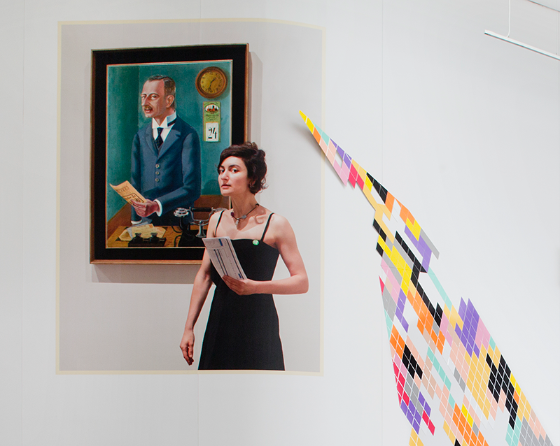 Anna K.E’s Profound Approach and Easy Outcome will be the third iteration in a series of site-specific commissions by women artists on the Queens Museum’s Large Wall. Measuring 140 feet wide by 45 feet high, this architectural highlight forms a magnificent diagonal and is highly visible from outside in Flushing Meadows Corona Park through floor-to-ceiling windows, visually drawing park-goers inside and impacting their experience once they arrive. Taking maximum advantage of the spatial dynamics of this significant wall, Profound Approach and Easy Outcome performs a complex reflection on artistic production, feminism, power, and the role of institutions. Among five visual elements affixed to the Wall, billboard-size photographic works will depict the artist in action in the galleries of the Metropolitan Museum, posing as the depicted characters in renowned master portraits by Otto Dix and Balthus. K. E.’s work considers her own role in art history, fusing the question of male-dominated canons with her comically intuitive and gestural responses.

Commissions for the Large Wall Series at the Queens Museum are made possible by the National Endowment for the Arts, The Ferriday Fund Charitable Trust, and The Shelley & Donald Rubin Foundation. Support for Profound Approach and Easy Outcome is provided by Deborah Goodman Davis and Gerald Davis, Dr. Ulrich Koestlin, Ignacio J. Lopez and Laura Guerra, and Jennifer Vorbach. Special thanks to Simone Subal Gallery, New York.
Exhibitions at the Queens Museum receive significant support from Ford Foundation and the Charina Endowment Fund. Major funding for the Queens Museum is generously provided by the New York City Department of Cultural Affairs, the New York State Council on the Arts with the support of Governor Andrew Cuomo and the New York State Legislature, Lambent Foundation, Booth Ferris Foundation, The Kupferberg Foundation, and the Laurie M. Tisch Illumination Fund.