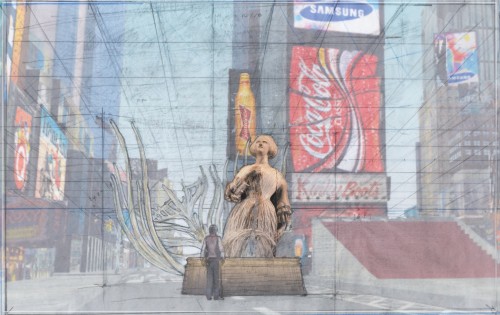 Join us for the public opening of Mel Chin’s latest works as part of All Over the Place in Times Square, in a major partnership with Times Square Arts.

The physical construction of Wake is underway at the University of North Carolina at Asheville’s STEAM Studio, and is a collaboration between the Engineering and Art & Art History, and Drama Departments with assistance from faculty, staff, other students, and community members, all under the direction of Mel Chin Studio.

The physical presence of Wake will serve as an entry point into Unmoored, an ambitious 21st Century mixed-reality public art project that will be a draw for all ages and backgrounds.

Unmoored explores a potential future where global warming has gone unchecked – and through mixed reality guests will experience an unprecedented phenomena in the heart of Times Square. Through an app developed in collaboration with Microsoft, Unmoored allows guests to explore this surrealistic spectacle, creating an experience that blends the physical world with the digital world. The Microsoft app will be ready to download on July 11 via this link.

The two public artworks immerse the heart of Times Square in the discussion around climate change. Scenarios on the ground at Broadway Plaza between 46th and 47th Streets, and in the “virtual air” of mixed reality, will combine in an ambitious, interactive installation.