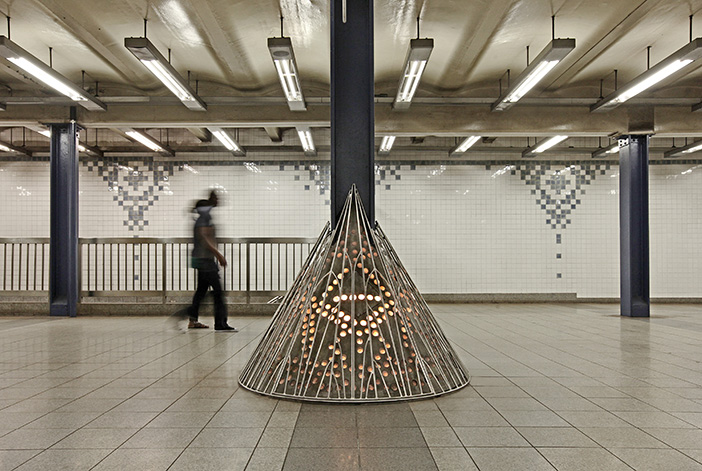 Mel Chin’s Signal is a permanent installation that was completed as part of MTA Arts & Design’s Broadway-Lafayette station rehabilitation in 1997. For this project, Chin’s concept was to insert Native People’s presence, as a living culture, onto the Dutch-derived tile infrastructure found in MTA stations.

Broadway follows the Wickquasgeck Trail of the Native Americans that was stopped by the Dutch colonists’ fort wall (Wall Street). For the installation Chin designed light “signals” patterned after “Council Fire” badges, masonic symbols reimagined by 18th Century Iroquois silversmiths. Stainless steel cones at the bases of structural columns burn, or light up, to notify passengers of an oncoming train. Chin invited G. Peter Jemison (Heron Clan-Seneca) to consult with his leaders and design an official wampum-belt message in tile. This statement affirms that they are here, holding strong and extending peace.

On the occasion of All Over the Place, Chin and members of the Six Nations will rededicate the piece to honor their contributions to the city of New York.

The ceremony will be hosted by five members of the Six Nations who’ll share remarks on current climate justice conflicts in the region. This will be followed by the installation of a new plaque commemorating the contributions of indigenous cultural bearer, G. Peter Jemison (Heron Clan-Seneca), in the production of the work–; a public action that joins the current debate surrounding the role and meaning of public monuments in reckoning with a more complete understanding of U.S. history.

A community dinner and discussion with indigenous cultural bearers will follow the event at Kenkeleba House, co-hosted by AMERINDA and No Longer Empty. From 7:30-9:00pm, the dinner will take place within an exhibition of archival photos of the Mohawk steelworkers and other indigenous communities living in the Boerum Hill and Cobble Hill area of Brooklyn during the 40’s, 50’s and 60’s. For tickets to this dinner, please email programs@nolongerempty.org (limited seats available).

These images will be shown alongside works by three contemporary, female Native American photographers currently living in New York City. Works on display will be curated by Amerinda and on view at the Kenkeleba House gallery. Food for the event will be inspired by traditional indigenous cuisine of the Americas, designed by members of AMERINDA and a local First Nations chef. Including these photo exhibitions and cuisine at the gathering will create a direct connection to the value brought to New York City and our country by First Nations cultures, and help forge deeper connections across this network of potent creators—a reality we are eager to amplify and support.