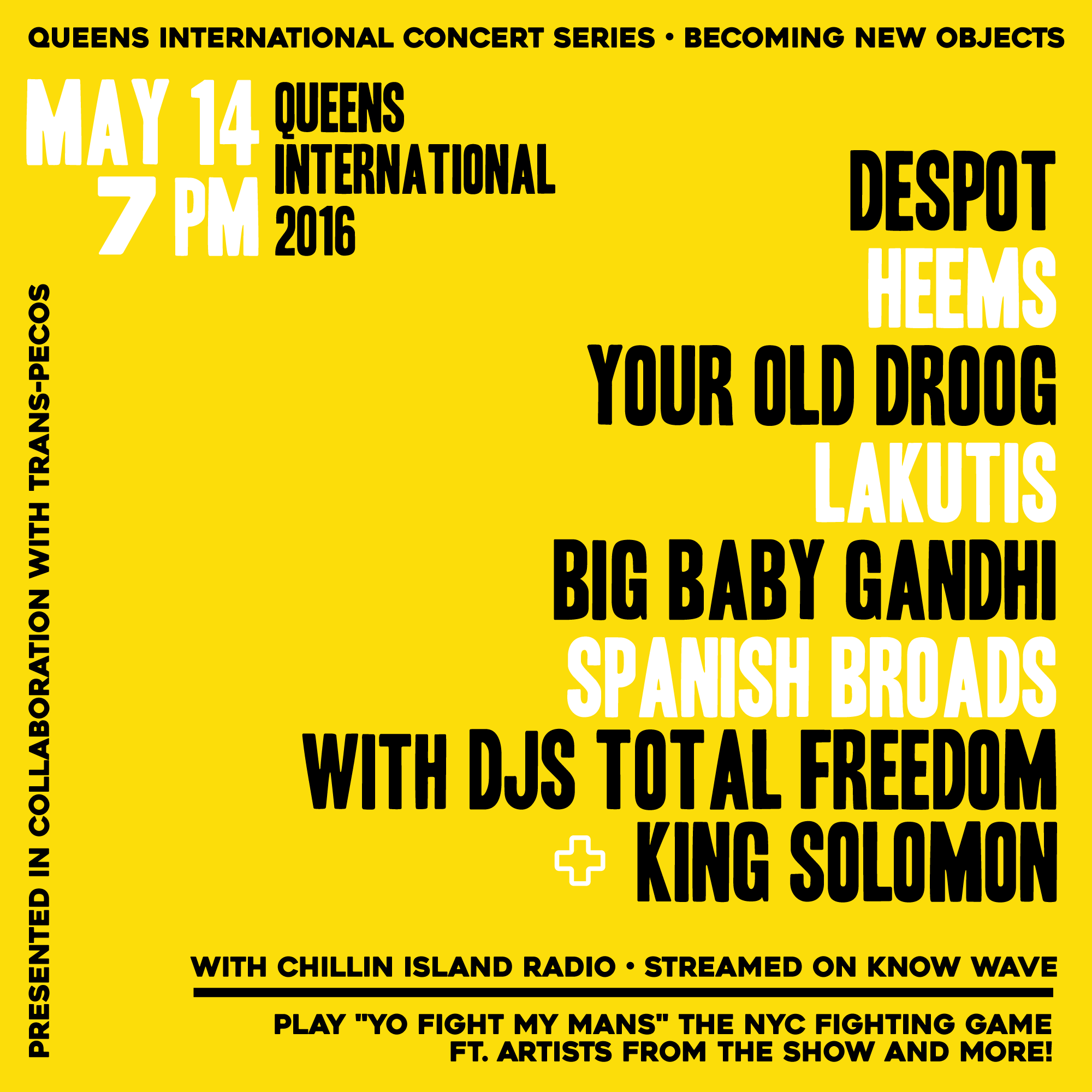 Please note there is limited parking due to another event in the park. Public transportation/car service is highly recommended.

Tickets available here ($12) or at the door

As part of the Museum’s biennial celebration of the borough, Queens International 2016, the Queens Museum is partnering with Ridgewood venue Trans-Pecos to present Becoming New Objects, a series of concerts and experimental music events. The program features a broad range of emerging and established performers whose work engages with the notion of “possible futures.” The events will feature surprising pairings that challenge distinctions between genres, media, and communities.

The May 14th concert is presented by Chillin Island, a collective of Queens born and bred musicians and artists that host a weekly program on Know-Wave radio. Chillin Island was founded by Ashok Kondabolu (aka Dap) and hosted with rappers Despot (Alec Reinstein) and Lakutis (Aleksey Weintraub). Queens rapper Heems (Himanshu Suri) headlines with Despot, the legend from 108th Street. Noise-rock supergroup Spanish Broads will reunite for the first time in six years, followed by a cohort of New York rappers: Flushing-bred Bangladeshi Big Baby Gandhi, Uptown’s own Lakutis, and Brooklyn’s Your Old Droog. Closing out the night is a DJ set from Total Freedom, with additional music provided by King Solomon.

Concurrent with the show, Chillin Island will premiere the latest iteration of YO FIGHT MY MANS: THE GAME, an old-school fighting arcade game with characters based on local legends such as Aaron Bondaroff (aka A-Ron), Venus X, Heems, the Chillin Island crew, and more. Players can choose their characters and duke it out in settings like the subway, a bodega, the museum itself, and other locations. The game, designed by Prashast Thapan, will be playable on multiple screens housed in Chillin Island’s installation Hi, Mom, Hi Dad, It’s Me Again a full-scale recreation of Dap’s childhood Jackson Heights living room with a twist (created by Ashok Kondabolu, Sonya Belakhlef, and Jacob Reinstein.)

The night’s festivities will be streamed live on the Know-Wave radio network.