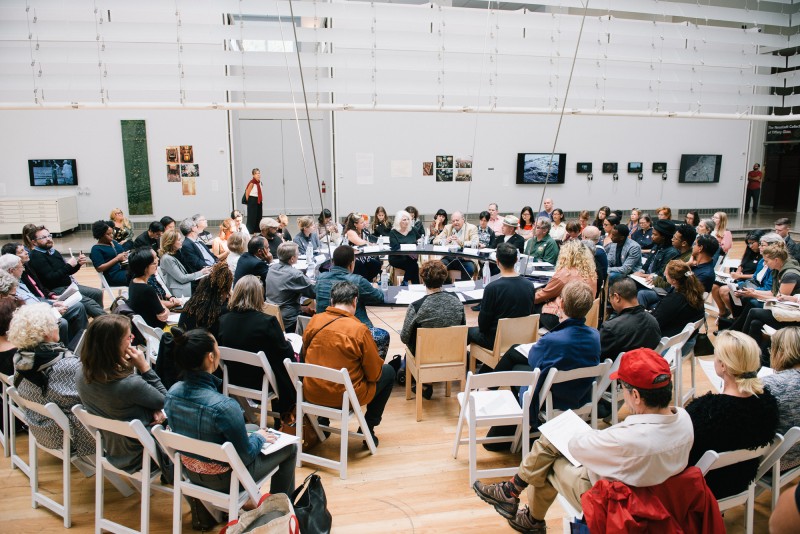 Mierle Laderman Ukeles’ Peace Table, serves as the site for convenings on peace, from the personal to citywide. Ukeles and the Museum have conceived a series of public programs meant to engage and contemporize some of Mierle Laderman Ukeles: Maintenance Art’s important themes. The series includes three round-table conversations at the Peace Table with activists, artists, city workers, and other experts;  a day of readings on peace in memory of Martin Luther King, Jr., and a tour of Freshkills Park led by Ukeles including the future site of her major public artwork Landing.

September 25, 2016, Artists in/of the City An exploration of embedded artist residencies in city agencies, anchored by Tom Finkelpearl, Commissioner of New York City Department of Cultural Affairs, and featuring artists and city representatives from around the country.

November 20, 2016: Freshkills: From Landfill to Park A tour with the artist and city officials about the transformation of the former 3,000 acre landfill, the process behind remediation and its relationship to Ukeles’ Percent for Art commission Landing, the first permanent work of art to be built in the future Freshkills Park.

January 15, 2017: A Day of Readings on Peace On the occasion of Martin Luther King Jr. Day. Texts on the topic of peace will be gathered from many sources, cultures, and languages. Volunteers will read them aloud throughout the day creating as Ukeles says “a momentum of energy toward the possibility of peace that will fill up the soaring skylit space.”

February 5, 2017: Human Agency: A Day of Transfer and Exchange In a performance with the artist. Visitors are invited to commit to “repair the world.” Ukeles will also be introducing her Fresh Kills-related proposal for one million people to participate in a public artwork (Fresh Kills: Public Offerings Made By All, Redeemed by All).